Blinded by science: the problems of sorting out identity in Africa – By Keith Somerville 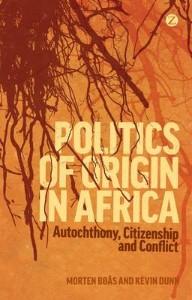 The concept of autochthony – that one is entitled to “˜belong’ because of ancestral rights or “this is ours because we were here first” (p. 1) – is in many ways an attractive one when looking at political, economic and military conflict in Africa.  Land is and always has been a key factor on a continent where agriculture is still at the heart of most economies and non-urban communities.  Bí¸í¥s and Dunn have chosen it as their focus for looking at issues of identity in Africa and use it to examine conflicts in Liberia, Kenya, the DRC and Ivory Coast.  In so doing they appear to consciously reject economic factors other than land in explaining motives for competition and violence and also suggest autochthony is more appealing and applicable than ethnicity because it implies a sense of belonging and of being somewhere first.

In this I think there is a level of reductionism that doesn’t work – because if “we were here first” is the crux of the approach then how is “we” to be defined?  Ethnicity is a social political construct that incorporates many factors – not least myth – and is part of how people define themselves, and having done so, seek as a community or social entity to first survive and then thrive.  Land is at the heart of that search but so is water, fuel, shelter and ultimately less tangible forms of wealth than just land.

That is not to say that Bí¸í¥s and Dunn’s work does not offer interesting insights and provoke a variety of reactions, all of which can lead to analysis, debate and knowledge of what fuels conflict.  But the exclusion of some factors and the reduction to “who was here first” is too narrow and simplistic and ignores a host of factors that affect social, political and economic structures in Africa.  Added to this is a rather redundant and extraneous section attempting to apply Freudian ideas of melancholy to conflict in modern Africa.

Many readers will also find that a jargon-based approach to explanation does little to explain how the “˜autochthony trope’ can be applied to actual case studies.  The authors get bogged down in convoluted sentences that take time to unravel and seem contradictory or just empty. For example, “autochthony discourses appear to provide a sense of primal security and certainty, yet they are inherently unstable and slippery.  The very plasticity of autochthony is one of the reasons for its attractiveness…” (p. 15).  This becomes so slippery that it fails to provide criteria for application that are clear rather than endlessly malleable.

On the next page we find the autochthony trope described as both “˜ubiquitous’ and “˜diverse’ (later it is “˜relative’).  Even less helpful is the idea that groups and individuals employing autochthony are engaged in state-making, the evidence (even in the case studies in this book) suggest rather that autochthony is employed from the top down to gain political power within an existing, if flawed, state structure and to exclude others, and is also used by political leaders to challenge the statist status quo.

The case studies used are interesting but are in many ways too short and so involve the contraction of narratives of politics and conflict that lead to a less than accurate portrayal of events. Take the Kenya study – using an admirable set of sources (Lynch, Anderson, Lochery  and Lonsdale, to name a few) the chapter looks in particular at the 2007-8 post-election violence but misses one of the key points – while there is evidence that groups within the ODM and PNU had prepared for violence and organized armed groups for this purpose and to intimidate opponents during the campaign, the primary violence came in the form of brutal and extensive police repression of demonstrations by the ODM against the fraudulent claim by President Mwai Kibaki’s PNU of victory.  It was this event which acted both as a catalyst and a justification for the violence against Kikuyu and Kisii; this in turn was a justification for Mungiki-led Kikuyu reprisals.

The authors are right that in this conflict the use of land-related grievances and arguments based on autochthony were top down ones, but they ignore the constantly shifting alliances in Kenya.  Kenya’s communities usually vote in blocks, but they do not always vote against the same opposing alliances. In 2002 a Luo-Kalenjin-Masaai-Kikuyu alliance fought against a Kikuyu-Kisii-Embu-Meru one that was nonetheless supported by the former President and Kalenjin leader Daniel arap Moi. The Kikuyu and Kalenjin political leaders were divided – Kibaki v Kenyatta and Ruto v Moi.

In 2007 the Luo-Kalenjin-Masaai fought the Kikuyu-Kisii-Embu-Meru for votes.  In the recent elections, a Luo-Luahya-Kamba alliance fought a Kalenjin-Kikuyu one – the latter being represented by Uhuru Kenyatta and William Ruto, who are charged by the International Criminal Court with commanding rival gangs during the post-election violence five years ago. Autochthony does not explain the shifting alliances, the use of fear, atrocity, past conflict or competition over state resources and power of patronage rather than just land.

The authors have produced an interesting book but one that would have benefited from a less reductionist, more easily readable approach and one that took note of the important work of Chris Cramer on civil wars, David Keen on Complex Emergencies and Hobsbawm’s and Ranger’s key work on the invention of tradition. Autochthony is a useful approach but not in isolation or as a rather blunt (but plastic) instrument.  They must, also, lose the obfuscatory jargon.

Keith Somerville is a Senior Research Fellow at the Institute of Commonwealth Studies, teaches at the University of Kent and runs the Africa – News and Analysis website (www.africajournalismtheworld.com).