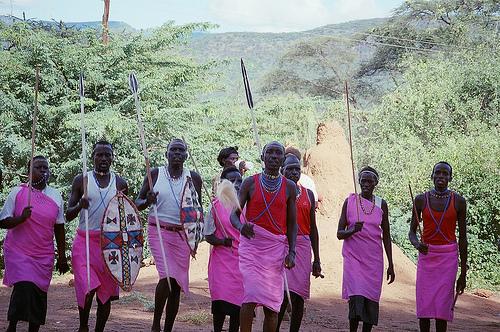 The Endoris, a minority community of about 60, 000 people lives a precarious life in the North Rift Valley Kenya. In 1974 the government forcefully evicted the community from its ancestral land to pave way for a game reserve. The community lost its lifestyle and livelihoods forcing them to become squatters who now sit on a semi-arid land kilometres away from their original home.

“Lake Bogoria is the land of our ancestors, they settled there from Sudan 2000 years ago, the government moved us to this dry place that does not have food and water for our animals, we cannot conduct our rituals here “ said Cathereen Kandie, an Endorois elder.

The community sued the government for eviction and won the petition before the African Commission on Human and People’s Rights (ACHPR) in February 2010.

Cathereen was among three women and a man from the community who returned to the commission in 2011 urging it to put pressure on the government to implement its hitherto unimplemented recommendations.

The commission had directed the government to ensure unrestricted access, restitution, compensation and royalties to the land.

It is a snapshot of actions being taken by communities in Kenya and Africa who researchers say are not sitting back as local and foreign investors dislodge them from their land for purposes of development.

“People who are feeling short-changed in large scale land acquisition are increasingly becoming aware of their land rights and are using a variety of ways to seek justice and demand accountability from the authorities that preside over such deals” Says Emily Polack a researcher at International Institute for Environment and Development (IIED).

To raise their concerns, different communities are using courts and other legal mechanisms, requesting an audience with authorities, working with NGOs, civil societies, religious leaders, media, political parties, and forming local associations to strengthen negotiating power and resorting to demonstrations should other routes fail.

“The outcomes of citizens’ actions can be tangible and intangible” says Polack adding that if the actions result to cancellation of a land deal, the cancellation is as non-transparent as the signing.

After the Endorois victory, the Ogiek, a traditionally hunter-gatherer community that claims Mau forest in Rift Valley province to be their traditional home followed suit.

“We filed a petition with the commission in May 2011 seeking to stop the government from evicting the Ogiek from Mau forest, actually in March 15 2013 we got interim orders directing the government to stop further actions in Mau until our cause is heard and determined,” Daniel Kobei, executive director of Ogiek People’s Development Programme said.

In April 2013 research findings by (IIED) and International Development Research Centre (IDRC), the accelerating large scale land acquisitions processes in Africa and other parts of the world are lacking accountability and are locking out communities.

Experts say large scale land acquisition is a matter of human rights hence public accountability is critical as it enables local people to voice their concerns.

According to Lorenzo Cotula a researcher at (IDRC), the international investment law is strong and offers great protection to investors who seek to acquire large areas of land.

“On the flipside, national laws legitimize abuse of power against the powerless,” says Cotula.

According to Odenda Lumumba, Coordinator of Kenya Land Alliance that champions reforms of policies governing land, “land rush” in Africa peaked in 2008 following the global food, fuel and financial crisis.

Lumumba says property rights in many emerging markets are dysfunctional to the point that ownership of land can be granted to an investor without the tens of thousands of people living on or dependent on the land knowing about the mega deals.

Defenders of land rights warn that displacement of communities from their land rob them off land rights and often spark conflict over resources.

The IIED report says that despite a new wave of progressive land laws in various countries, some important features tend to undermine pathways to accountability.

Tanzania passed the Land Act and Village Land Act in 1999 but only 850 villages have obtained a certificate for their village land out of an estimated total of between 11, 000 and 14,000 villages.

In its 2012-2013 survey, Rights and Resource Initiative RRI an organization advancing land, market and policy reforms, only 0.4% of forest land is owned by local people in Africa.

The Land Matrix Partnership, a global alliance of civil society and intergovernmental organizations says that 260 land deals are in East Africa, 216 in South East Asia and 132 in South America. 200 million hectares of land have been “˜grabbed’ in Africa since 2001 LMP claims.

Klaus Deininger a lead economist at the Development Research Group who conducted a research on land acquisition commissioned by the World Bank says in many African countries and other places where land ownership is not respected or recorded, details on investments are treated as confidential locking out communities.

“Mozambique is taking back land sold to investors because much of it is sitting idle, not growing sugar cane or other crops as promised by the investors,” said Deininger.

After she was elected, Liberia’s President Ellen Johnson Sirleaf abolished all existing logging concessions. She also directed an audit of $8 billion contracts signed by ministers and corporations.

The World Bank says 70 percent of the current demand for land is in Sub-Saharan Africa. The bank advocates for stronger and clear land rights that allow communities to benefit from economically viable and secure projects.

Peter Kahare is a journalist based in Nairobi.