The Ringtone and the Drum: travels in the world’s poorest countries – By Francesca Washtell 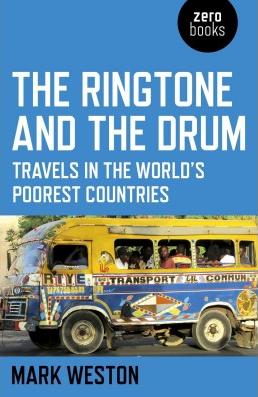 In his first book, Mark Weston has given himself the challenge of observing the daily life of people in three of the world’s poorest countries: Guinea-Bissau, Sierra Leone and Burkina Faso. I was fascinated by the journey that Weston and his travel companion and wife Ebru go on in The Ringtone and the Drum, which interweaves anecdote, personal experience and historical account as they spend months travelling through these three under-visited West African countries.

Having said that, I almost put the book down after the first page when, in the Prologue set in Senegal, Weston describes (in this first sentence no less) that when you step out of the plane “West Africa smothers you in her treacherous embrace” and that she also “dismantles your defences”, strips you “of your layers of protection” and leaves you naked and vulnerable, “powerless to stave off her arsenal of threats”.

I felt let down by this “˜Mother Africa’ rhetoric and Heart-of-Darkness-where-everything-is-very-visceral-here language, which should survive in books written as long ago as possible (if they have to remain in print at all). It’s never clear if writers and publishers think this is what readers are expecting from a book about Africa or whether authors can find literally no other framework through which to record their experiences on the continent. Fortunately it seems to be the former. What follows is a travelogue that is incredibly sensitive to nuance and detail.

Weston’s background as an international development professional is a great strength of the book, and gives him a sophisticated understanding of many of the processes at play, something that would go over the heads of many backpackers. He is able to offer detailed political-economy type analyses of issues such as famine and malnutrition in the Sahel and rural-urban migration in Guinea-Bissau, bringing to life the stories of the people he meets along the way.

In Bissau he finds almost entire village communities have made the journey from rural areas to town in the hope that job opportunities will arise. This has created a network of neighbourhood strongholds in the capital city; where tight-knit communities remain together, creating social buffer zones from the usual dislocation that young people who move to a city alone often experience (something that Weston observes when he visits Freetown).

To those who are used to travel accounts being meticulous about dates and chronology, this book is a welcome diversion from the norm. As much about the impression of travel in West Africa as the nuts and bolts of day-to-day routine, the book is structured around short, essay-like chapters and the dates, even the year in which Weston and Ebru travel is never mentioned. This gives the book an almost timeless quality that might help it last as a treatise on globalisation in the developing world.

Processes associated with globalisation have dramatically affected the lives of Africa’s under-30s, who comprise up to 70% of the continent’s population. They are the ones traversing lives of minimal economic opportunity whilst often remaining culturally suspended, as few men in particular can afford to pass through the traditional rites of passage that allow them to be adults in the eyes of their communities.

I found the strongest section of the book to be the section in Guinea Bissau. An excursion to the Bijagos Islands reveals the extent to which they have been infiltrated by the Colombian drugs trade. The islands now resemble an autonomous archipelago over which the mainland government has little control. The drugs trade in Guinea-Bissau reputedly rises all the way up to a former President, whom it is alleged would sneak Class-A drugs in his suitcase through airports, knowing that he would not be searched.

Weston should also be praised for his honesty in dealing with the tricky issue of his own near-breakdown in Burkina Faso. By the time he and Ebru arrive there West Africa has unmistakably gotten under his skin, a condition that the French have long called “Soudanite”. After a time, encountering poverty arouses anger far more than guilt and Weston slips into depression.

The questions of deep faith raised by the unending poverty, coupled with the lack of trust people have for human systems, are dealt with artfully – becoming a central theme of the book. Whether it is Christian or animist, Weston’s attempt to surrender his Western mind to the magic and superstition of West Africa is a core theme throughout. By the book’s conclusion I began to understand why Weston referred to West Africa in such mystical terms at the outset. The care he has taken along the way leaves a well-crafted travel memoir that appreciates the complexity of countries that have received little mainstream traveller attention.