Politics
Home›African Arguments›Politics›Djibouti, Democracy and the Horn of Africa – By H.E. Mahamoud Ali Youssouf, Minister of Foreign Affairs of Djibouti

Djibouti, Democracy and the Horn of Africa – By H.E. Mahamoud Ali Youssouf, Minister of Foreign Affairs of Djibouti 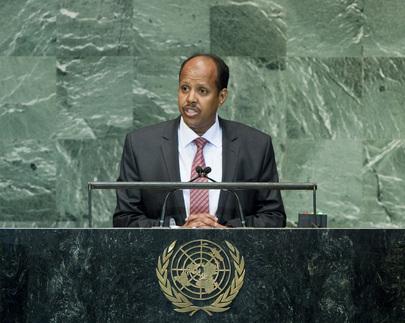 As the world gathers in London today to discuss how to secure a stable and prosperous Somalia, it is important to recognize the changing dynamics and critical issues at play in the Horn of Africa. There have been encouraging signs that the international community’s involvement in Somalia and the region, fighting terrorism, piracy and underdevelopment, are making critical gains.

The stabilization and economic development of the Horn of Africa relies on four pillars:

These four challenges are not easy to achieve. There are very serious obstacles on the road, but we have reached a consensus that this is the way forward.

Djibouti has been praised for playing a constructive role in stabilising the region and in working towards a resolution of the Somalia crisis. But we believe that our role is to go beyond that and to set an example in the region, demonstrating our own progress on these four pillars. This is important not only for our citizens but for the benefit of the entire region.

Economic prosperity The African continent is experiencing an unprecedented economic boom and we need to ensure all of society benefits. A key enabling factor for achieving sustainable prosperity is the growth of intra-African trade as well as trade with the rest of the world. Djibouti is blessed with a strategic position. Ethiopia, a thriving country and economy of over 80 million people, relies extensively on Djibouti as its pathway to the sea. We hope to become a gateway not just for our immediate neighbours but for all of East Africa – connecting the region to markets in Europe, the Middle East and Asia and bringing economic benefits to our citizens and the region.

Rule of law and effective institutions Djibouti’s effective state institutions are a key factor in our country’s international recognition as a beacon of stability in the Horn of Africa. It is therefore no surprise that it is home to the only US military base on the African continent, France’s largest military base in Africa and the European Atalanta anti-piracy force. For much of Africa, including Djibouti, the fight against corruption is a paramount concern and an area we work closely on with international partners.

Democracy In 2012, the opposition in Djibouti won local elections for the first time and currently controls two of the three municipal councils in the City of Djibouti. Parliamentary elections in February 2013 marked a new milestone in the strengthening of Djibouti’s democracy, with the introduction of a semi-proportional electoral system to ensure broader political representation. Inaugural debates between candidates of the opposition and the majority were broadcast on national television to provide our citizens with an informed and balanced understanding of the parties. The opposition won 20% of the seats in the parliament. The four international observation missions as well as major Western embassies, including the US and France, all concluded that the elections were peaceful, free and fair.

Tolerance and religious accommodation Like much of our region with a long tradition of Islam, there is an important balance to be struck between respecting religious beliefs and effective secular institutions. Djibouti has seen a recent rise in forces of radical Islam, aiming to exploit religion for political gain. Following elections earlier this year, some religious leaders publicly called for and committed violent acts. Fortunately the general population and mainstream opposition movements distanced themselves from these few. However, this rise of such clerics refusing to play by the democratic rules is a worrying sign for the entire region.

The importance of these four pillars of stability and prosperity cannot be overlooked. As partners in the Horn of Africa and Somalia’s future, it is our responsibility to ensure our discussions and actions promote effective, capable and accountable governance across the region, neutralising the threat of piracy. Our success in London will impact not only the Somali or Djiboutian people, but the broader international community.

For more information on Djibouti we recommend Djibouti: Changing Influence in the Horn’s Strategic Hub – a new report from Chatham House (Ed.)