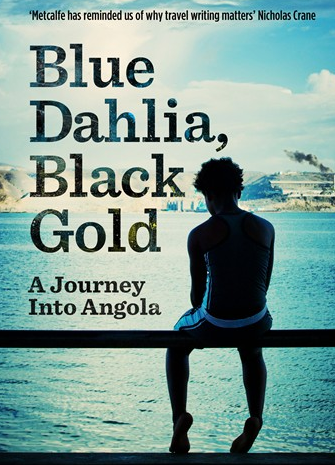 Daniel Metcalfe’s Blue Dahlia, Black Gold imaginatively captures the unfulfilled desires and brute realities of Angola suggested in its title. It is a welcome addition to a growing journalistic and travel literature on the country. Weaving through various cities, personalities, and sites, Metcalfe provides the reader with a comprehensive introduction to Angolan history and many of the contemporary political challenges of the country.

For those who are looking for a more classical travel account replete with thick ethnographic descriptions of landscapes and “˜exotic’ peoples this is probably not the book for you. However, for those interested in a contemporary Africa peopled by Angolans (rich and poor), Congolese traders, expats fleeing the Eurozone crisis, NGO workers, Chinese migrants, South African businessmen, and the ever present police, this book will be one they will want to pick up.

The account opens not in Angola but in the Hispanic and Luso-Brazilian Library in London where Metcalfe begins his journey into Angola’s history and culture. Commencing his narrative in London is fitting as the author constantly situates Angola in relation to its international linkages; from the slave trade to the contemporary effects of the global oil economy. The first character we are introduced to embodies these connections: Rui, an Angolan living abroad, yearns for the days of kizomba[1], late night house parties, and mais velhos[2] – complaining of the rampant greed of the oil economy that has corrupted the population from top to bottom. In Rui we first see the on-going ambiguities that many Angolans have in the way they relate to their country. Hoping to understand these contradictions, Metcalfe embarks on his travels.

His first stop, and perhaps the section which is in most danger of falling into the clichés of tropical jungles and friendly locals (other than the politicians), are Chapters 1 and 2 on Sí£o Tomé and Principe. Most likely Metcalfe’s very short stay on the islands prevented the more comprehensive treatment and sensitivity that Angola receives. Nevertheless, the reader does get a basic sense of the islands’ histories, the political tensions between Sí£o Tomé and Principe, and the effects of colonialism and the legacies of plantation economies on the islands.

Strategically, a stop there makes even more sense given Angola’s dominant role in Gulf of Guinea politics, and the oft heard Luandan joke that Sí£o Tomé and Principe are Angola’s nineteenth province.  The book then moves us through fast-growing Luanda (Chapters 3, 4, and 8), coastal Benguela and Lobito (Chapter 5), Huambo (Chapter 6), Cuito Canavale (Chapter 7), Malanje (Chapter 8) diamond rich Saurimo (Chapter 9 and 10), and Mbanza-Kongo’s extensive history of colonial encounters (Chapter 11). The final chapter on the oil-rich cities of Soyo and Cabinda is also particularly interesting. It provides a brief spotlight into Cabindans’ interpretations of the oil economy that surrounds them, and how the government’s national reconstruction programme has become mobilised as a propaganda tool.

For those who have little knowledge of the country, or even for the better acquainted, Metcalfe’s narrative provides a comprehensive overview of many of the key moments of Angola’s past and present.  Each town acts as an entryway into a different facet of Angolan history and politics, from the origins of the Kimbanguist church in the early 20th century, to the contemporary repression of government critics. Metcalfe sensitively links history, politics, and the country’s current predicaments throughout the book. Although these narratives sometimes overpower the ethnographic observations of the sites in which Metcalfe finds himself, the insight they provide into Angola should hopefully compensate for this for most readers.

Metcalfe also investigates expat culture in Luanda, explores the challenges of demining, and engages with the question of the position of customary authorities, in a somewhat satirical manner, through his audiences with BaKongo rulers and the Lunda-Chokwe king and queen. These more planned destinations are broken by informal conversations with Angolans, giving small flashes into ordinary life in the country.

While the contemporary story of rural Angola obviously also needs to be told, it is refreshing to find a travel writer engaging with urban areas, rather then bemoaning the fall of an idealised rural Africa. Moreover, it is a relief to observe Metcalfe’s realisation that rather than a pit of crime, as his first contact in Luanda portrays it, the capital is a city just like many others; filled with people trying to make their way in life whether by hawking, working for Sonangol[3], or terrifying Metcalfe in his regular candongeiro (minibus taxi) rides. As he walks the city he comes to realise that it holds a “powerful charm that is imperceptible at first site” as colonial constructions are juxtaposed with glass high-rises, zungeiras (ambulant traders) cross paths with oil executives. Metcalfe effectively sketches the horrors of urban inequality, as well as the bursting life that characterises Luanda.

One particular issue that should have been given more attention is life in Angola’s musseques (slums or informal areas). Although constantly referenced, and despite him even overnighting at least once in a musseque area, life in these zones remains underexplored in his narrative which focuses more on the formal areas of the cities he visits. His accounts of musseque areas tend to fall into the more problematic narratives of dirt, environmental degradation and poverty.

Given that the majority of Angola’s urban population (and therefore possibly the majority of its population if some statistics are to be believed) live in these areas, the oversight of the musseques, except as part of a more general landscape through which he passes on buses, seems a large one. Although he does provide some glimpses into life and politics in them via interviews with one of Angola’s leading hip-hop artists MC-K and through various Angolans’ comments about inequality and dissatisfaction with the current regime, a more vivid portrayal of everyday life in the musseques is missing.

Despite this gap in his narrative, Blue Dahlia, Black Gold is one of the most accessible introductions to Angola available. Even those with existing knowledge of the country will find it an enriching and enjoyable read.  It is definitely required reading for a first time visitor, from the confused researcher to the pampered oil worker. Providing an informed account of Angolan politics, underpinned by a rich historical narrative, and insightful conversations with key civil society leaders to fellow bus passengers, Metcalfe does what many academic accounts fail to do: he draws the reader in to a comprehensive world which reveals Angola to be a country that offers more to the visitor, and the imagination, than the dire accounts usually present.

Claudia Gastrow is a PhD Candidate in Anthropology at the University of Chicago. Her dissertation entitled “Negotiated Settlements: Housing, Citizenship, and Democracy in Post-Conflict Luanda, Angola” explores the effects of housing demolition and post-conflict urban policies on citizen-state relationships in contemporary Luanda.

[1] An Angolan dance and musical style.

The UK  requires Nigerians to take an English test to study or immigrate there. Critics say it must be cancelled or at least reformed.  Growing up in Nigeria, Anita Eboigbe* ...
By continuing to browse the site you are agreeing to our use of cookies.