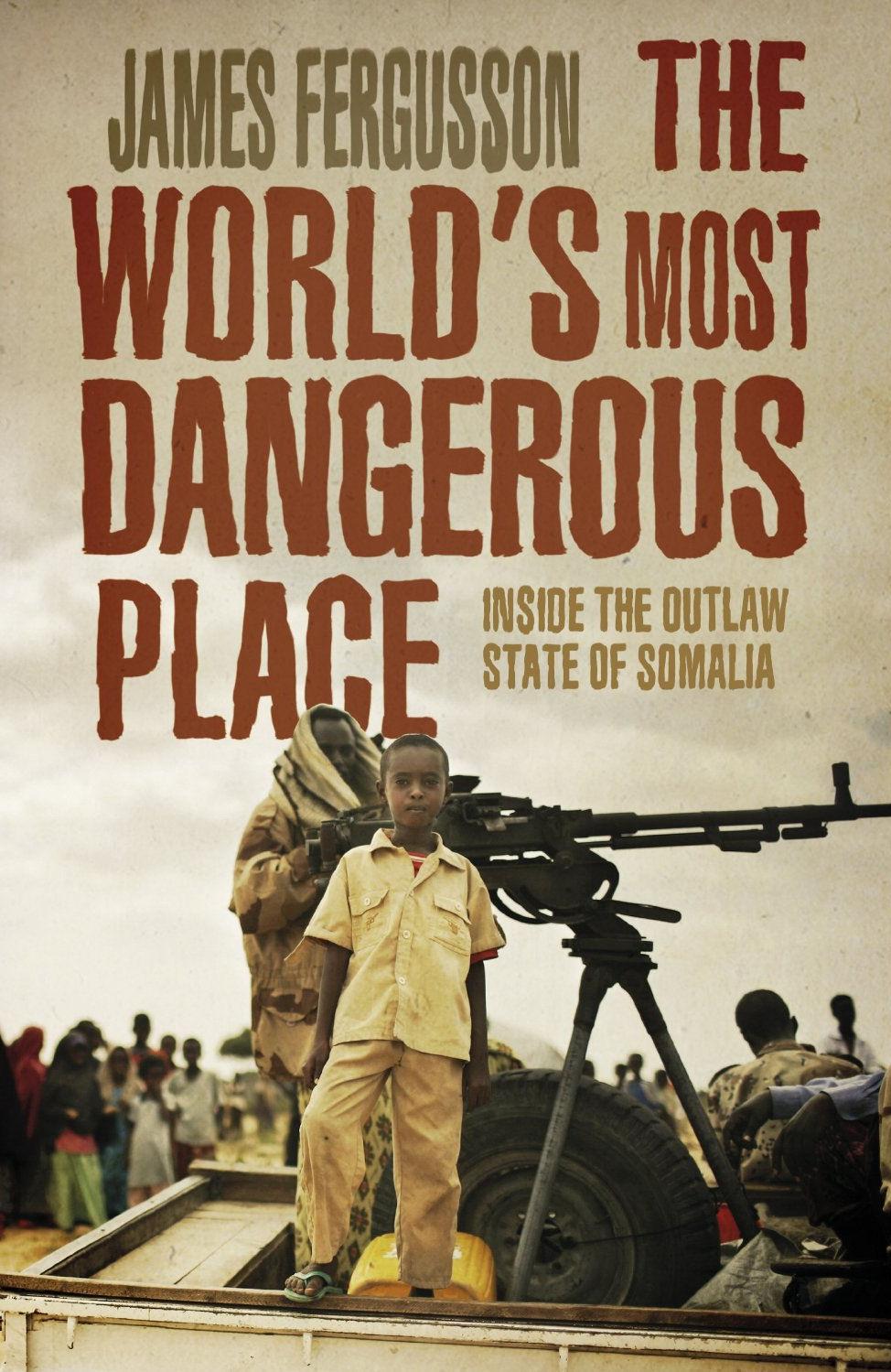 James Fergusson’s “˜The World’s Most Dangerous Place: inside the outlaw state of Somalia‘ is a good book with a bad title – lending itself too much to the kind of one dimensional Dantean portrayal of the country which the author has most definitely not produced. However, I can forgive the publisher for this attempt to reach a wider audience than the usual band of analysts, aid workers and academics who hoover-up Somali-focused fare.

This is also easily the most enjoyable non-fiction book on Somalia I have come across. In fact, it may be the only read-it-for-pleasure book on Somalia I know of. The country is, afterall, a place that generally spawns academic tomes which attempt to explain the complexity of state collapse eg Stig Hansen’s “˜Al Shabaab in Somalia‘ or revisionist histories which pointedly try to “˜problematise’ headline views of the country showing it as nothing more than a haven for warlords, pirates and Al Qaeda eg Mary Harper’s “˜Getting Somalia Wrong’.

Fergusson, through exhaustive research and a flair for a certain sharp-eyed journalistic reportage, demonstrates that whilst warlords, pirates and terrorists all inhabit the country, they are part of a much bigger (and more creative) economy of warfare that has developed over the last 20 years.

The book starts in Mogadishu with the Ugandan and Burundian soldiers of AMISOM fighting what Fergusson terms “a forgotten campaign in the Global War on Terror” against Al Shabaab (now pushed out of the city). Back in 2011, however, AMISOM was engaging in “a giant game of whack-a-mole” against the insurgents. Mogadishu had become, in Fergusson’s words, “an African Stalingrad”, with house-to-house fighting and a sophisticated network of supply trenches criss-crossing the city.

Fergusson also does well to include some description of the weird collection of western “˜security consultants’ and soldiers of fortune who collect in a place like this, following the action and the money. He reports that amongst them are 4 US military advisors to the then Transitional Federal Government (TFG) – the US “publicly distancing itself from the conflict whilst keeping a hand in the game.” And whilst many others may not be directly employed by the US, their cheques are certainly being signed by an international coalition of donors, making the dividing line between military assistance and proxy war vanishingly small.

In Mogadishu, Fergusson comments on the difficulty of actually finding Somalis to talk to for his research. But those he does pin down, and not just the interviews with the country’s political elite, demonstrate the human cost of a society where “at the level of the street, normality had been replaced by a kind of mad children’s crusade where chaos and sadism ruled. It was like Lord of the flies with automatic weapons.”

The author’s focus on youth, particularly that of Shabaab recruits, is particularly illuminating. He visits a group of young Al-Shabaab deserters now cared for by the government, and finds them “spirited, unruly and for the most part instantly likeable.” He raises the idea (from research by a French criminologist, Daniel LaDouceur) that Al Shabaab is “a super gang” and that current attempts to control violence through clan elders are ineffective because the elders “have lost control of their young men”.

Fergusson makes much play of the general incompetence and self-destructive disregard for the Somali population exhibited by Al-Shabaab. This is most clear in its attitude towards the 2011 famine – a product of both war and drought – which it refused to accept existed. This was, besides being profoundly immoral, a tactical error of judgment from its leaders who, in the face of this human disaster, were “faceless [and] pathetic.”

One of the limiting factors in Fergusson’s book is the difficulty of getting a truly national perspective on Somalia. For example, he was unable to travel south to Kismayo due to continuing insecurity in the country’s most important southern city, recently under occupation by Kenyan troops.

However, this means he does spend an extended period in “the court of King Farole” in Puntland – a more stable federal state squeezed between the self-declared independent Somaliland and the more volatile southern rump of the Somali Republic. Puntland may be a relative success story, but Fergusson still views it as something of a “˜Darodistan’ – “a mono-clan police state where bad things would, and sometimes did happen to people, with the wrong tribal affiliation.”

Puntland is better known in the wider world as the place where the pirates comes from. And Fergusson covers this topic in detail, even meeting a crew of recently released Burmese hostages, the leader of whom later stated that “we were so lucky to be Burmese from a shit poor country like our Burma” – the pirates realising that there was no real prospect of anyone paying a ransom for them. In this regard, Fergusson argues that the insurance industry, in readily paying out in hijack situations, “effectively colluded with the pirates’ mission of self-enrichment.”

In Puntland, the author interviews a Somali government spy (Guled) who had been tasked with infiltrating the pirate gangs. Whilst Fergusson is unafraid to display his distaste for Guled – “an ugly, feral, dangerous man” – he does provide him with the potential scoop (assuming it’s true) that Al Shabaab gets a $200,000 – $300,000 cut from each ship captured and kept at the port of Harardheere (purely a business relationship and not one of shared ideology).

As with his statements about Guled, Fergusson is not afraid to criticise Somali society, despite being an outsider. For example, the “continuing reluctance to raise women above the status of a chattel.” This is revealed in darkly humorous detail with a visit to the practice of Somali-Italian returnee Dr Giama, who shows Fergusson a slideshow of the medical consequences of a collapsed health system, including “a calcified ectopic pregnancy, a creature from the scariest science-fiction film” and a series of images the result of continuing “˜cultural adherence’ to the practice of Female Genital Mutilation. “It is remarkable what you can find under an abaya,” says the Doctor.

Logically, given the vast numbers of Somalis who have left the country in the last 20 years, Fergusson spends a decent section of the book considering the diaspora. For this he goes to both the US, where Minneapolis is, perhaps surprisingly, at the centre of the Somali community, and London. In Minneapolis he investigates the phenomenon of young Somali men and women being recruited to the movement back “˜home’, concluding that it’s a very “peer to peer process” probably with no real mastermind.

In London, the focus is more on how ordinary Somalis have integrated into British society and some of the challenges a generally poor and often traumatised population present to the mantra of British “˜multiculturalism’. The capacity of Somali gangs, through startling violence, to chase competing groups off their turf is commented on by a Special Branch officer, and a South London teacher says  that in her school “the behaviour of some of the Somalis is so impossible that the system just can’t hope…I’d have fewer of them in my school if I had a chance” – a disquieting, but credible, statement from one so close to the action.

Fergusson is entirely unsentimental about his extended experience in the international Somali milieu. He doesn’t falsely represent the positives in a country and society where clearly something has gone badly wrong. As for being “˜The Most Dangerous Place on Earth’, this really depends in which part of it you are standing – thinking of Somalia as much more than the cartographic expression of the failed post-colonial state is clearly something of a pointless exercise and we need to address each part of it on its own terms.