Injustice and indifference: Victoire Ingabire is sentenced to 15 years on appeal in Rwanda – By Kris Berwouts 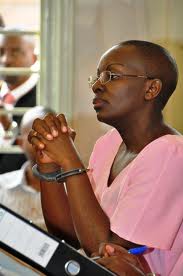 Victoire Ingabire at her trial earlier this year.

Whilst I am not normally very superstitious, I could hardly imagine a more appropriate day to wait for the verdict on Victoire Ingabire’s trial in appeal. It was first scheduled for May but it was postponed several times. Eventually, the judgment was announced on Friday, December 13th. I had just concluded  an exhausting journey through Congo and was preparing to take a plane back to Europe. Ingabire’s husband had promised to send me a text message from the Netherlands with the verdict. It was harsh: Victoire was condemned to 15 years in jail, almost twice her original sentence.

Victoire Ingabire lived with her “‹”‹family in the Netherlands since 1993 and became involved in Rwandan politics in the diaspora. Nearly seventeen years later, she returned to Rwanda as the presidential candidate of a broad political movement – the United Democratic Forces (FDU). She knew she wouldn’t win the elections of August 2010. She knew she would not be able to tear down “˜fortress Kagame’, built over a decade and a half, in one election. But she did, bravely, step into the ring: “At some point, someone will have to break the first brick in the wall. Let this be my contribution.”

As predicted, she did not win the elections. But neither did she lose them. She was prevented from standing as a candidate, thwarted by administrative harassment, a hate campaign in the press, physical intimidation and judicial proceedings. Two months after the election she was arrested . The trial started in September 2011 and continued until April 2012 . The verdict was announced on October 30, 2012 with Ingabire found guilty of terrorism, conspiracy in order to undermine the government and genocide denial. She was sentenced to a term of eight years – a few months ago I wrote a piece on African Arguments about her itinerary following her return to Rwanda.

Following her trial Ingabire’s case went to appeal. Ingabire believed that she was not guilty of any crime and wanted to be released and allowed to continue her political activities. The prosecutor, by contrast, thought eight years was not a sufficiently long sentence for the “˜crimes’ she had committed.

The appeal trial fell in a turbulent period for Central Africa. In the DRC, another new rebel movement, M23, had started its armed struggle. When it took Goma in November 2012 there was a real risk that a new war would break out between the countries in the region, including Rwanda.

Rwanda was soon accused of supporting M23. Even its most loyal bilateral partners took measures and suspended parts of their aid, or threatened to do so – including the Netherlands, Ingabire’s second home. Later in 2013, relations between Rwanda and the Netherlands (as was the case with the US, the UK, Germany and Sweden) were normalized. But the reaction to its involvement with M23 was much harder than Rwanda had expected. More than ever, the country felt and feels strictly monitored by allies that have previously been rather uncritical.

Ingabire’s appeal trial started in March 2013 and personally I did not think her struggle was lost. I had two indications that things could turn out in her favour. Firstly, it occurred to me that she was a lot less demonized in the Rwandan press than at the time of her return, her arrest and her first trial. Secondly, her family told me that she was well-supported by the Dutch Embassy in Kigali. This had not always been the case. I thought she might be part of a package deal where the Dutch restored their relations with Rwanda after seeing some signs of goodwill from Kigali.

Her friends and family in The Hague were also hoping for such a scenario. The court could for instance condemn her to five years (which would neutralize her politically, making it “‹”‹impossible for her to participate in elections). After three years in prison she could apply for a commutation of sentence. The verdict was, however, postponed.

The climate changed in September, after a spectacular action (for Rwanda) where a few dozen students handed a petition to the Prime Minister expressing their concern about the suppression of some study grants. This is something the Rwandan government is not used to dealing with and the activists were dispersed by the police. Forty students were arrested and kept for one night in prison before the  majority were released the next morning. Four, who were considered to be leaders of the action, were kept in prison and physically mistreated.

But not everyone was arrested – a few dozen students had managed to run away from the site. One of them was Flora Jenny Irakoze. Flora was the UDF representative who visited Victoire Ingabire several times a week in prison. It was through Flora that I was able to communicate with her. For a while, it looked like that Flora would remain under the radar of the police, but eventually one of the arrested students released her name under torture. An arrest warrant was issued against her. Since then, Flora has hidden herself and I have lost track of her movements. I can only hope that she is well.

After the students took action, the repression increased and our cautious optimism quickly faded. The verdict was postponed a few times more without any reason given – the last time being November 1st.

Ingabire’s first trial was much more political than juridical and there was little chance that the appeal would be any different. The text message from her husband on Friday 13th was brief: “15 years.” It was not a surprise, having seen how the climate had changed. However, what was a surprise was the very low coverage of Ingabire’s fate in the Dutch and other international press. I still haven’t made up my mind what I find worse, the injustice or the indifference.