From Mwanga to Museveni: Sex, Politics and Religion in Uganda – By Magnus Taylor 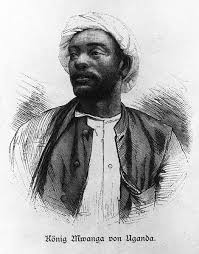 An artist’s impression of Mwanga II Kabaka of Buganda.

By far the most high-profile international story to come out of Uganda of late has been the passing of the anti-homosexuality bill. This has been covered both here and elsewhere extensively, so when I came to Uganda I made a conscious decision not to write about it – other people could do it with greater insight and expertise. However, over the weekend I visited the Uganda Martyrs shrine at Namugongo on the outskirts of Kampala – a Catholic memorial to thirty two members of Kabaka Mwanga’s court, put to death in 1886 for converting to Christianity under the influence of European missionaries. Twenty two of the Catholic martyrs were canonized in 1964 and the significance of their act to the international community of Catholics has been marked with visits by the pope in 1969 and 1993. However, the other side of the story is that the Martyrs were executed because they refused to have sex with the absolutist Kabaka Mwanga, an act of disobedience that could not be tolerated.

Largely for the above reason, the “˜Uganda Martyrs’ have gained some international attention recently and have been re-animated to take their place within the country’s contemporary debate on homosexuality. However, references to the martyrs in this debate, including that made by Richard Dowden on this blog, have simply stated that the men were put to death by Kabaka Mwanga because they refused to sleep with him. This explanation seems to run counter to the “˜official’ explanation of the Catholic Church, which sets them out as martyrs to their beliefs as Christians. It seems to me to be slightly more complicated that this – both explanations are true, but connected. The Uganda Martyrs refused to have sex with the Kabaka because they were Christians and persuaded of its sinfulness by newly-acquired learning from the bible. Such an interpretation raises some interesting questions (and problems) for those propounding the explanation that homosexuality is un-African and its origins are external to the continent.

Mwanga II was Kabaka for a relatively short period in the 1880s, during which time Europeans were beginning to exert influence on the Buganda kingdom. This came in the form of missionaries arriving during the rule of the more (in)famous Kabaka, Mutesa, who had welcomed them to the kingdom and invited them to carry out their work there. One result was a number of Christian converts within the large royal court. Mwanga saw this as a threat to his political control of Buganda and reacted violently to representatives of the new faith – a British missionary, Bishop Hannington, was captured and killed under the orders of Mwanga in 1885.

Mwanga also attempted to reverse the conversion of his kingdom and executed the Christian converts within the court either by beheading or burning. There is an account of the event, “˜Black Martyrs’, written by a British Catholic priest called J.P Thoonen, which quotes a Buganda man called Kiwanuka (see John Blevins’ “When Sodomy Leads to Martyrdom” for a more complete account.) This introduces the parallel, but associated, element of homosexuality into the story of the martyrs:  “At that time, the king practised the works of Sodom. Moslems and pagans were prepared to do those things with the king, but the Catholics absolutely refused. For that reason the king began to detest us, and deliberated with the pagans and Moslems about putting us to death, us the Catholics”. So, according to Thoonen, the martyrs refused to sleep with the probably bi-sexual Kabaka Mwanga because they were Christians, not because this kind of sexual practice was particularly unusual among the Baganda at the time.

Blevins actually looks through the contemporary source material and finds scant reference to this refusal to have sex with Mwanga as a reason for the executions, coming to the conclusion that whilst this element of the account is likely to be true, it was the European take on the events that elevated it in importance. Further evidence for the missionaries and their sponsors that Christianity, and with it “˜civilisation’, should be brought upon these people of the African interior.

The site of the martyrs’ execution, now in the outskirts of Kampala at Namugongo, has become an important place of pilgrimage for East Africa’s Catholic community. Every year the anniversary of the executions is marked on June 3rd as “˜Martyrs Day’ – a public holiday across Uganda. This has grown to become a gathering of more than a million Catholics, many coming from a far as neighbouring Kenya and Tanzania, and is probably the most important Christian pilgrimage in Africa. The explanation you get from the current tour guide at Namugongo is also interesting. Whilst the story of Mwanga being gay is not immediately volunteered, when asked about it our guide was happy to accept that this was probably true, but I got no sense that he thought this detracted from the fact that the men were Christian martyrs.

As mentioned, the story of the Ugandan Martyrs has gained resonance of late due to the passing of the anti-homosexuality bill and the international controversy surrounding its latent and illiberal homophobia. President Museveni, whilst never keen on the legislation, did not let this stop him using the story of the martyrs’ refusal to submit to Mwanga’s own sexual proclivities for his own political gain. The president and his cabinet, along with other dignitaries and, of course, influential members of the Catholic Church in Uganda, attend the main Catholic mass on Martyrs Day, celebrated in the grounds of the Namugongo shrine. During his 2010 speech at the event, Museveni stated: “The African Church is the only one that is still standing against homo-sexuality. The Europeans are finished. If we follow them, we shall end up in Sodom and Gomorrah… I hear there was homosexuality in Mwanga’s palace. This was not part of our culture. I hear he learnt it from the Arabs. But the martyrs refused these falsehoods and went for the truth, which is why we are honouring them today.”

Museveni’s explanation that Mwanga “˜learnt it [homosexuality] from the Arabs’ is a fairly popular one, but Blevins argues that it is unlikely that Mwanga “˜learnt it’ from Muslims because they had little influence on his court. This followed the execution of over 70 Muslim converts under Mwanga’s father, Mutesa, a decade earlier. Like Christianity, Islam was seen as a threat to Mwanga’s political control of his kingdom.

The episode of the Ugandan Martyrs actually shows that homosexuality, or at least the act of men having sex with other men, needed no external influence to exist in pre-colonial Buganda. But the politically motivated execution of the Christian converts continues to be used by this generation of Ugandan leaders to strengthen their role as guardians of Ugandan culture and with it their hold on national political power.