From trade to human rights, what will Trump’s policies towards Africa look like? Obama’s former US Assistant Secretary of State for African Affairs highlights some likely changes. 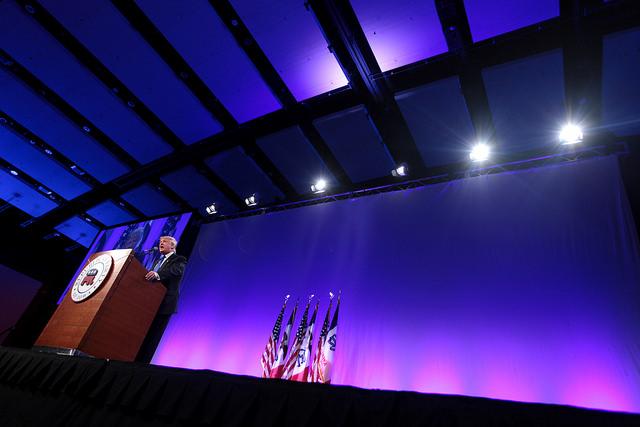 Africa doesn’t appear to be high up on Trump’s agenda, but it may still face a rocky ride under his administration. Credit: Gage Skidmore.

Africa is not likely to emerge as one of US President Donald Trump’s  foreign policy priorities. But the continent is almost certain to be affected by the fallout from his hardline foreign policy views, his strong anti-Muslim pronouncements, his vow to eliminate Islamic terrorism, and his “America First” economic policies.  And the prospects are probably bleak for any bold new development initiatives targeted at Africa like those rolled by his predecessors Bill Clinton, George W. Bush and Barack Obama.

Over the past two decades, US  Africa policy has enjoyed strong bipartisan congressional support from both Democrats and Republicans working together. But without a strong commitment to Africa in the White House or Executive Branch under Trump, the major programmes that have defined US policy in Africa for the past two decades will probably struggle to sustain the previous funding levels and state support.

Trump has exhibited no interest in Africa.  Nor have any of his closest White House advisors. Except for some campaign comments about Libya and Benghazi, the new president has made very few remarks about the continent. And despite his global network of hotel, golf and tourist holdings, he appears to have no investments or business relationships in sub-Saharan Africa.

The one member of Trump’s inner circle that may have an interest in Africa is Secretary of State Rex Tillerson. He has some experience of Africa because of his many years in the oil industry with ExxonMobil, most of whose successful dealings on the continent were with largely corrupt and authoritarian leaders.

If Tillerson appoints a moderate and experienced Africa expert to run the Africa Bureau – and there are a dozen Republicans who meet that definition – and if he is able to keep policy in the control of the State Department, African issues may not be pushed aside completely.  But irrespective of who manages Trump’s Africa policy, there will be a major change from recent previous administrations.

President Obama pushed a strong democratic agenda and launched half a dozen new development programmes including Power Africa, Feed the Future and the Global Health Initiative. Before him, Bush’s “compassionate” approach led to the establishment of the President’s Emergency Plan for AIDS Relief (PEPFAR) and the Millennium Challenge Corporation (MCC), two of America’s most widely-praised programmes on the continent.

But Trump’s world view is more myopic. He believes in “America First” and questions the value of the United Nations, NATO and the European Union. He is strongly opposed to nation-building and large overseas assistance programmes. He looks suspiciously at trade agreements. And he has railed against Muslims and other foreigners, while he has publically praised dictators and tyrants.

Under Trump, any focus on Africa will likely be on military and security issues, not democracy, good governance or human rights.  These policies are likely to find greater favour with Africa’s autocrats than civil society or local business leaders.

What can we expect in the different areas of US engagement?

We should expect an uptick in military and security cooperation with a number of African nations, especially those facing terrorist threats given Trump’s promise to wage an all-out war on Islamist militancy. The US role in the battle against al-Shabaab, Boko Haram and armed groups in the Sahel region will probably be expanded, and African support for US actions may become a new litmus test for closer relations.

We should probably expect a sharp drop off in White House support for democracy and governance programmes. Trump has denounced nation-building abroad and said during his inaugural address that he will “not seek to impose” America’s “way of life on anyone”.  His policies will almost certainly result in less spending on the promotion of political reforms, democracy and the conduct of free and fair elections in Africa.

The Obama administration routinely spoke out against torture, detention and extrajudicial killings, and pushed for greater gender equality and LGBTI rights. This will not happen under a Trump administration which has praised some authoritarian leaders, asserted the value of torture, and already curbed funding for women’s health programmes. The recent executive order excluding citizens from seven majority Muslim countries, including three in Africa, is an indication that respect for human rights and civil liberties will take a back seat to notions of security.

Trump’s “America First” stance will probably lead to the collapse of Obama’s major economic initiatives in Africa. Trade Africa, a regional effort to boost trade among five East African nations; Doing Business in the Africa, designed to encourage American businesses to trade with the continent; and the high-level US-Africa business summits Obama hosted are all in jeopardy. With Trump complaining about American companies moving jobs overseas and touting a new form of economic nationalism, dealing with Africa economically will not be a priority.

The strongly bipartisan African Growth and Opportunity Act (AGOA) has been the centrepiece of American trade policy in Africa, but its non-reciprocal concessionary treatment runs counter to Trump’s trade doctrine. Trump’s administration has focused on TPP (the Asia free trade deal) and NAFTA (the North American free trade agreement) so far, but at some point AGOA, which was recently renewed until 2025, will inevitably come to the attention of someone in the White House. Despite bipartisan support, the best hope for AGOA is that it will be allowed to remain in place with declining support until it expires. If there is an effort to reframe it, the US will probably demand African nations open their markets to American goods on a reciprocal basis.

One of Obama’s most successful programmes was the Young African Leaders Initiative (YALI), which brings several hundred young African professionals and entrepreneurs to the US for six weeks each summer. Although it has the potential to be as significant to Africa as the Fulbright Programme was to Europe, YALI could be an early casualty. YALI is not covered by any congressional legislation and is not funded beyond 2017. Previous Republican administrations have cut back exchange programmes and YALI has no natural constituency in the Trump administration.

Climate change is a major problem for Africa, but many in the Trump administration have denied or downplayed its importance, threatening to pull out of the 2015 Paris climate change agreement. UN and US studies have shown that Africa will be impacted by climate change more than any other region of the world and that African nations are the least prepared to deal with it. A shift on the global agreement will have damaging ripple effects across the continent.

Trump has said that rebuilding America’s deteriorating infrastructure would be one of his domestic priorities, and as he sets about this, USAID’s overseas programmes could become an easy target to be cut. Trump has already criticised them as wasteful and corrupt, and his administration might easily align itself with Republicans who fought to reduce development spending and eliminate the Export-Import Bank and the Overseas Private Investment Corporation – two organisations that have supported America’s trade, aid and development projects in Africa and around the world.

It is possible that Trump’s term in office will surprise us on Africa. Republican administrations have outperformed on this front before. President Bush certainly did, and his two landmark development  initiatives – PEPFAR and MCC – remain extremely popular.

But given the absence of any serious White House interest in Africa, Secretary Tillerson may become the key American player on Africa. He could put Africa policy on a solid footing by appointing an experienced Assistant Secretary of State for African Affairs; supporting key Bush- and Obama-era food, health and power development initiatives; and maintaining the business-focused policies of Obama. He could also throw his support behind USAID, the Overseas Private Investment Corporation and EXIM Bank, all of which strengthen US economic and development objectives in Africa.

Congressional leaders could also play an important role by maintaining their strong two-decade-long bipartisan support for Africa and encouraging the administration to prioritise and not to marginalise Africa.

But realistically, perhaps the most the continent can really hope for under Trump is “benign neglect”.

Johnnie Carson was US Assistant Secretary of State for African Affairs from 2009 to 2012. He is currently a Senior Advisor at the United States Institute of Peace and a Senior Fellow at the Jackson Institute at Yale University.