Beyond greed or grievance: understanding conflict in resource-rich states – By Christoph Vogel and Joschka Havenith 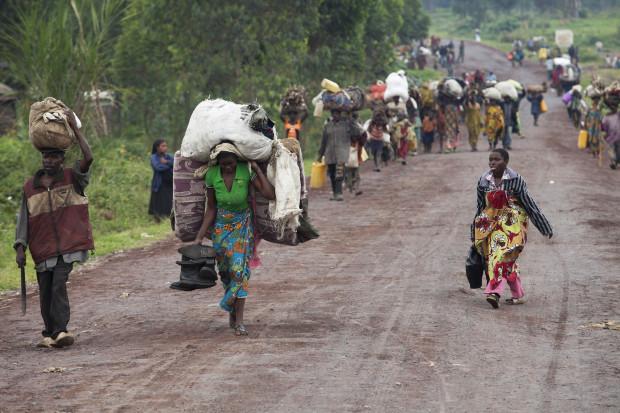 Diamonds and Rubber in Sierra Leone, oil in Angola and Sudan, tantalum and gold in the Democratic Republic of the Congo, copper in Zambia – the list of the natural resource wealth the Africa possesses is a long one. However, these riches have not always been a blessing for the continent. The development of African states is often said to be hindered by a “˜resource curse’ and, not surprisingly, most contemporary instances of armed contest over state power, authority, and legitimacy contain their fair share of a “˜natural-resources’ story.

Intra-state conflicts usually turn out to be a “˜mess’ of intertwined, related and opposing interests, strategies and actors. This has rarely been more obvious than in the ongoing conflict in the Central African Republic (CAR). What (officially) began in March 2013 as a coup to replace former President Franí§ois Bozizé and install Michel Djotodia in office has since transformed from an armed contest over state control to a full blown civil war displacing up to a million people and killing an untold number of civilians. That is not to say that greed motivated behaviour does not also play its part in this conflict – there have been reports about Séléka fighters trying to bring mining regions under their control.

Yet the mechanism that allowed this conflict to escalate seems to be a “˜classical’ security dilemma, which resulted in a spiral of violence and counter violence. Instrumentalised by powerbrokers, this grievance materialised along the line of religious division and identity in CAR, but corresponds with the most basic human need: security. The escalation witnessed in recent months is a result of the widespread violence the (officially disbanded) Séléka fighters inflicted on the mostly Christian population. The subsequent formation of the Anti-Balaka militias in reaction to the displacement, extortion and killing of the affected population was the spark that escalated the conflict to new heights.

With surprising speed, this conflict transformed its participants, thrust new ones on stage and discarded old ones, showing us again that one should be careful when choosing any single dominating paradigm in order to explain intra-state conflicts. However, the role resources sometimes (seem) to play, has led scholars, analysts, and commentators to jump on a bandwagon of economic explanations. The work of Oxford scholar Paul Collier became groundbreaking for this school of thought. Based on large-scale quantitative research, he argues that “˜greed’ bears more explanatory power than “˜grievance’ to understand the onset and duration of civil war.

Greed or grievance? Or both?

A closer look at underlying narratives and methodologies reveals serious flaws. To give but one example, the choice of proxy variables in order to frame the “˜greed’ paradigm is highly questionable: In a seminal analysis, Christopher Cramer of SOAS, for instance, revealed how the GINI coefficient (indicating inequality) will generally correlate with government defence spending and also the relative likelihood of armed conflict. Collier’s model is also far from an example of causally stable argumentation if you look at concrete case studies.

Notwithstanding the methodological weaknesses, the model made its way into mainstream policy-making. Nowadays, the assumption that ruthless rebel groups or predatory governments prey on natural wealth in order to feed their war effort – or the oppression of their population – informs actual proceedings in domestic as well as international politics.

But reality proves to be more complex than such a deterministic explanation. While greed may be an explanation in some cases, it is another challenge to identify the set of mixed or even contradictory motivations behind conflict actors’ behaviour in relation to resources. A “˜blood diamond’ (a secondary alluvial diamond) is often framed as the “˜rebel’s best friend’, since it is easy to exploit by untrained and poorly equipped (forced) labour. This has become common knowledge not only in parts of the scientific community but within international policy discourse. The Kimberley Process (KP) operates using the definition that “conflict diamonds means rough diamonds used by rebel movements or their allies to finance conflict aimed at undermining legitimate governments […].” Similar claims form the basis of more recent due diligence efforts in the field of tantalum, tin, and tungsten (the 3Ts).

The case of Zimbabwe’s diamonds

However credible the “˜blood diamond’ concept may be, it should be noted that governments have come to recognise the popular wisdom about conflict diamonds and often go to great lengths and apply considerable force to secure alluvial diamond fields. This might be one possible explanation why the Zimbabwean authorities moved into the Marange diamond fields so swiftly and brutally. In a nation that abounds with internal grievances, elites seem to perceive the existence of these diamond fields not only as an economic opportunity, but also as a political risk that has to be controlled, torturing and killing many of the local population and the non-local artisanal miners in the process.

The way both elites and the security apparatus act has not only caused suffering for the local population, but has led to the exacerbation of existing and new grievances. This might prove a lot more problematic in the long run for state and society cohesion. The Kimberly Process has, however, and with some controversy, approved Zimbabwe to export its diamonds. This shows one downside of “˜single-explanation’ reasoning based on quantitative analysis when we talk about the (cor)relation between resources, conflicts and rebel-centered explanations.

“˜Conflict minerals’ in the Congo

Eastern Congo shows another, interesting pattern of interaction between government, opposition groups, and civilian populations.  Mineral resources (in particular gold and the 3Ts) have played a key role in shaping conflict and economic life in the country’s eastern provinces. In contrast to usual narratives on so-called “˜conflict minerals’, the role of these minerals is much more ambiguous. While it is true that various actors within a myriad of about 50 non-state armed groups in eastern Congo prey on natural resource deposits, recent observations show that most of these groups carefully navigate their way through various income opportunities. Where mineral exploitation vanishes as a source of revenue, armed groups adapt by focusing on alternatives such as taxation or trade in other commodities such as palm oil or marijuana.

Government agents (army, police, or civilian administrations) in turn, are heavily implicated in resource exploitation. Increasingly, this happens within a fine-tuned civil-military interaction. While international campaigns regularly focus on the oppression of civilians in such arrangements, the latter maintain a great share of agency in the Congolese context. By creatively relying on social leverage, e.g. through the production of legitimacy and transformation of regulation on the basis of customary power schemes, civilian actors have in many parts of eastern Congo secured a strong influence on mineral exploitation.

Quantitative analysis in the shape of the “˜greed and grievance’ paradigm certainly has potential to inform our understanding of general tendencies and inspire more focused analyses on specific cases. However, it is not helpful in crafting a more nuanced understanding as to how natural resources and armed conflict relate. Hence, in order to design specific policy, broader quantitative studies always have to be supplemented by qualitative research that focuses on the case in question. Only if this condition is met will a true chance emerge to tailor appropriate policies in cases such as the CAR, Zimbabwe, eastern Congo, or other places that grapple with the complex problem of contests over state power and resource wealth.

Joschka Havenith is a researcher and consultant on governance and conflict in Sub-Saharan Africa. He lectures at the University of Cologne.

Christoph Vogel is a PhD researcher at University of Zurich. He blogs at www.christophvogel.net and tweets at www.twitter.com/ethuin.