In the CAR, Joseph Zindeko and the Seleka are here to stay – By Louisa Lombard 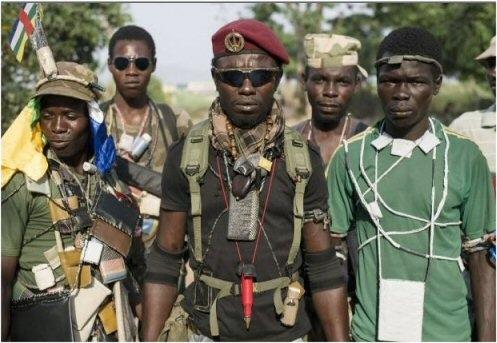 Joseph Zindeko, military commander of the Seleka in the CAR.

Years before he took up arms as a rebel, the new military chief of the Seleka rebel alliance, Joseph Zindeko, was shot in the knee (the bullet exited through his thigh – he showed me the scars) and in the stomach. Another time a bullet just grazed his behind his ear. He sustained these wounds while working as an armed anti-poaching patroller in his home region of northeastern CAR. That this former pisteur, as the anti-poaching guards are known, has risen to become head of Seleka points to fact that for all the talk of the Seleka’s “˜foreign’ composition, this loose alliance is also embedded in the conflicts that have been playing out in northeastern CAR over the past several decades, which frequently pit “˜poachers’ and herders against Central African wildlife guards in battles that are no less intense for the fact that they rarely draw the attention of the international humanitarian-diplomatic media audience.

From the moment Seleka arrived on the CAR political scene in December 2012 with a successful attack on the town of Ndele, the fighters’ origins have been highly contested. From the perspective of the anti-Balaka militias that, among other reasons, arose to protest the Seleka abuses, Seleka fighters are all foreign mercenaries from Chad and Sudan. And indeed, Michel Djotodia, Seleka and CAR’s erstwhile president, had recruited from among the men-in-arms of the Chad/Darfur borderlands when planning his successful assault. The most clearly “˜Central African’ elements of Seleka, like Zindeko’s Union des forces democratiques pour le rassemblement (UFDR), a rebel group that emerged in 2006 and signed a peace agreement with the CAR government in 2008 (but never received the disarmament assistance they had expected), joined only after the Ndele attack, when Seleka’s strength became apparent. It was thus easy for some observers to write off these Central African elements as hangers-on to processes that were really being managed by the region’s heads of state and political-military entrepreneurs.

But now, a bit more than a year – and a whole lot of war – later, Zindeko and his men are back, and a look at the origins of some of the UFDR officers is overdue.

Who is Joseph Zindeko?

Zindeko got his start working as a pisteur for a European Union-funded conservation project in northeastern CAR. He was trained by the American and European “˜technical assistants’ who came through from year to year to teach the guards about the flora and fauna and also battle and ambush tactics for their patrols over CAR’s Portugal-size northeastern parklands. When the project’s funding ended, in 2004, he joined a select group of guards funded by a safari hunter wildlife charity and trained and led by two Russian former French Foreign Legionnaires. The Russians, Zindeko said, were “very effective.”

During those years, Zindeko was known as “˜Marconi’, but he wasn’t entirely sure why – the Russians chose nicknames for all their men, and they intended them humorously. A mild-mannered older man was dubbed “˜Zidane’, for instance, after Zinedine. Anti-poaching was tough work, but Zindeko did it because it meant a regular salary. The Russians even gave their pisteurs bonuses for their families. “I can’t just stay in the fields,” he told me, shrugging, as we chatted in his hometown, Tiringoulou, in late 2009.

Zindeko left anti-poaching around 2006. Chadian men-in-arms (whether hostile or friendly to the government is somewhat unclear) had used the airstrip at Tiringoulou to offload military equipment and then disappeared to the north. When people in Tiringoulou alerted the government in Bangui to the disturbance, Presidential Guard soldiers made a rare appearance there, attacking and burning towns and villages. People fled into the bush, and some of the men began organizing the military nucleus of the UFDR. Even those who had not been involved in anti-poaching work knew violent, conservation-related conflict firsthand.

In 2002, Tiringoulou’s visionary leader, Yaya Ramadan, had been killed while out on free-lance anti-poaching patrols with a group of Tiringoulou youth he had organized for that purpose. They had been receiving some logistical support from the EU conservation projects but operated independently. Tiringoulou residents understood the aggressors to be Hemat/Ta’isha herders, and a series of back-and-forth raids began between Tiringoulans and those rallied to their side and the herders. From the herders’ perspective, Ramadan had started it: his group had been killing herders and other parkland interlopers, despite the fact that they had negotiated protected-area access from other leaders in the zone. From the Tiringoulans’ perspective, the herders had started it. They were in CAR’s parklands illegally and Ramadan had only been enforcing the law. Hundreds of people were killed between 2002 and 2005, when the battles finally died down.

I last saw Zindeko in Tiringoulou in March 2010. He was frustrated by the government’s failure to make good on its promises of disarmament, demobilization, and reintegration (DDR). But he remained outwardly sanguine. His men were waiting peacefully. “It is international opinion that will judge us,” he said repeatedly. A few days earlier, Tiringoulou, a sleepy town of two or three thousand, had been rocked by a major crime. A traveler had stolen the penises of two of the town’s residents. Zindeko had been the one to ensure that due process was followed in the treatment of the alleged thief. Otherwise, he said, women would have ripped the man limb from limb. Zindeko said he brought the man to the UFDR-run gendarmerie post, where he was to await a UFDR trial. But he had mysteriously escaped. Zindeko left me to surmise that dark arts had been involved in his disappearance. Others in town were sure the alleged thief had been executed, by none other than Zindeko himself.

Zindeko saw himself as Central African. His main source of employment – armed conservation – had the objective of securing the country’s borders from herders and poachers who were part of networks that stretch into Chad and Sudan. Of course, as was the case with Ramadan, people in the area turned those ostensibly nationalist projects toward their own ends as well. But when it came time for some of the pisteurs to be integrated into the government wildlife forces, back in the mid-2000s, not a single person from Zindeko’s home Vakaga prefecture was picked. And that promised DDR never happened.

Now, given the brutal – and ongoing – killings over the past year, such grievances seem mild. What Zindeko’s leadership will mean for the future of Seleka, and CAR, remains to be seen. But perhaps now there will no longer be any excuses for failure to take him and other dispossessed rural Central Africans and the conflicts they’re enmeshed in seriously. As powerful as president-makers in Ndjamena and Paris might be, Zindeko, too, is here to stay.