Will MINUSCA deployment make a difference in CAR? – By Louisa Waugh 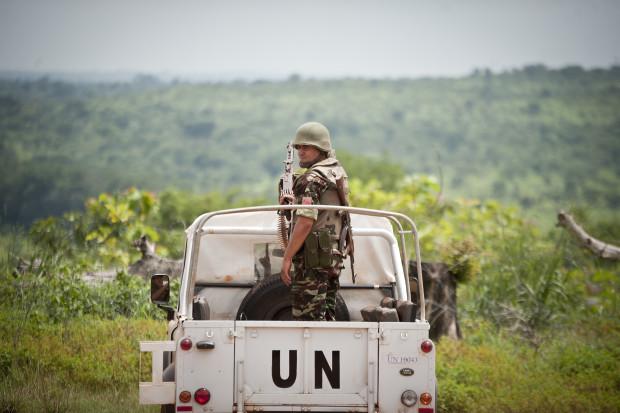 Its medals gleaming under the baking Bangui sunshine, the African Union International Support Mission to the Central African Republic (MISCA) has just said its official au revoir to CAR, as the new UN mission takes over the national security mandate. On Saturday 13 September, almost nine months to the day since MISCA was launched with 6,000 troops from seven regional African nations, its closing ceremony was a military parade attended by national bigwigs, a handful of international VIPs, and CAR President Catherine Samba-Panza. It was also the warm-up to Monday’s launch of the UN MINUSCA mission, which marks the official deployment of UN peacekeepers in CAR.

MINUSCA (the United Nations Multidimensional Integrated Stabilization Mission in the Central African Republic) is scheduled to be at full capacity of 12,000 peacekeepers by February 2015. This, it’s worth reiterating, will be the eighth peacekeeping mission to be deployed in CAR since 1979 (including short-term bridging missions, like the 850 EUFOR troops currently patrolling Bangui’s Muslim quarters). This single fact exposes the abject failure of previous peacekeeping missions to stabilize, or harmonize, this economically crippled and ethnically diverse landlocked country of just 5 million people. Will MINUSCA be any different?

The physical make-up of these “˜new’ UN Casque Bleu peacekeepers is an initial indicator that whilst MISCA no longer officially exists, in other ways it lives on. Almost all the resident MISCA troops (with the noted exception of those from Equatorial Guinea who apparently lack the requisite training) will simply change helmets, and immediately be absorbed into the new UN mission.

MISCA however, has not been popular in CAR, and Governments of some of the contributing African countries face allegations that their troops have seriously abused their powers, including raping Central African women, and girls. These pitifully familiar stories of peacekeepers and rampant sexual abuse have eroded what little confidence remained between MISCA troops and Central Africans, who are collectively exhausted by the chronic lack of security, justice and above all, peace.

Meanwhile, the French Sangaris and the EUFOR troops (whose governments on the UN Security Council agreed to Samba-Panza’s request for a peacekeeping mission) will now exit by stealth, and will probably be completely out of CAR by early next year – leaving MINUSCA to try and succeed where other peacekeeping mission have failed the people of this country.

MINUSCA is being headed up by a decorated Senegalese General, Babcar Gaye, known for his forceful personality, and has a lavish budget of $253 million for the first 6 months of the mission. Seasoned UK diplomat Diane Corner is the mission deputy, and this is her first UN posting.

Alongside peacekeeping activities in CAR MINUSCA will also be setting up bases and sub-offices across the country to expedite its main political mission; the follow-up to the controversial Brazzaville Accords signed by the CAR transition Government, and representatives of ex-Seleka and anti-Balaka, in Congo-Brazzaville on 23 July. The accords are an agreement to cease all armed hostilities, but have already been repeatedly violated by both Seleka and anti-Balaka, particularly outside of Bangui where civilians are still being killed almost daily, amidst vicious power struggles within both armed movements.

MINUSCA faces two serious challenges to its political mission: getting ex-Seleka and anti-Balaka to begin adherence to the Accords will be complex and demanding, as representatives of both movements were invited into the Brazzaville process before agreeing to disarm or cease hostilities, and ex-Seleka representatives were subsequently rewarded with political positions within the CAR Transition Government.

In addition, the Accords were signed outside CAR, and the Central African people, especially those beyond Bangui who continue to bear the brunt of the on-going political violence, were barely informed, never mind consulted about the process. This provoked many national NGOs and civil society activists to reject the legitimacy of the Accords. The relative calm in Bangui is a world away from communities in small cities like Boda in Western CAR, where the Muslim community is still encircled by armed groups threatening extreme violence.

MINUSCA is envisaging a nation-wide political consultation process that will work from the bottom up, with dialogues being held in situ with communities across the country. The aim is to monitor responses to the Accords, and to collate local and regional recommendations that can be fed into the National Forum charged with following the Accords. It is a laudable vision, and could make a difference, if the painstaking security logistics can be resolved. Central African communities most affected by the current violence may then feel invested in this political process, especially if this dialogue is on-going, and involves some level of genuine transparency by the CAR Government and the UN to the national population.

MINUSCA is, under a tranche of Urgent Temporary Measures, also setting up special courts to deal with the mass of violations that have occurred since March 2013, when Seleka seized power. If these can be sustained, and operate in accordance with new laws currently being drafted, they will contribute towards a national sense of justice, and a tangible challenge to widespread impunity. But as Joseph Bindoumi, President of the Central African League for Human Rights, recently told me, “Right now in our country, we have no peace to keep.”

The MISCA flag has been lowered, and Central Africans have welcomed the new peacekeepers with open arms. They have high expectations of MINUSCA and the peacekeepers, who will undoubtedly stay here far longer than their initial one year mandate. The questions is whether MINUSCA has the courage and vision to actively involve communities, including civil society actors, in long-term peace and justice building, thereby proving this mission can be the exception to the recent, lamentable history of peacekeeping in the Central African Republic.

Louisa Waugh is CAR Project Manager for Conciliation Resources, and based in Bangui.