Perpetual Conflict: why discord between the Somali President and prime minister continues – By Hassan M. Abukar 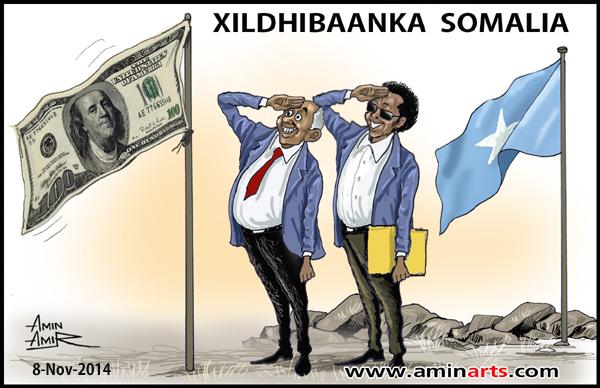 The recent conflict between President Hassan S. Mohamoud and Prime Minister Abdiweli Ahmed has caused a gridlock in the Somali government’s operations. The prime minister did a limited and pointed reshuffle, which involved only two cabinet ministers. The problem with this new change was that it involved two close friends and allies of the president. The president, sensing a declaration of war by the premier, issued a decree rescinding the reshuffle. Some politicians and the UN Special Representative to Somalia, Nicolas Kay, have made many attempts to mediate in the conflict between the president and the prime minister, but to no avail.

The Somali Parliament convened twice after more than 100 legislators attempted to introduce a motion of no confidence in the prime minister. Supporters of the PM interrupted these sessions and they were adjourned. Interestingly, Nicholas Kay recently warned Somali legislators against accepting bribes to vote Prime Minister Ahmed out of office, an admonishment that enraged some parliamentarians but was well-received by others for its frankness on the level of malfeasance in Somali politics.

Is the conflict between the president and the Prime Minister due to ambiguities in the provisional constitution?

While the provisional constitution needs some heavy-duty amendments, it is not the main reason why the country’s two top leaders are at loggerheads. Furthermore, the constitution states that the prime minister has the power to “appoint and dismiss members of the Council of Ministers.” The president, in essence, has no business interfering with how the PM runs the council of ministers (as long the premier does not violate the constitution).

This endemic conflict between the president and the prime minister is nothing new. The last four presidents of the country (going back to 2004) have had major problems with their prime ministers. Ironically, with the exception of President Abdullahi Yusuf, each president had three prime ministers in their respective single terms. President Yusuf’s term was unique because he had no control over Mogadishu for more than half of his term – his government was initially based in Nairobi and later the Somali towns of Jowhar and Baidoa respectively.

Of the 10 prime ministers the country has had since 2000, only two were not dismissed (Mohamed Abdi Yusuf and Abdiweli Gaas). Oddly, these two left office after a year because the tenure of their respective governments ended. However, the relationship, for instance, between Gaas and President Shaikh Sharif in the final several months of their term was marred by dysfunction, political competition, and mistrust.

The average Somali prime minister stays in office about 1.3 years. The only one who stayed three years in office was Mohamed Ali Ghedi, under President Yusuf.  President Yusuf’s other premier, Nur Hassan Hussein “Nur Adde,” lasted 2.3 years, a tenure so acrimonious that it led to the president’s eventual retirement.

Six prime ministers stayed in office an average of 1.1 years, and one (Mohamed Farmajo) only about seven months. Hassan Abshir and Nur Adde were the only ones who stayed two and 2.3 years respectively.

Interestingly, all these prime ministers universally complained about the head of the state trampling on the constitution and, hence, acting as imperial president. The presidents, in turn, questioned the prime ministers’ intransigence and tendency to act on their own. Many times, the sitting parliament became a tool for the sitting president.

The conflicts between Somali presidents and their premiers cannot be attributed simply to ambiguities in the constitution or a clash of personalities. The causes lie deeper than that and can be partially explained by the following:

The conflicts between Somali presidents and their prime ministers are unlikely to end until there are viable and effective branches of the government, such as the legislature and the judiciary which can serve as check and balance for the executive branch. Otherwise, there is nothing much a new prime minister can do. Last year, shortly before the selection of the current prime minister, Professor Afyare Abdi Elmi astutely tweeted.  “I do not know who the next PM of Somalia will be, but I am not sure what he can really do””we need to think of a long-term solution.”

That is unlikely to happen before 2016.

Hassan M. Abukar is a political analyst and can be reached at [email protected] .