Citizens of Africa Arise! You have nothing to lose but your chains, says Oby Ezekwesili – By Richard Dowden 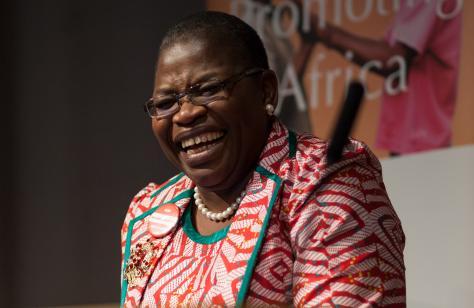 It is not often you hear a Vice President of the World Bank calling for revolution, but Oby Ezekweseli did just that at the Royal African Society’s Annual Lecture last week.

There is an unwritten rule among politicians globally that they do not rubbish their rulers when they are abroad, but Oby – who would not describe herself as a politician – did not hold back.

We should have guessed how fired up she was when the former minister in President Obasanjo’s government in Nigeria and World Bank Vice President set the title:  “Africa Rising? What will happen when her citizens arise?” You can watch her presentation here

She traced the lack of participation by the vast majority of Africans in their own development over the past 50 years which has left 70 – 80% of them absolutely poor. She blamed the “parasitic” African elites, not just for looting their countries, but for preventing any of the benefits of economic growth reaching their people. Her own country, Nigeria, is very rich but has some of the worst human development figures in the world.

She also pointed out that external actors, the aid donors, the World Bank and the IMF who drove the structural adjustment economic reforms of the 1990s and 2000s and left African citizens with no part to play in making the national choices for development. These reforms were necessary, she said, but “externals cannot give development to any country or any people… The ownership of the process by African citizens has been the missing link.”

Dismissing the current crop of African rulers, she expressed her pride in the people of Burkina Faso for the uprising that ejected President Blaise Compaoré

, who ruled there for 27 years. The leaders “absolutely don’t care” about their own citizens, she said, but spend their time among the global elite “all of whom have each other’s’ phone numbers”.

The next stage of development, said Oby, can only be done with the participation of the people, “no external force can do that…The change you have been waiting for will not come from the elite class waking up and having an epiphany. The change has to be made by the people. They are the only ones who can.”

And she urged the African diaspora to return to Africa and lead the struggle, a remark that created a moment of awkwardness in the room I noticed.

But I am sure you will agree this was an inspiring, energising message: People of Africa, you are citizens, not slaves. Rise up and demand what is yours and remove the people who have stolen it from you. Could the removal of Compaoré

by mass demonstrations followed by the refusal to accept an interim military ruler be the beginning of an Africa-wide trend as a 21st Century generation comes of age? It is not the usual message that you hear from African ministers or the World Bank.

But there is an anomaly here. If Oby is right then the most democratic countries with the most widespread political participation would be the most prosperous. And the most equal in terms of sharing the national cake. But this is not so.

Put aside the oil and mineral-rich countries in Africa, and, as Oby pointed out, you find that the fastest growers are those with stability and strong institutions such as effective ministries that deliver health and education to their people. In turn these attract aid and investment. These countries are Rwanda, Ethiopia, Uganda, Mozambique and Tanzania.

But what else do they have in common? Ethiopia and Rwanda are top-down dictatorships ruled by parties that fought their way to power and have ruled since 1991 and 1994 respectively. They deliver health and education to their people but they do not allow freedom of speech or association. Their media are tightly controlled. Uganda is a less powerful dictatorship but President Yoweri Museveni also came to power through the barrel of a gun in 1986 and his army has controlled the country ever since. The ‘Walk to Work’ mass movement in 2011, which complained about lack of services and high prices, was brutally suppressed.

Museveni was forced by aid donors to open up politics and he now has to put up with a rumbustious parliament and a moderately free press. A grumpy population, especially in the capital, might vote for someone else if they were sure that someone was allowed to run in a fair election. That is unlikely. At election times the state, including the police and the army, is an extension of the ruling party.

Mozambique and Tanzania are still run by the parties that led those countries at independence. Both will soon become exceedingly rich because of oil and gas; God-given resources that are profoundly anti-democratic. Oil-rich countries do not need to raise taxes from their people, they mainline millions from oil companies straight into the treasury. So whoever is in power when those revenues begin to flow may stay there for decades. There is still some democratic space in these countries and there are real national debates with opposition parties in both of them, although it is unlikely that an opposition party could win without provoking violent reactions from the ruling parties.

So is benign dictatorship the best Africans can hope for? There are certain advantages – stability and consistency. The downside is that it is dangerous to think or speak out so there is no national debate. Meanwhile new generations emerge – especially in Africa where birth rates are high – and dictators become out of touch. If the new generation follow Oby Ezekwesili’s call, Africa will remain exceedingly interesting and exciting and should also become prosperous and powerful.

Piracy in Nigeria: just getting going? – ...