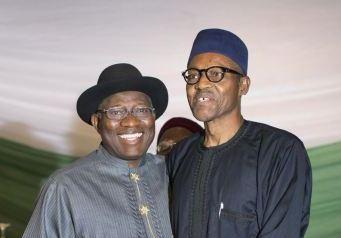 Out with the old and in with the new. Jonathan hands over to Buhari.

Two contrasting scenes reveal the aspirations and challenges Nigerians currently encounter. At the presidential inauguration crowds cheer as the former president, Goodluck Jonathan and the new office-holder, Muhammadu Buhari shake hands after the formal handover of power. Shouts of “change” resonate as the euphoria builds. As Buhari gives his inaugural speech, loud applause greets every promise that he makes.

The night before, just across the street from Nigeria’s premier luxury hotel, the Transcorp Hilton in Abuja, long queues at a petrol station, and in clear view of international dignitaries staying at the hotel, tell a potent tale of some of the challenges that await the incoming government.

Regardless of these challenges, Nigerians celebrate a unique episode in the country’s history. The new ruling party, the All Progressives Congress (APC), has made its mark as the first opposition party in the country’s history to take over power from a ruling party. In his speech after the announcement of the Presidential results, Muhammadu Buhari made a comment that many Nigerians would agree with. His words: “This is not the first time you’ve cast your vote but this is the first time your vote has been counted.” No matter how one chooses to rationalise this achievement, most Nigerians see it as a good omen.

Many observers predicted a slim victory for the former ruling party, the People’s Democratic Party (PDP) but the general mood across the country betrayed the feeling of dissatisfaction with the Jonathan government. The margin of the APC’s victory was very revealing of this sentiment.

After sixteen years at the helm, the PDP finally saw its political structures crumble like a pack of cards all over the country, except in the oil producing south and in the south east (its traditional strongholds). If the presidential elections struck the first blow, the gubernatorial and state legislative elections dealt the graveyard punch.

Buhari’s victory raises many questions about the conduct and outcome of previous elections, and also draws attention to some key flaws in the electoral process that appear not to have been addressed yet. Apart from the obvious logistical challenges that have impeded the smooth conduct of elections, the outcome of the recent exercise reveals the intricate regional political balance that has to be struck to win a Presidential election in Nigeria (assuming elections are reasonably free and fair).

The final election results revealed regional voting patterns. However, it would be prejudicial to assume that Buhari’s victory was dependent on the support he got from his northern constituency alone. For the first time Buhari ran under a national platform. The merger of five political parties, including some members of the perceptibly regional All Progressives Grand Alliance (APGA) -considered the party of the east – helped the APC make inroads into areas that were traditional PDP support bases, regional or ethnic imperatives notwithstanding.

This is the first time Nigeria’s core north and the southwest have built an incontrovertible alliance. Except for the aborted 1993 general elections, and a brief alliance in 1965 between the then ruling National People’s Congress (NPC) and the Nigeria National Development Party (NNDP), a splinter of the main opposition Action Group (AG) in the west, which sparked major violence between members of the NNDP and the AG, leading to Nigeria’s first military coup d’etat, the two regions have always been on opposite sides politically. Where they have voted on the same side, like in 1999, it has mostly been at the presidential elections. At the state elections they have usually toed regional party lines.

The PDP’s loss of two key states in the middle belt of the country, Plateau and Benue, to the APC, both at the presidential and gubernatorial elections, was a surprise. These two states had always been considered bedrocks of anti-Fulani/Hausa sentiments (Buhari is Fulani). Also, in the Deep South and south east, the APC made significant numbers in Edo state and won in Imo state. These victories were indications that the party machinery was able to surmount ethno-religious sentiments.

However, there were indicators that exposed the seeming ethno-religious lines along which elections have always been drawn in many parts of Africa; one of the reasons why “winner takes all” politics has been impossible in most states on the continent. The PDP’s victory was most significant in the south, where Jonathan hails from, and the southeast states; more a consequence of regional solidarity than anything else. If it had made significant numbers in the legislative elections in states beyond the south and south east the PDP would have had a chance of retaining a veneer of a national political movement, but the massive losses it recorded have seriously reduced its national relevance. As the party deals with its new role as an opposition, it must also contend with the fact that it is gradually tilting towards a new role as a regional party.

No more “˜business as usual’

These elections have clearly set the stage for a new Nigeria; one where people will feel confident enough to make demands on the government like never before. As one man puts it, “now we know we can vote in or out whoever we choose, our leaders will be on their toes from now on.” He is not wrong: already a plethora of demands have been made of Buhari and expectations are very high. Nigerians want to see immediate solutions to the nation’s electricity crisis and swift efforts at addressing other pressing issues such as corruption and a stagnant economy.

President Buhari’s initial actions already reveal his unwillingness to compromise on key issues and his promise of a transparent government. The character that seems to have inspired his popularity recently played out in his rejection, twice, of the list of ministerial nominees submitted to him by the state governors. One of the unique features of Nigeria’s democratic system is the power of state governors to impose ministerial candidates on the president. What this means is that the Nigerian President is saddled with a cabinet that is made up of cronies of state governors rather than those best suited for the roles. Buhari has insisted that he will not allow anyone to select his cabinet for him.

President Buhari and his vice, Professor Osinbajo, have also fulfilled one of their key campaign promises by declaring their assets – a step former president Jonathan evaded throughout his four year term.

By far the most impressive step so far that has resonated with the Nigerian public is President Buhari’s relocation of the Military command responsible for fighting the Boko Haram insurgency to the north eastern state of Borno, the hotbed of the conflict. There have been widespread debates about the effectiveness, or otherwise, of this decision but many consider the move a radical shift from what has been described as the lethargic approach of the previous government and the first sign of the sweeping reforms of the military that he promised.

The initiatives taken so far have been promising, but there are major challenges ahead that the Buhari government must be prepared to grapple with. Buhari has to quickly tackle pressing fuel crisis and crippling power cuts, with national electricity supply dropping from a high of over 4,000 to about 1300 megawatts. Nigeria’s economy is facing a severe crunch and the Naira is at an all-time low against the dollar, causing price hikes.

Another area where Buhari’s preference will be a crucial indicator of Nigeria’s democratic course is the selection of a new candidate to head the Independent National Electoral Commission (INEC). The widely-praised incumbent, Professor Attahiru Jega, must leave office on June 13th as his term expires.

Forget his celebrated statesmanship in congratulating Buhari as the results were announced, Goodluck Jonathan will be remembered as the president whose tenure saw the collapse of Nigeria’s once formidable ruling party, the PDP. Recently, efforts to make him chairman of the party’s Board of Trustees were strongly opposed by disgruntled members of the party who insisted that any leadership role for the ex-president would be detrimental to the PDP’s fortunes. Jonathan turned down the offer in the end.

Regardless of the serious losses it recorded, the PDP will be the most potent opposition to the ruling APC. It may have lost its command post but its relevance is not completely lost. With some political heavyweights still in its ranks the party has the potential to rebuild its old power base, but several key issues that clearly spoilt its chances of winning the general elections have to be addressed.

One of the biggest challenges for the PDP was the domineering control that the state governors had over the party executive, both at the state and national levels. Nigeria’s foremost “activist-Bishop”, Hassan Kukah’s assessment is lucid. He says that the PDP “became insensitive to the needs of its supporters and the party had no mechanism for internal cohesion and simply believed it was the elephant that could not be slain”. During the last elections the party imposed candidates over those who had emerged from the democratic choices of party members. The party witnessed serious internal conflicts because of this. Until it sheds this toga, the PDP may remain in opposition for a long time to come.