Events in Eritrea are often interpreted in terms of what they mean for the strength of the regime. But this lens can lead us to devalue ingenuity and change led by Eritreans themselves. 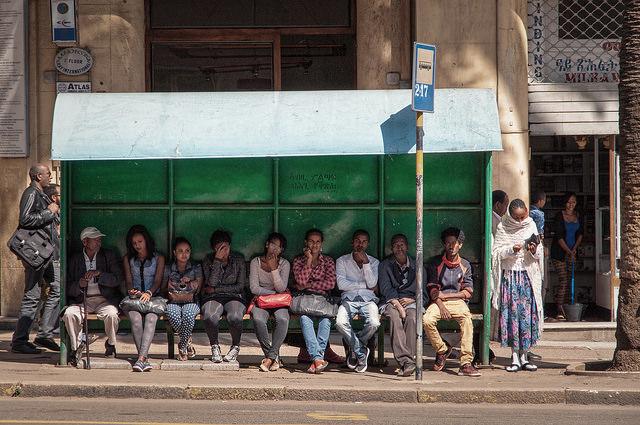 Commuters wait for a bus in Asmara, Eritrea. Photograph by Andrea Moroni.

Last year, Eritrea’s School of Law, nestled behind the old University of Asmara and draped in bougainvillea and wisteria, held a landmark event. For the first time since it re-opened in the capital 5 years earlier, the college invited a non-Eritrean speaker to address its students.

Even more notably, that invitee – a legal professor from the Red Cross – covered a variety of contemporary topics, including a lengthy conversation about the Ethiopia-Eritrea border. The discussion around the long-standing and highly controversial issue was engaging, reasoned and balanced in a way that one imagines the same discussion would not have been if it took place in London, California or Toronto.

Eritrea is often seen as one of the world’s most highly-repressive states – and is sometimes even referred to as the “˜North Korea of Africa’ – but this episode at the School of Law appears to offer a different picture. Furthermore, academics within Eritrea seem to be pushing various reforms in education that ought to enhance openness of thought in the country more broadly.

In a highly state-controlled country with few freedoms, changes such as these need to be taken with a degree of scepticism. But how should we interpret these recent trends in education?

Outside Eritrea, many people might scoff at the suggestion of there being “˜higher education’ within the country.  But up until fairly recently, the University of Asmara was regularly educating students who would go on to study at top-flight international programmes.

However, this changed in the mid-2000s when the Eritrean government dispersed the university around the country. The official rationale was that this would democratise access to tertiary education and encourage growth across Eritrea.  But opponents of the move were sceptical. Some saw it as a cynical attempt to weaken students’ revolutionary potential – disperse them to seven locations around Eritrea and they will never form a critical mass, the argument went – while the most ardent critics went even further, suggesting the government was deliberately trying to produce a less-educated and therefore more subservient population.

Testimony from staff and students who have passed through the new college system suggest there has been a noticeable reduction in academic expertise and output since the change. Swish new buildings do little to disguise a lack of resources, and despite large numbers of Indian staff being employed to mitigate the shortfall, there remain chronic shortages of skilled personnel.

Education in Eritrea also remains highly constrained. In the first place, students do not pick their own colleges and courses but are allocated to them based on the results they achieve at the Sawa military training camp regardless of their individual aspirations.  This hardly fosters motivation. Meanwhile, although some students manage to secure graduate positions at international universities, many are thwarted in their attempts to attend them because their exit visas are refused.

Within these limits, however, there may now be signs of positive developments being enabled and encouraged.

For instance, there are fresh attempts to provide post-graduate courses within the country, whether through taught programmes within the colleges or through e-learning initiatives. Additionally, the first major international academic conference since the early 2000s is being scheduled for July 2016. The theme for the event will be the future of Eritrean Studies. Panels are unlikely to focus on human rights abuses, the national service or democracy (or lack thereof) in the country. But, promisingly, suggested topics do include issues around foreign relations, climate change, migration and human trafficking.

Alongside these developments, the Journal of Eritrean Studies has also been relaunched recently. Predictably, the journal is devoid of politically controversial topics and the standard of the submissions is notably inconsistent. But the third edition is on the way.

And finally, the government is reported to have put aside 10 million Nakfa ($650,000) in a competitive fund for researchers of any nationality wishing to study Eritrea, though this may need to be seen to be believed.

Nonetheless, from inviting in speakers on contemporary global issues to re-establishing a national research journal, several Eritreans appear eager to rekindle a system of higher education with as much to offer students as the University of Asmara did in the early 2000s.

So how should we understand these trends? In much analysis of Eritrea, events tend to be interpreted primarily through the prism of existing debates around President Isaias Afewerki’s hold on power. For instance, potential improvements to healthcare or attempts to re-engage with the international community are often explained away as either just misleading propaganda or as placatory measures by the government to keep domestic dissent on the right side of rebellion.

This same lens could be applied to these developments in Eritrean education.  However, while important, this kind of questioning devalues the ingenuity and efforts of Eritreans themselves. Individuals that remain in Eritrea are often portrayed as suffering and trapped or as co-opted, naí¯ve or deluded. And this framing ignores the ways in which Eritreans are actively trying to change things.

These citizen-led efforts are certainly not always explicitly “˜political’, but to dismiss the work of doctors, teachers and nationals service employees as simply “˜propping up’ a failing system devalues the vision of these individuals. A prevailing attitude within Eritrea is that the simplified portrayals of citizen politics discussed outside the country – whereby you’re either with the regime or against it – are unhelpful.

Regarding education then, in many ways the system in Eritrea is a tragedy: foreclosed to those falling short in the Sawa examinations whilst heavily constrained for those permitted to enter; chronically lacking experienced lecturers; and structured to incentivise students to only work hard enough to avoid going back to military service.

Yet attempts do appear to be being made, whether palliative or not, to raise the standards and provide positive inducements for learning within the system. Evaluating these changes according to whether or not they are likely to weaken the government misses an interesting part of the country’s internal functioning. Eritrean (and Indian) academics are using their initiative to produce systems they are proud of, whether alongside or despite the involvement of the government.

When it comes to these changes, it remains to be seen if they will mean fewer students fleeing the country, if they will lead to a re-evaluation of the role that academics could play regarding Eritrean politics, or if they will foster commitment towards international collaborations on “˜Eritrean Studies’. But they do suggest that tertiary education is more dynamic than broad-brush approaches to Eritrea would have many believe.

In order not to dismiss the ingenuity and humanity being seen within Eritrea, we might do well to recognise aspirational and life-enhancing change for what it is and could be, rather than simply for what it is not.