All the exiled people – where do they all belong?

European countries are wrangling over how many (or few) refugees they take in. But how do refugee numbers compare across the world and in Africa? 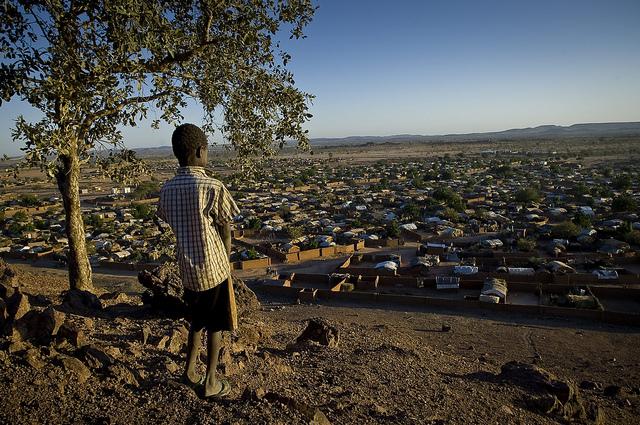 A young refugee looks out across a Chadian refugee camp. Photograph by UNHCR/F. Noy.

To try to get my head around the impact of the numbers of refugees currently arriving in Europe, I looked at global statistics for number of refugees as a proportion of host countries’ populations. While bearing in mind the caveats that a) the latest UNHCR figures are from the end of 2014, and b) the statistics only include people who have formally registered as refugees, it is an interesting guide to the proportions of refugees that different countries recognise and take in.

Mongolia and Madagascar – difficult countries to reach – have some of the lowest number of refugees per head of population. Mongolia has just 6 refugees living alongside its nearly 3 million population, while Madagascar has 11 refugees in its population of around 23 million. East Asian countries such as the Philippines and South American countries also have far fewer refugees than average, probably in part due to the relative political stability in these regions.

Of the “world leaders” with permanent seats on the UN Security Council, France has 256 natives for every refugee and the UK has 541. The big guys have far lower proportions of refugees: the US has 1,204 natives per refugee and China has 4,545. Is this discrepancy the result of indifference or the legacy of imperialism? Do France and the UK still feel a responsibility or guilt for their past in the rest of the world?

At the other end of the scale is Lebanon where there are 4 citizens for every refugee. Nearby in Jordan there are 11.

The problem is not going to go away. The ratio of refugees to citizens globally is high and growing. The countries least able to cope often receive the most refugees. In Africa, Chad, which boasts some of the lowest human development indicators in the world, has a ratio of 29 citizens for each refugee, while South Sudan – a country itself embroiled in a horrible civil war – has 47.

Interestingly, it seems that not many West Africans head to Nigeria when they have to flee. There are more than 100,000 Nigerians for every refugee registered there, which may say something about African perceptions of their giant neighbour and its capacity for hospitality. Sudan meanwhile has 139 citizens per refugee. And the Democratic Republic of Congo, despite bordering 9 countries, has 578 natives per refugee – though that does amount to nearly 120,000 refugees, while the “population of concern” in the country according to the UNHCR stands at a huge 3.6 million.

Africa throws up some interesting figures, but bear in mind that registered refugees tell only part of the story. Most African borders are porous, barely recognised by the millions who cross them every day on foot or bicycle. During unrest, people often flee to a safer area across a border but will do so to find friends or relatives to stay with rather than register with the local government. Some who are fleeing may have little idea of the concept of refugeehood and the accompanying rights. Sometimes, people may remain quietly across a border on the edge of a village through family or ethnic links until the trouble dies down. Only if there is food and shelter to be had might they register as refugees. I have often found that people will make forays back to their homes across the border to rescue possessions, tend the garden and see if it is safe to go back.

The worst case I ever saw was in the Ogaden in Ethiopia in 1991. This was traditionally Somali territory given to Ethiopia by the European imperial powers in the 19th Century to please the Emperor and keep him quiet as they carved up the rest of Africa. During the Somalia-Ethiopia war in the Ogaden in 1977-8, Ethiopia drove hundreds of thousands of “Ethiopian” Somalis across the border into Somalia regarding them as a fifth column. Here, the Somali government was fighting a local uprising in Somaliland and recruited the Ogadeni refugees as cannon fodder to fight the rebels. When the rebels overthrew the government, the Ogadeni Somali refugees who had fought for the Siad Barre government were expelled. They found themselves pushed back into Ethiopia which refused to accept them because they were ethnic Somalis. The UNHCR classified them as returnees and therefore did nothing for them. The death rates in those camps were among the highest ever recorded.

That incident did at least result in a change of the UNCHR mandate.

Kenya, a reasonably stable country in a zone of instability, has the highest official number of refugees in Africa with 551,352. That gives it a ratio of 83 Kenyans for every refugee. Since it sent its army into Somalia to attack al-Shabaab, the militants have attacked Kenyan soft targets. Kenyan Somalis have become victims of random racist attacks and have become more and more alienated from the rest of Kenyan society despite living in Kenya since before the borders were drawn up by the UK during its imperial takeover. But Kenya also has the largest refugee camp in the world at Dadaab on the Kenya-Somali border, now 20 years old with around 330,000 refugees – most of whom have never known any other home.

It is clear that we are in for a long war centred on Islamist fundamentalism that is funded by wealthy states and individuals and that has already shown its capacity to attack nation-states and undermine their ability to protect citizens. Refugees – homeless, disorientated, impoverished – will grow in numbers and be a prime target for both sides. The Dadaabs will grow. A more sensitive and less fearful attitude towards refugees might be self-interested for countries across the world as well as being just.