Uganda’s recent court ruling over bride price is another indication that the country is not yet ready to allow women their full rights. 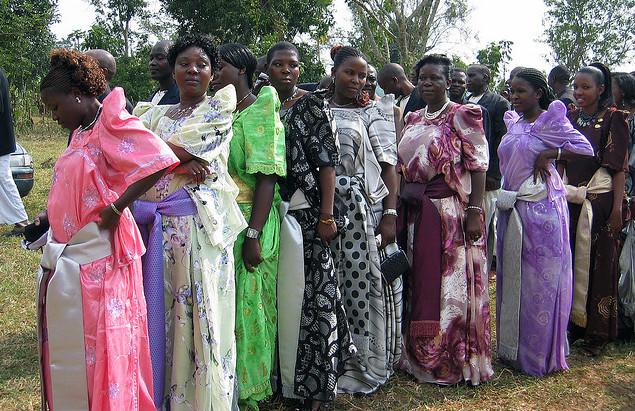 Women line up at wedding procession in Uganda. Photograph by sarahemcc.

Forget the obscure white gown and melancholic church music, what many African women dream of is a colourful cultural wedding. And in Uganda, these weddings are often a jocular affair complete with mock fights and arguments as the groom “convinces” his prospective in-laws that he is the best man for their daughter.

In this machismo display, it is not uncommon for the groom’s spokesperson to boast of how many university degrees the groom and his team have among themselves. They count their pieces of land and scream their job titles so they can be heard above the din of African drums. While the groom’s family roar about these accomplishments, the bride’s guests are expected to sing praises of her meek beauty.

Many women love these weddings and many parents consider them the highest pride a daughter can bestow upon them. And in particular, parents look forward to the awe that the bride price – an assortment of gifts the groom takes to the bride’s family – will inspire among their relatives and friends.

However, things may have changed ever so slightly. Last month, the Ugandan Supreme Court varied the conditions for giving bride price at traditional marriages. Now, the groom might have to tone down his generosity because, the court declared, bride price will no longer be refundable.

MIFUMI, the organisation that constitutionally challenged the tradition of men giving money, animals and other goods to a woman’s parents before he can take her as a wife, sought to have the entire custom of bride price declared a human rights violation.

Campaigners argued that the practice reduces women to little more than chattel. The court disagreed. In fact, the judges said this reading of bride price was a colonial view, arguing that: “The term “˜bride price’ was coined by colonialists because of their failure to appreciate the African customary marriage and the significance of its cultural rights.”

The court also rejected MIFUMI’s assertion that bride price and the traditions of female submissiveness associated with it contribute to domestic violence, a problem that is widespread in the country. In a study by the Ugandan Bureau of Statistics, 68% of married women aged 15-49 reported suffering from domestic violence, and many of them believed it was justified in certain circumstances; in fact, more women than men deemed domestic violence acceptable.

In the end, the Ugandan court seemed to suggest that bride price has a more or less acceptable side – the giving of it – and a totally unacceptable side – the return of it on divorce. This mixed message was characteristic of a court that has made many similarly half-hearted or contradictory judgements – regarding issues such as the fairness of elections, gay rights, and polygamy – and the result allowed the judges to have their cake (condemning elements of bride price) and eat it (not upsetting the status quo).

On this issue, the court’s approach also reflected a common argument made by both liberals and conservatives in Uganda, who insist that worse violations of women’s rights should be addressed more urgently, while “˜softer’ forms of discrimination can wait or are not really all that harmful.

One can certainly see merits to this argument on the surface, but any deeper look finds it to be severely flawed and short-sighted. Of course, bride price is less immediately threatening than, say, domestic violence, and the custom does not directly and necessarily lead to more severe abuses in of itself. But it must be recognised that the tradition is a crucial part of a process whereby women are made as subservient to men as possible. Putting aside the inherent inequalities of the practice, the traditional wedding and effective exchange of goods for a human being is also the crescendo of a deliberate impartation of passiveness into girls from an early age.

The process starts much earlier and is bolstered in countless other ways in Ugandan culture. But bride price and marriage advice such as “˜do not leave your husband even if he beats you black and blue’, “˜never deny him sex no matter the circumstances’ and “˜do not be delusional enough to expect monogamy’ seals the woman’s position as unquestioningly compliant at the dawn of a marriage.

It is understandably uncomfortable for people to look at age-old ceremonies and customs like bride price as the vehicles of patriarchy they are. They fail to see it even years down the road when the wife is abused by a husband who feels justified in demanding that which he was promised in front of an entire crowd at their wedding. They do not see that sexist words, even if spoken partly in jest on the “happiest day of their lives”, contribute to forming a relationship in which abuse is considered defensible.

In Uganda and across the continent, there are both cultural practices and legal provisions that clearly enshrine the paternalistic treatment of women and make men the major decision-makers. In Uganda, for instance, male parliamentarians have opposed a law that would give women equal property rights as their husbands, while the same male-dominated parliament has never taken time to amend the family laws that privilege male over female heirs. Given that these laws do not kill or maim women, amending them is not seen as a priority.

Thankfully, the iniquities of more overt violations of women’s rights such as Female Genital Mutilation are recognised. But the court’s bride price decision, like those before it, is another clear indication that the country (and continent) is not yet ready to allow to women their full rights.

Despite the interconnectedness of the practices, cultures and laws that together constitute a deeply patriarchal and gender-unequal society, the message to African women is clear: if it does not directly endanger or kill you, we are not ready to label it a human rights violation. Sadly, it seems that African women will have to struggle for much longer and assert their rights a lot louder before equal treatment becomes routine and needs no radical justifications.

Patience Akumu is a Ugandan journalist