40 years of hurt: The never-ending scandal of the Western Sahara

For Africa, the UN and the powers in the Security Council, the ongoing occupation of the Western Sahara is an embarrassment.  For Saharwis, it’s a profound injustice. 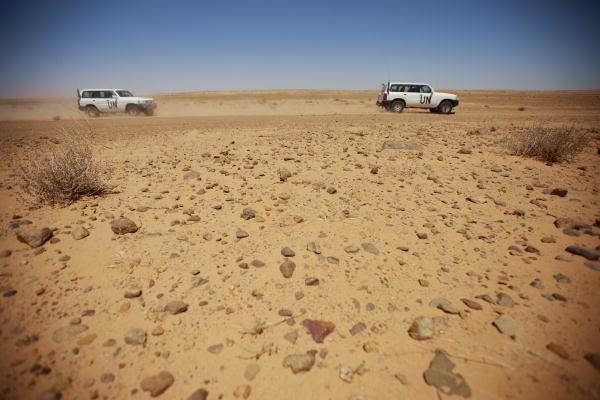 Members of the UN Mission for the Referendum in Western Sahara (MINURSO)’s make their way across the desert. Photograph by UN Photo/Martine Perret.

As Spain walked away, Morocco claimed the territory as part of its ancient empire. The UN had declared that it was up to the people of the territory to decide their own future, but before they could do so, King Hassan II of Morocco organised the “Green March” in which hundreds of Moroccans were bussed to the border and – in front of the international press – pushed into Western Sahara waving Moroccan flags.

Meanwhile, many miles away from the media, columns of tanks, armoured cars and truck-loads of Moroccan soldiers swept into the territory. So too did troops from neighbouring Mauritania which also claimed swathes of ground.

These foreign troops were met by indigenous fighters of the Polisario Front who were lightly armed and no match for tanks and artillery. Gradually, the Polisario fighters and thousands of civilians were pushed over the border into Algeria.

Morocco ignored international calls for it to withdraw and even left the Organisation of African Unity (the predecessor to the African Union) when the continent body declared the occupation illegal.

Polisario kept up the fight and by 1979 managed to force Mauritania to retreat. But Morocco refused to be moved and instead constructed a vast wall of sand and rock and planted mines the entire length of it in order to protect its illegally acquired territory.

40 years later, little has changed. Morocco retains control over the area and to this day huge numbers of Sahrawi refugees live in white tents across the border in Algeria. The Government of Algeria estimates that there are now 165,000 people in the camps, but there has never been an agreed registration exercise. The UN refugee agency’s assistance programme is based on a planning figure of just 90,000 refugees.

By coincidence, in the same year as the invasion of Western Sahara, the tiny pacific territory of East Timor – abandoned by its Portuguese imperial rulers – was seized by neighbouring Indonesia. However, while Indonesia was forced to accept a UN ruling in 2002 when East Timor became independent, Morocco’s territorial grab has been persistently protected by France and, to an extent, the US.

The Western Sahara is rich in phosphates and fish. Its prolific waters are fished – over-fished say some – by European trawlers without oversight.

Relations between Algeria and Morocco have always been bad. Regional rivals, they were on opposite sides in the Cold War; Algeria was backed by the Soviet Union, Morocco by France and the US. The end of the Cold War made little difference to this regional rivalry.

In 1987, I made a film for the UK’s Chanel4 about Western Sahara called The Forgotten War. Even then, the region’s plight was already a distant memory in the international imagination.

We first travelled to the refugee camps in Tindouf, Algeria, then drove across the desert to the border in Land Rovers accompanied by Polisario fighters. Wiry, sharp-eyed and tough, they relished the chance to lob some mortar shells over the wall. We parked the vehicles in a deep gully and crept onto a low ridge opposite the wall. The fighters behind us pumped mortar shells over our heads and we filmed them hitting the wall on the ridge over a mile way.

What we didn’t know was that the Americans had just provided Morocco with ground radar. The Moroccan army’s response was fierce and uncomfortably accurate. The Polisario fighters, determined to prove their bravery – or at least test ours – led us into a shallow valley where they proceeded to light a fire and brew tea.

Most of the Sahrawi refugees who live in five camps near Tindouf are totally dependent on humanitarian assistance. All around is empty desert where rain is rare. Opportunities for income generation were virtually non-existent, but some people kept goats or try to grow vegetables with brackish water by hand from deep wells.

This is the life that the Saharawis have been forced to live. Meanwhile, King Hassan II built new towns on the coast of Western Sahara and brought thousands from Morocco to live and work in them.

In Rabat, I conducted an interview with the speaker of parliament in which he angrily admitted that Morocco imprisoned and tortured those who spoke up for an independent Saharwi republic.

Waiting for the vote

In 1991, a ceasefire was agreed and under the auspices of the UN, a referendum was scheduled for 1992. The vote, however, was postponed again and again and has still never taken place.

In 2000, Jim Baker, the US Secretary of State, tried to revive the process and get agreement between Morocco, Algeria and Polisario to a staged process involving a referendum after five years.

Getting agreement from the clan leaders or even establishing which clan leaders could be counted as true Saharwis was very difficult, not least because they are traditionally nomadic and did not recognise borders. Morocco took advantage of this ambiguity, demanding a say in who was a clan leader and lavishing money on those who were prepared to say they were Moroccan. Speaking to these leaders, I noticed their answers were much more formulaic than the Saharwi clan leaders in the camps in the desert.

Nevertheless, for a while, it looked as if the Americans were going to take control of the issue from the French, but their plan to allow everyone living in the territory to vote was rejected by Polisario.

A few years later in 2003, another attempt was accepted by Polisario but sidelined by Morocco. No pressure from the US or France was made to get the King to comply. The international effort to establish who was qualified to vote and getting them registered foundered. In the end the referendum never took place.

Over the past 40 years then, two generations of Saharawis have been born and grown up in sand-blown tented camps while international efforts have stalled and their colonists in Morocco have flourished economically.

For Africa, the UN and the powers in the Security Council, the unresolved situation in the Western Sahara is an embarrassment.  For the Saharwis, it is a profound injustice.