The crackdown in Cabinda: the hidden politics of Angola’s exclave

According to observers, the Angolan government’s recent clampdown on activism in Cabinda is “no accident but a clear political signal sent from above”. 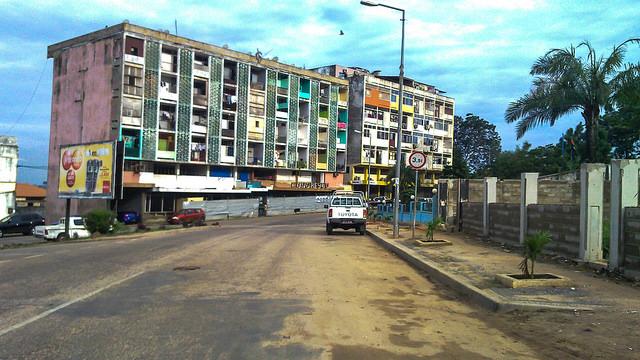 It was January 2010 when the region of Cabinda in Angola made its biggest splash on the world stage. The African Cup of Nations had promised to be business as usual, with only piecemeal international coverage, until the Togo national football team was attacked with machine guns as their bus travelled to the stadium in Cabinda. Two passengers were killed and several others injured.

A splinter group of the guerrilla Front for the Liberation of the Enclave of Cabinda (FLEC) claimed responsibility, setting off a flurry of journalists around the world frantically googling ‘FLEC’ and ‘Cabinda’. But soon after the story had died down, the region disappeared from international headlines.

Yet the tensions that led to this assault in 2010 were never resolved, and the region continues to be one of the areas in which the power of President Jose Eduardo dos Santos, Angola’s leader since 1979, is most harshly deployed. Recently, a number of activists have been arrested on what observers claim are trumped up charges, and resistance is only likely to continue.

Cabinda, a small exclave of Angola separated from the mainland by a strip of the Democratic Republic of Congo, has always had an uneasy relationship with the government in Luanda.

The negotiations that led to Angola’s independence in 1975 included no Cabindan representatives, and many Cabindans resented the territory’s de facto transfer from Portuguese to Angolan authorities. Activists claim the region has a different culture and history to mainland Angola, and for 40 years now, FLEC rebels have waged a low-level guerrilla war for independence.

Luanda has refused to give in to these secessionist demands whilst benefiting hugely from the oil reserves located off Cabinda’s shores, which are among the world’s most lucrative. Angola’s economy is hugely dependent on oil, and Cabinda’s bounty accounts for the majority of national reserves.

The Cabindan struggle for independence has continued through the years, but more recently moved away from guerrilla warfare. The most recent known FLEC attacks were in December 2014 and caused few casualties. Soldiers, it seems, have been replaced by scholars and lawyers in the main movement for secession.

However, that hasn’t stopped the government claiming all Cabindan activists are still linked to FLEC and condemning them as terrorists. Despite pursuing non-violent action, campaigners say that they have been confronted with repressive government tactics and unfair trials.

“These activists who have never acted violently are being accused of plotting a coup against Dos Santos, without arms, without any control over the security forces,” says Lisa Rimli, a former Angola researcher for Human Rights Watch. “The accusations have reached a level of absurdity which makes them unpredictable.”

In October, for instance, activist Jose Marcos Mavungo was sentenced to six years’ imprisonment for planning a peaceful demonstration in what many observers claimed was an unfair hearing.

“Mavungo’s trial was a sham,” says Rimli. A leaked police report linked Mavungo to a man allegedly spotted by intelligence officials with a bag containing explosives and pamphlets “inciting violence”. But Rimli believes the activist was really arrested because he had previously been the leader of Mpalabanda, a banned human rights organisation.

Arão Tempo, president of the Cabindan Order of Lawyers, is another figure to have fallen foul of the government recently. Last month, he was formally accused of rebellion and instigating civil war after being arrested in March for allegedly attempting to bring foreign journalists to cover a banned demonstration.

Tempo, who insists the trial is politically-motivated, told African Arguments he was mistreated whilst being held after his arrest.

He says he was denied the ability to seek proper medical treatment after he suffered a stroke in October and described his spell in detention, saying: “I was humiliated as soon as I was arrested. In prison we weren’t allowed to wear watches, listen to the radio or read papers, and we washed with dirty water.”

According to some Cabindan activists and observers, these recent arrests and clampdown on activists point to a deliberate government strategy.

“The only instrument the current regime has against demonstrations and freedom of expression at the moment is repression”, says Raul Tati, a Cabindan activist who has been jailed by the government previously too. “We cannot yet speak of a political crisis, but there has been a hardening of the regime.”

Meanwhile, Ricardo Soares de Oliveira, an academic at Oxford University and author of Magnificent and the Beggar Land: Angola Since the Civil War, adds: “Mavungo’s harsh sentence is part of the general crackdown – no accident but a clear political signal sent from above.”

A marriage of convenience?

240 miles away from Cabinda in the capital Luanda, a similar crackdown on dissent has attracted unprecedented media attention, partly due to the hunger strike of rapper Luaty Beirão.

Better known as Ikonoklasta, Beirão was arrested with 16 other activists in September after holding a meeting to debate peaceful resistance techniques. They were held by police on charges of organising a “rebellion and coup attempt”.

Although historically there has not been much coordination between activists in Cabinda and the mainland, the government’s current repression across the country could be uniting opponents such as Beirão and his co-accused with their counterparts in Cabinda.

The geographically-separated activists are communicating more than ever and their aims starting to coalesce. “We believe the political changes in Angola through progressive forces could open the way for a solution to the problem of Cabinda,” says Tati.

Any coordination of movements could be little more than a marriage of convenience, and it is unclear to what extent mainland activists would support Cabindan self-determination. Meanwhile, FLEC could also stage a return. However, one thing that seems likely is that President Dos Santos and his government will face increased resistance in the coming months and beyond as economic instability continues.

Both on the mainland and in Cabinda, the Angolan government is faced with strong disillusionment and dissent. And although it has so far not been as high-profile as in Luanda, the lesser-known struggle in Cabinda could be crucial in determining the future fate and direction of the government, country and region. The clampdown on civil society and activism in Cabinda could help the government keep resistance in the exclave under control, but it could just as easily backfire.