Known fondly as The Sheikh by his followers and as a cunning demagogue by his detractors, the influential al-Turabi is trying to shape Sudan’s politics once more. 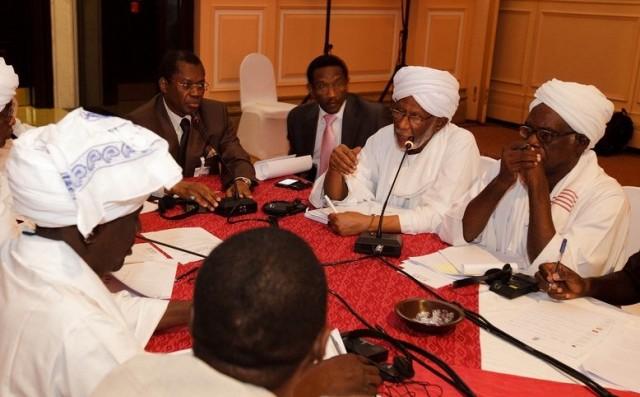 The biggest challenge facing Sudan’s President Omar al-Bashir since he convened a national dialogue in October 2015 is the growing call for a transitional government. This call is emanating loudest not from the armed groups and secular opposition refusing to engage in the dialogue, but rather from some its participants. Leading those calls is the veteran Islamist thinker and politician Hassan abd Allah al-Turabi, who masterminded the 1989 coup that brought al-Bashir to power.

Al-Turabi’s Popular Congress Party (PCP), the only sizeable opposition party actively supporting the dialogue, put forward a vision that The Sheikh (as he is affectionately known by his followers) calls al-Nizaam al-Khaalif, or the ‘Successor Regime’.

The Sheikh has three objectives. First, he wants to unite Sudanese Islamists – who have been side-lined by al-Bashir’s increasingly totalitarian nature – ideally into one party or coalition. He talks of unifying Ahl al-Qibla (‘those who face Mecca’), a wide umbrella that includes the Islamists, traditional parties (the Umma and the Democratic Unionist Party), and even the vestiges of Arab nationalist parties such as the often boisterous Baathists and Nasserites. This amounts to most of the Sudanese right and centre-right parties and those hell bent on preserving Sudan’s identity as an Arab nation.

Second, al-Turabi wants to guarantee a place for the largely marginalised Islamist leaders (himself included) in any future dispensation of power. Realising the devastating blows political Islam has been dealt in recent years, especially in neighbouring Egypt, al-Turabi wants to ensure any political transition or change in Sudan can be managed and, ideally, controlled by his Islamist brethren. Al-Bashir, having proven too skilful a political partner-turned-rival, cannot be trusted to secure the future of the Islamists that put him in the presidential palace.

And third, in the twilight years of his life, The Sheikh is trying to cement (or rather restore) his own personal legacy, having once been a venerable and internationally-respected scholar of Islam and constitutional law. As such, al-Turabi and the Sudanese Islamist Movement (SIM) – Sudan’s version of the Muslim Brotherhood – are attempting to distance themselves from al-Bashir and the regime to which they are historically linked. This legacy includes the secession of the south (widely blamed on the Islamists for their insistence on the imposition of Sharia Law and the Jihad they waged in 1990s), and of course the ongoing wars waged by the government in Darfur, South Kordofan and Blue Nile.

Moreover, the regime’s cavalier and confrontational foreign policy has isolated Sudan, making it a pariah state for most of the past quarter century. In many ways, al-Turabi is responsible for this trajectory, having replaced a democratic government with a totalitarian one, which got out of his control.

It is important to put al-Turabi’s brazen call for a ‘Successor Regime’ into context. Sudan’s distinct version of the Muslim Brotherhood, the SIM, has historically played a central role in Sudanese politics since the country’s independence, albeit under many names. The movement participated on the fringes of the second democratic period (1965-1969) as the Front for Islamic Constitution. Al-Turabi later joined Jaafer Nimeiry’s then-eight-year-old military regime in 1977 and was instrumental in passing the divisive 1983 ‘September Laws’ that ushered the dawn of Sharia Law in Sudan.

Al-Turabi then shed his ties with Nimeiry’s regime after the 1985 popular revolution and contested the 1986 elections as head of the National Islamic Front (NIF). Finally, sick of playing coalition politics with the traditional parties and the secular left, al-Turabi masterminded a coup and overthrew his brother-in-law and head of the Umma Party, Prime Minister al-Sadig al-Mahdi in 1989.

Unrestrained and in total control, al-Turabi launched his infamous ‘Civilization Project’ (al-Mashroo’ al-Hadaari) which was modeled after Iran’s 1979 Shia revolution and was meant to change the entire society. And indeed The Sheikh largely succeeded in changing the face of Sudan.

Few Sudanese remember the 1990s fondly when al-Turabi was at the helm. Many will recall the indoctrination of school-aged children with Wahabist zeal and the street-by-street abductions (kashaat) of young, military-aged men forced to fight a Jihad against their southern compatriots, Muslim and non-Muslim alike.

The so-called tamkeen or purging of non-Islamists of the civil service, military and security apparatus, and the infamous torture chambers, or ‘ghost houses’, were also part of his strategy to change Sudan’s entire body politic. And of course, Sharia law was to be enforced across all of Sudan, even on non-Muslims.

Regionally, al-Turabi supported Islamist movements in Egypt, Libya, Tunisia and elsewhere, both materially and financially. At one point, the leader of Tunisia’s Islamist en-Nahda party, Rashid Ghannouchi, had a Sudanese diplomatic passport during his time in exile. The Sheikh transformed the International University of Africa into a breeding ground for militant Islamists. Though ultimately, political Islamists could not rise above the long shadow cast by al-Turabi’s legacy in Sudan.

For a long time, along with the military and the ruling party (with its infamous security organ), the SIM was one-third of a troika that comprised al-Bashir’s regime. Today, al-Bashir has masterfully picked off and marginalised all senior Islamist leaders that could pose any threat to his absolute control. In turn, the vast majority of Islamist factions now place themselves squarely within the opposition.

Although the SIM has been part and parcel of President al-Bashir’s regime, Islamists in Sudan are not a monolith. A few political Islamist intellectuals like at-Tayib Zain al-Abdeen of the University of Khartoum have distanced themselves from the regime since its inception, while the vast majority of Islamists backed the 1989 coup. Ten years later, a sizeable group broke away from the regime and joined al-Turabi after his unceremonious split with al-Bashir. The Sheikh and his followers formed the Popular Congress Party and labelled themselves opposition.

However, several key leading Islamists helped al-Bashir in his brazen 1999 Palace Coup against al-Turabi, including regime stalwarts such as former Vice President Ali Osman Taha, long-time Oil Minister Awad al-Jaz, veteran intelligence chief Salah Gosh, and long-time special advisors to the president Ghazi Salahuddin and Nafie Ali Nafie. They also allowed the president to hijack control of the Shura Council of the SIM, allowing him to claim to represent political Islam in Sudan.

Al-Bashir has now side-lined most of the senior Islamists that pose a threat to his total grip on the Presidential Palace. He has done so by either forcing them out of the ruling party, as was the case with Ghazi Salahuddin (who now maintains his own Islamist opposition outfit: Reform Now!) or stripping them of any power. But some of these men still command a lot of influence and cannot be simply put out in the cold. So they are often given a seat in parliament with all the trappings of the president’s vast patronage network.

Those that remain inside the fold are al-Bashir’s handful of trusted friends and tribesmen, as well as the rank-and-file of the SIM, who have waited their turn patiently to take over the helm. They have been rewarded with ministerial and gubernatorial positions and populate the civil and foreign service. And not to mention that the military, especially the officer corps, and the infamous National Intelligence and Security Organ are practically reserved for youthful Islamists.

However, the rank-and-file and new cadre of younger leaders that remain within the ruling National Congress Party are now guided by self-interest and not any genuine ideological drive. Sure, the Islamist rhetoric remains and the mandatory chanting of “Allahu Akbar” continues to be a mainstay of al-Bashir’s public rallies and official gatherings. But for all intents and purposes, al-Bashir has been able to purge the senior Islamists from the inner circles of power. He is now alone at the top.

The idea of a ‘Successor Regime’ being peddled by al-Turabi is a last ditch attempt by the octogenarian to ensure that Sudanese Islamists do not face the same fate as their comrades in Egypt. There is a real and present danger that many leading Islamists, including al-Turabi himself, could face punitive, possibly retaliatory, justice if any uncontrolled change takes place.

Al-Turabi’s choice of words is also interesting as he uses the same Arabic root for the word khilafa, or Caliphate. Perhaps, in The Sheikh’s mind, he is trying to avoid the fitna, or schism, that plagued Muslims after the death of the Prophet Mohammed.

For al-Turabi, this ‘Successor Regime’ would be initiated by a national unity government headed by al-Bashir that ostensibly would guarantee freedoms and create an inclusive government that would serve until elections, which a unified Islamist party, in The Sheikh’s vision, would sweep by wide margins. Al-Turabi understands that he cannot remove the charismatic Bashir from office against his will, and the only way to ensure al-Bashir would even consider a transitional government is if he himself is at the helm.

Of course this is all predicated on the unlikely notion that al-Bashir could find anyone else to guarantee his own safety if he leaves power. Similarly, in the unlikely scenario that he is able to convince President al-Bashir to take the ‘Successor Regime’ path, a bigger challenge facing al-Turabi will be getting the Sudanese opposition, with its often feuding armed and civilian factions (especially his brother-in-law), let alone the Sudanese public, to trust him and buy into his vision.

A Successor Regime: back to the future

The biggest failure of al-Turabi’s ‘Successor Regime’ is its failure to accept the harsh reality that political Islam has failed to bring about a renaissance. Rather, its legacy has cemented Sudan’s place in the bottom of most global indices. Moreover, al-Turabi fails to recognise that a non-pluralistic and inclusive vision can never resolve the Sudanese crisis, which at its core is crisis of identity in the country that was once the fault-line between North Africa and sub-Saharan Africa.

Unfortunately for al-Turabi, it is unlikely his ‘Successor Regime’ will see the light of day. The president is too smart to place his fate back in the hands of Islamists. For many Sudanese, Hassan abd Allah al-Turabi will always be the divisive, cunning demagogue whose time in power left Sudan a divided country still fighting over what it means to be Sudanese.

Ahmed Kodouda is regional programme coordinator for Saferworld, an independent international organisation working to prevent violent conflict. He can be reached at [email protected].