The core of the Islamist’s ideology can be difficult to pin down, but what united his many conflicting visions was the belief that they could be realised through the seizure of the state. 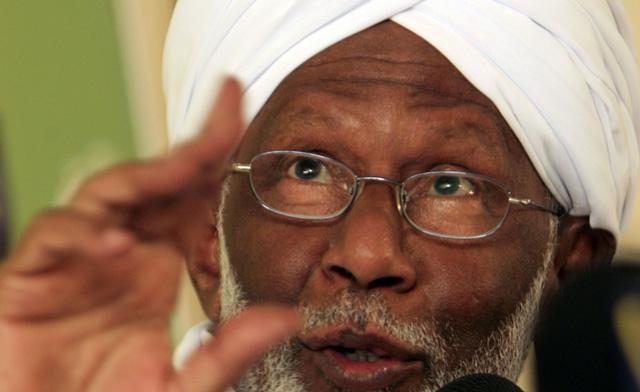 Hassan al-Turabi was an influential figure in Sudan’s politics for over half a century.

On 5 March, Hassan al-Turabi, secretary general of the opposition Popular Congress Party (PCP) and long-term leader of Sudan’s Islamists, died following a short illness. Both his political career and ideology were defined by their contradictions, but al-Turabi will long remain significant as the first Islamist leader to take control of a state within the Sunni Muslim world.

Al-Turabi’s supporters have frequently presented him as a moderate thinker who sought to reconcile Islam with democracy in Sudan, but many will remember him best and bitterly as the man who orchestrated the coup that brought the current military regime of Omar al-Bashir to power in 1989.

However, al-Turabi’s close involvement in Sudanese politics began more than two decades before that pivotal moment. In fact, those who know al-Turabi as the man who aborted Sudan’s last experiment with parliamentary democracy in 1989 may find it ironic that he first rose to prominence as one of the heroes of Sudan’s democratic revolution in 1964.

One month before the outbreak of protests that led to the collapse of Sudan’s first military regime, al-Turabi had galvanised students with a speech at Khartoum University in which he declared that only liberation from military authoritarianism could guarantee the end of Sudan’s protracted civil war in the south. Few outside the Muslim Brotherhood recognised him as an Islamist at that time, but immediately after the 1964 Revolution, he established the Islamic Charter Front to campaign for a constitution based on sharia law.

Al-Turabi was a popular figure amongst the educated elites of the urban areas, and in the 1965 elections, he won more votes in Sudan’s ‘Graduate Constituencies’ than any other candidate. However, his defeat to a fellow member of the al-Turabi lineage in his home district of al-Masid in 1968 illustrated the challenges he faced in breaking the stranglehold of the existing religio-political parties – the Democratic Unionist Party and Umma Party – over the rural areas of northern Sudan where the sufi Khatmiyya and Ansar religious movements (followers of the 19th century revivalist Muhammad Ahmad al-Mahdi) were at their strongest. In 1969, al-Turabi’s former schoolmate Jafa’ar Nimeiri orchestrated a military coup, and the Islamist leader spent most of the next eight years in jail.

It seems likely that two factors from al-Turabi’s first few tumultuous years at the top of Sudanese politics contributed to his transition from democrat to authoritarian, a shift that began with his reconciliation with Nimieri in 1977. The first was the sense that rural Sudan’s ongoing attachment to the sufi and neo-Mahdist religious orders would frustrate his attempts to come to power democratically; the second was fear of the potentially terminal consequences of a protracted struggle against a military regime that had already crushed movements led by Sudan’s religiously orientated parties in 1970, 1973 and 1976.

Al-Turabi is often depicted as the architect of the ‘Islamisation’ of Sudan’s laws in 1983, although the reality is more complex. Shortly before the declaration of these laws, Nimeiri removed him from his post as Attorney-General and had two obscure lawyers prepare a draft that reversed a number of al-Turabi’s earlier promises of a liberal interpretation of sharia. Nevertheless, being dependent on Nimeiri’s favour for his own political survival, al-Turabi vociferously endorsed the laws and campaigned vigorously for them to be maintained even after Nimeiri had been overthrown.

This crucial episode highlighted al-Turabi’s trademark capacity for political and religious shapeshifting. It is perhaps telling that his most significant texts were published after he intervened in the Sudanese political arena, and his interpretations of jihad, Islamic democracy and the Islamic State were often reworked to justify political agendas he had already pursued. Like many Islamists, he employed a vision of the past to articulate his own vision of modernity, yet the vision of the future he offered was rarely a consistent one.

While al-Turabi was evidently a political animal who rejected the gradualist and ‘educationalist’ approach pursued by other Islamists in Sudan, a search for his ideological core can be a frustrating endeavour. For instance, he often presented himself as a post-colonial thinker, marketing his brand of Islamism as emancipation from cultural subjection to the West; yet his British colonial education shaped important elements of his worldview.

Following his clandestine takeover via Omar al-Bashir’s military coup in 1989, many salafi jihadists found a safe haven in Sudan, although many of the same individuals denounced al-Turabi as an unbeliever and called for his execution. He used his Popular Arab and Islamic Conference of 1991-1995 to rally radical movements all over the world against Western imperialism, but alienated many of the radical Palestinian factions, negotiated the surrender of Carlos the Jackal (who had sought protection in Khartoum) to the French, and made secret overtures to Western governments. Parties on all sides of the ‘War on Terror’ perceived al-Turabi to be treacherous.

What united al-Turabi’s many conflicting visions of the Islamic future, however, was his belief that they could be realised through the Islamic Movement’s seizure of the state. For Sudan and for al-Turabi himself, this ideological hubris was catastrophic. He had hoped that by ruling Sudan after 1989 via a secret ‘leadership bureau’ that gave its orders to the official government, he would be able to maintain his liberal image while distancing himself from the vulgar necessities that accompanied the military takeover. However, his credibility as a self-professed reformer and moderate was rapidly undermined as he was forced to deny the tortures and abuses committed by the regime he had created, the evidence of which became increasingly stark.

After his rift with al-Bashir in 1999, al-Turabi was quick to blame his erstwhile military allies for the regime’s arbitrary behaviour. But the regime in the early 1990s was so lacking in transparency that it may never be possible to judge the level of his personal responsibility, and whether his re-emergence as a champion of democracy in the late 1990s was part of his long-term strategy or rather a knee-jerk response brought about by conflict with ambitious junior colleagues in the Islamic Movement keen to usurp him.

In the years following his split with al-Bashir, al-Turabi was imprisoned five times and even called on the president to surrender himself to the International Criminal Court to face charges of genocide. Many of the Islamists hailing from Sudan’s marginalised regions, particularly Darfur, sided with al-Turabi after the split, and the government accused him of backing the rebel Justice and Equality Movement in Darfur.

Nevertheless, it seems that al-Turabi himself may have been instrumental in persuading the Darfuri Islamists who joined his PCP party to fight a civil as opposed to military struggle against the regime, fearing that an intensification of the Darfur conflict might lead to the breakup of the country.

The events that follow al-Turabi’s death will probably reveal the extent to which the rift in the Islamic Movement was determined by the animosity between himself and al-Bashir. Without the symbolic al-Turabi at its helm, many elements within the Popular Congress Party may complete the process of reintegration into al-Bashir’s National Congress Party that appeared to have begun in 2015. But without al-Turabi’s restraining influence, other Darfuri Islamists might also be persuaded to abandon the arena of civil politics in Khartoum and join rebel movements fighting the political centre.

However, to anticipate the immediate eclipse of Islamism in Sudan on account of al-Turabi’s passing would be to overstate the agency of the man. Al-Turabi did not invent Islamism in Sudan – many of his followers were as influenced by globally famous Islamist ideologues such as Abu’l Ala Mawdudi, Sayyid Qutb and Hasan al-Banna as they were by al-Turabi himself.

His prominence came from his charismatic personality and his ability to mediate between a number of competing ideological and religious trends, including Salafism, Sufism, Qutbism and reformism. When he left the government in 1999, the regime did not so much abandon ideology so much as complete what Olivier Roy characterised in 1994 as the transition from Islamism to neo-fundamentalism, from an ideology that emphasises social and political revolution to one more concerned with regulating social mores.

The increasing visibility of Sudan’s Public Order Police is evidence of this. Nevertheless, al-Turabi himself continued to advocate a revolutionary brand of Islamism after 1999, and his party retained a significant following among student milieus in Sudan. If the regime fails to reintegrate al-Turabi’s former followers into the Islamic Movement, this ideology may still represent the most significant threat it faces.

Dr W. J. Berridge is Lecturer in Global History at the University of Northampton. She is currently writing a book on Hasan al-Turabi, drawing on his numerous Arabic language works.