No one wants to call this one. 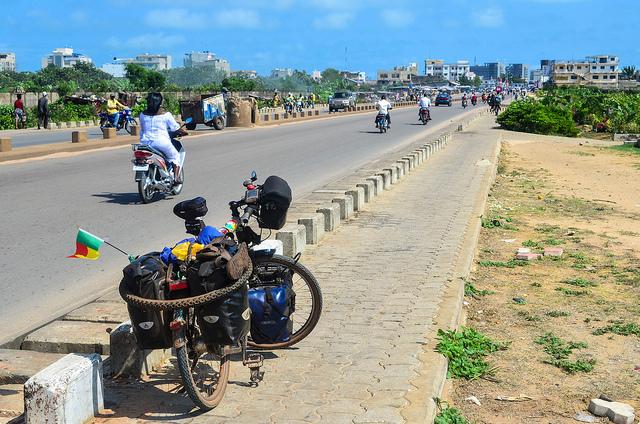 On the road to Cotonou, Benin. Credit: jbdodane.

When applications to contest Benin’s presidential elections opened at the start of this year, there was certainly no shortage of hopefuls. The 2016 vote has been widely expected to be the country’s most hotly contested race yet, and when the process officially opened, some 52 individuals put forward their names.

Due to some uncompleted documents, a dozen ineligible applications, and a handful of dropouts, that number has since been whittled down. But when voters go to the polls on Sunday 6 March, they will still be faced with the task of choosing between a packed field of 33 nominees.

Amongst these figures, there are a handful of clear frontrunners. But in contrast to 2011 when the incumbent President Thomas Yayi Boni secured a first round knockout – albeit amidst accusations of rigging – few predictions this time around are being offered with too much certainty.

One of the reasons for the openness of the upcoming vote is that President Yayi Boni will not be running as his second and final constitutionally-mandated term draws to a close. However, the incumbent’s decision not to contest these polls might not be through lack of trying. Through much of Yayi Boni’s second term in office, there was speculation that he was attempting to amend the constitution and remove term limits, but this plan was thwarted by Beninese activists and voters.

In 2013, the Red Wednesday movement saw protesters wear bright red every Wednesday in demonstration against perceived efforts to change the constitution. And then in April 2015, voters punished the ruling party in legislative elections as the FCBE’s (Cowry Forces for an Emerging Benin) share of the National Assembly’s 83 seats was reduced from 41 down to 33. This effectively put an end to Yayi Boni’s hopes to push constitutional reform through parliament.

Ever since the country’s celebrated 1990 National Conference ended 19 years of military rule and established multi-party democracy, Benin has taken pride in its growing reputation as a “model of democracy” in a troubled West African region. This has been borne out as clearly as ever over the past few years as popular efforts have ensured the precious constitution remains untouched.

Although Yayi Boni won’t be running himself, that’s not to say he will be a disinterested observer come 6 March. After disappointment in the legislative elections last year, the president hand-picked Lionel Zinsou to be his prime minister (a position that doesn’t actually exist in the constitution) in June 2015, and he will be lending this close ally his full support as the FCBE’s flag-bearer.

In terms of the electoral maths, Zinsou is probably the man to beat. Not only is he the nominee of the ruling party, but in a surprise move, he managed to secure the endorsement of the Renaissance du Benin (RB) led by the Mayor of Cotonou as well as the support of the Parti du renouveau démocratique (PRD) led by Adrien Houngbédji. This latter backing is particularly notable given that Houngbédji has long been in a thorn in the FCBE’s side and was Yayi Boni’s closest challenger in the 2006 elections and again in 2011 when he garnered a sizeable 36%.

However, Zinsou is not to everyone’s taste. The son of a Beninese father and French mother, the 62-year-old was born in Paris and has spent most of his life in France. In the 1980s, he was a speech-writer for then Prime Minister Laurent Fabius before working for Danone and Rothschild Bank. He went on to become head of France’s largest private equity fund PAI Partners.

For some in Benin, this illustrious career demonstrates the technocratic competence the country needs; Zinsou has promised to strengthen the economy, alleviate poverty and grow the formal sector. But his Euro-centric background has also provoked some occasionally incendiary rhetoric in the former French colony.

“Let us show that there are still men in Benin, Amazons in Benin, who come together to resist a re-colonising affront to our country,” said one opposition figure in reference to Zinsou this January. Meanwhile the same month, a trade union leader claimed that ruling elites “have parachuted in to us a coloniser whose mission is to safeguard the economic crimes of Boni Yayi.”

As political analyst Imad Mesdoua explains to African Arguments, “Zinsou has faced and will no doubt continue to face criticisms from parts of the opposition around his mixed-heritage and links to France. Some have gone so far as to call him ‘France’s candidate’ but those who have rallied around him believe that he is the kind of apolitical figure the country currently needs to grow economically.”

Who’s who?
Alongside Zinsou, the list of the other frontrunners vying for the presidency reads a bit like a who’s who of Beninese political and business life.

Economist Aboudalaye Bio Tchané – former Africa Director of the International Monetary Fund (IMF) and ex-president of the West African Development Bank (BOAD) – is hoping to improve on his performance in 2011 when he came third with just over 6%. Meanwhile, former Prime Minister Pascal Irénée Koupaki – once seen as Yayi Boni’s heir apparent before the two reportedly fell out and the PM lost his job in 2013 – is also looking to spring a surprise.

However, it is two big names from Benin’s private sector whose candidacies have generated much of the intrigue so far.

The first of these magnates is Patrice Talon who has been estimated to have a net worth of some $400 million and is widely considered to be Benin’s richest man. Talon made much of his wealth in the cotton industry after his company acquired a near-monopolistic position following the sector’s liberalisation in the 2000s. With some of these riches from the country’s ‘white gold’, Talon funded Yayi Boni’s election campaigns in 2006 and 2011.

It was shortly after 2011 though that the two elite figures fell out. Talon claimed the root of their spat was the president’s desire to run for a third term; Yayi Boni said the businessman was annoyed that some of his state contracts had been cancelled. Either way, the results of their breakup were dramatic.

In 2012, the government said it had foiled a conspiracy to poison the president, and then in 2013, it claimed to have prevented another coup attempt. Both times, Talon was accused of having masterminded the failed plots and international arrest warrants were issued for the then France-based businessman.

At the end of 2013, a French court eventually rejected calls to extradite him and the charges were dropped in 2014. This paved the way for Talon to end his self-imposed exile, and the tycoon now finds himself back in his homeland of his own volition, touring the country and drawing on his vast financial resources in his campaign to reach the very top of Beninese politics and complete some unfinished business.

The second figure from Benin’s private sector causing a stir in the race is Sébastien Ajavon. Not quite as wealthy as Talon, Ajavon is believed to be Benin’s second wealthiest man having made his riches in the food industry and, in particular, in frozen chicken. He has vowed to tackle youth unemployment and bolster the economy.

Although a self-proclaimed “novice” to the political sphere, Ajavon has reportedly donated money to a number of different political parties in the past and has managed to secure the backing of the Parti social démocrate (PSD), a move that enhances Ajavon’s prospects but one that has not gone down well with everyone in the divided opposition party.

Time for an underdog?

When Benin’s 4.6 million voters go to the polls on 6 March – with a possible run-off to follow two weeks later – they will be faced with a long menu of options. Zinsou may be the plat du jour as things look currently, but with political parties, geographic regions and even some powerful families split, there are many uncertain factors to take into consideration. Even with just days to go before the first round, the feeling is that the field is wide open and some observers are even getting ready for a surprise.

“My guess is that none of the three most powerful candidates [Zinsou, Talon or Ajavon] will win,” Kadya Tall, researcher at the Institut des mondes africains tells African Arguments. “My bet would be on one of the underdogs.”

Tall suggests that at the moment, it is the amount of money each candidate is giving out on the campaign trail that is determining the shape of the race, but that at the ballot box, voters will make their decisions based on who looks the most capable of keeping the country stable.

“The thing the Beninese are most afraid of is war and secession, especially since Yayi Boni’s presidency intensified the salience of regionalism,” she says.

However, while there are no certain bets as to who this candidate might turn out to be, one thing is clear. Whichever way voters choose to go, Benin will soon be getting a new president, replacing one who leaves behind a mixed legacy after ten years in office.

Political scientist Richard Banégas has pointed out that, since 1990, Benin’s “democratic renewal, rather than a linear process, has been an uninterrupted succession of crises, blockages, and tensions that, on many occasions, almost led the country into violence”.

The hotly-contested and unpredictable 2016 elections could prove to be another one of these challenges for the country’s democratic consolidation. But with electoral democracy now a treasured part of Benin’s political identity – and with three peaceful transitions of power since 1990 to boast about already – it is a challenge the country’s electorate will no doubt be looking to meet head on.

James Wan is the editor of African Arguments. Follow him on twitter at @jamesjwan. He blogs, very occasionally, at jamesjwan.com.