Undress for redress: The rise of naked protests in Africa

“Women give life and so to put the most private symbols of motherhood into the public arena is to negate that life and to say those in power are dead to society.” 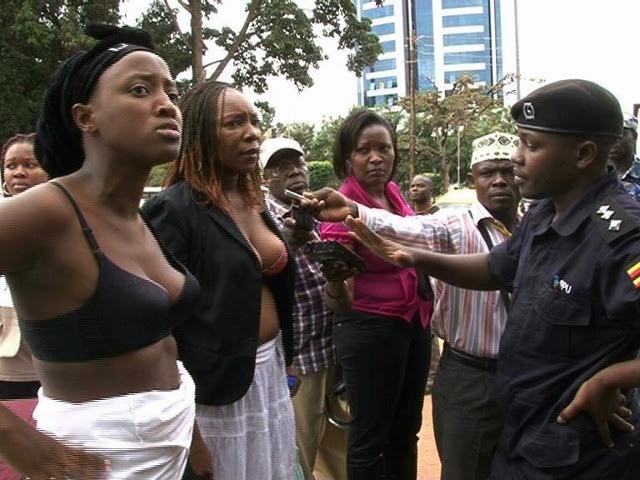 Ugandan women protesting in Kampala in 2012.

A couple of months ago, a firestorm of controversy and debate was ignited in Uganda when Dr Stella Nyanzi stripped naked as a form of protest. The academic at Makerere University’s Institute of Social Research was involved in a dispute with the institute’s director, and in retaliation at being locked out of her office discarded her clothes.

As Nyanzi’s protest hit the headlines in Uganda and beyond, the response was highly polarised. Some Ugandans fully supported the academic’s bold actions, while others expressed outrage.

For instance, on the one hand, opposition leader Kizza Besigye told African Arguments “we’re happy that somebody like Stella Nyanzi has used defiance against injustice and unfairness”, and activist Ingrid Turinawe insisted “women in this country are pushed so hard to do such terrible things”.

But on the other, Minister of Ethics and Integrity Rev Simon Lokodo emphasised that “the government has banned all pornographic activities that are not line with our morals, norms, and cultures”, and an investigation was launched.

Earlier this week, that investigation filed its report, which concluded that Nyanzi should face disciplinary action for gross misconduct and insubordination. The committee behind the report said that Nyanzi’s actions had contravened an institutional rule “which calls upon all staff to at all times act in a reasonable and responsible manner”.

The Ugandan government will no doubt hope that this report will draw a line under the affair and discourage more protesters from following in Nyanzi’s footsteps.

However, despite the impression given by some of the controversy generated by the incident, the mode of Nyanzi’s demonstration was far from new or unique. Nude protests have a long tradition in Uganda and Africa more widely.

“Naked protests in Africa have historically been symbolic forms of collective protest, generally by the poorest and most marginalised women in society,” says Aili Mari Tripp, Professor of Political Science and Gender & Women’s Studies at the University of Wisconsin-Madison. “Women have used these forms of protest throughout history and in many parts of the world, but especially in Africa.”

According to Tripp, naked protests on the continent stretch back to the pre-colonial era when they were used “to shame abusive men into behaving”. Under colonialism, they became part of some independence struggles. And in the last half-century, they have been typically been targeted at government authorities.

In 1990s Kenya, for instance, Wangari Maathai and others used their nudity as a powerful tool in their pro-democracy struggle. During the Liberian civil war, Leymah Gbowee led protesters in threatening to strip naked in an attempt to push warring factions to agree a peace deal. Female activists in the Niger Delta have used nudity in protest at the actions of oil companies. And in 2011, women in Côte d’Ivoire stripped naked as part of a widespread protest against the refusal of President Laurent Gbagbo to step down.

Over the past few years, they have also grown in frequency in Uganda, particularly over the issue of land.

In 2013, for example, 50 women in Lakang Amuru district in the north stripped naked in protest at alleged land grabbing. In 2014, a group of women in eastern Uganda took off their clothes claiming the government wanted to appropriate their property and give it to Soroti University for development. In 2015, an 83-year-old woman in Bukedea District in eastern Uganda took off her clothes in retaliation at a land takeover by Chinese investors. And also in that year, dozens of women in Apaa village, northern Uganda, stripped naked in front of two visiting government ministers in protest at their possible eviction.

According to Florence Ebila Akona, a researcher at Makerere University, this Apaa protest was the “culmination of mistrust, frustrations, anger and anxiety over an uncertain future”, but she also explains that naked protests – in this instance and all others – are much more than just outpourings of desperation. They also convey deep symbolic messages.

“The undressing was most importantly meant to curse the person who had brought all these suffering to them”, says Akona. “But it was also meant to communicate to the men in their community that the men had failed to do their job of protecting the women and their land from being grabbed by foreigners.”

Tripp adds that naked protests represent the strongest of curses that can be leveled at someone, explaining: “Women give life and so to put the most private symbols of motherhood into the public arena is to negate that life and to say those in power are dead to society. It is very difficult to undo such a curse.”

Naked protests thus have a long history in Uganda and on the African continent, though that is not to say they have become any less shocking to many citizens as the often hostile response to Nyanzi’s protest demonstrated.

Monica Emiru, Executive Director at National Association of Women Organization in Uganda (NAWOU), sums up many people’s feelings as she says: “My advice to all women in Uganda is that women are examples of moral behaviors in society and it is really disturbing when the society wakes up in the morning seeing their motherhood naked in public.”

However, it is this ongoing outrage that is the very reason naked protests still carry such symbolic weight and, perhaps, why we may well see more naked protests when communities or individuals are faced with injustices and feel they have no other options left to address them.

“If you’re living in a country where democracy died many years ago, the legal system does not have fairness, you have been pushed to the wall, and you feel you are being humiliated, what can you do? Of course you will have to look for the best way to show how you are aggrieved and mine was to strip naked so that I can be heard,” Nyanzi told African Arguments.

“Many things are not working out in this country and I am just one of those women who are already bitter and they will do anything to get justice in return”.

Nangayi Guyson is a freelance journalist based in Uganda. He writes about social life, business, humanitarian, environmental, religious and political issues from around the African continent.  His work has appeared on Aljazeera English and elsewhere. You can follow him on Twitter at @nguyson or read his blog.