Copper, poverty and tax dodging: At the heart of Zambia’s high stakes elections

With inflation soaring and the kwacha losing value amid plummeting copper prices, economic issues will be front and centre of voters’ concerns as they vote this Thursday. 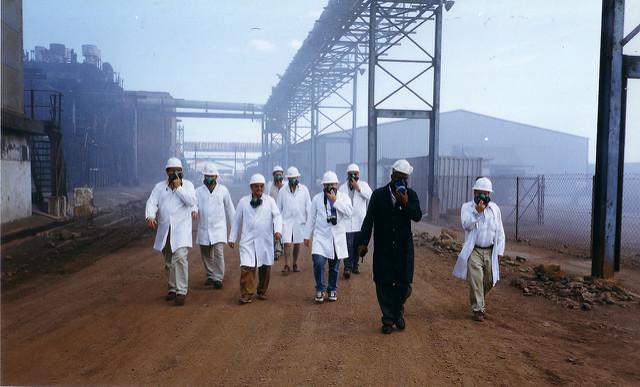 At a copper smelting plant in Zambia. Credit: mm-j.

In advance of this Thursday’s presidential and parliamentary elections, historically-stable Zambia has seen a rise in political violence. Over 50 incidents of violence have been reported, much of it been between supporters of incumbent President Edgar Lungu of the Patriotic Front (PF) and those backing his main challenger, Hakainde Hichilema of the United Party for National Development (UPND).

There are a number of reasons why the stakes seem so high in this election, but the importance of the woeful economic context in which Zambia finds itself is difficult to overstate. Falling commodity prices, lay-offs in the copper industry, tax avoidance by multinationals, and the government’s failure to alleviate poverty during boom times have all contributed to the intensity with which this contest is now being fought.

Zambia’s economic difficulties are front and centre of voters’ concerns. Inflation is over 20%. The kwacha has lost more than 50% of its value since Lungu took office in January 2015. And nearly 15,000 people have lost their jobs as copper prices have faced a global slump.

In fact, these layoffs triggered some of the first violent protests of the election cycle as discharged miners in Chingola last December demonstrated against reduced retrenchment packages as well as the government’s failure to protect them. They were forcefully suppressed by state police. Similar protests in the mining towns of Kitwe and Mufulira soon followed.

Zambia, which relies on copper mining for about 70% of its total exports, has long failed to use revenues from high copper prices to effectively fight poverty. And low tax revenues have dogged the government’s ability to deliver socioeconomic development, even during times of plenty.

An important part of the reason for this is tax avoidance by multinationals. When copper prices reached a recent high around the early 2010s, tax avoidance reached an estimated $2-3 billion/year according to NGO analyses – which is equivalent to as much as 70% of the national budget – or at least $1.5 billion/year according to the government’s figures. Most of this is lost through commercial mechanisms such as companies’ overestimates of costs and understatement of revenues.

[See: How to steal from Africa, all perfectly legally]

As copper prices have plummeted over the past couple of years, the government’s ability to fund development programmes has deteriorated even further. Job cuts and tumbling royalties dealt a double blow to the government budget. And this situation was exacerbated in February when Lungu’s government approved a new, lower mining royalty scheme – halving royalty rates on open pit mines – at the insistence of mining companies.

On the campaign trail, Hichilema has spoken of his plans for the mining industry if he were to win the election. In particular, he has criticised the current administration for failing to develop domestic manufacturing of copper products, pointing to the fact that most of Zambia’s copper is exported raw, yielding enormous value-added opportunities to other countries. And if he becomes the next president, Hichilema – previously a senior executive with accounting firms that advise mining companies and board chair of Barclays Zambia – has promised that he will implement pro-business laws to encourage investment and remove “red tape”.

These steps are likely to please mining companies, but it is unclear if such deregulation would make any more difference to the lives of most Zambians than the PF government’s policies.

Meanwhile, for his part, Lungu’s response to the country’s economic crisis in his campaign has been less clear. His party’s electoral promises have focused on increasing access to health and education, but they have lacked a clear sense of how these programmes would be financed.

Zambia’s economic woes are complex and will be difficult to alleviate regardless of the election result, but there are clear solutions being proposed from some quarters.

At the meeting, the participants urged the government to end tax evasion, concluding: “if we plug this hole on illicit financial flows, we would fully finance our national development plans”. As Saviour Mwambwa of ActionAid says, such tax reform “will be key to guaranteeing that there are sufficient domestic resources to achieve campaign promises”.

Mwambwa also points to Zambia’s new constitution, which will be voted on this Thursday too, saying: “For any government to deliver on its promise of ensuring economic, social and cultural rights under the new constitution, it will have to mobilise sufficient reliable and predictable financial resources.  Tax revenue, including from mining companies, is the surest way of making this a reality.”

Civil society groups are thus clearly demanding tighter regulation when it comes to mining, so it is worrying that Hichilema is proposing deregulation, especially given that protections against mining companies’ local impacts are already weak.

As Edward Lange, Zambia Country Coordinator for Southern Africa Resource Watch, explains: “The relationship between multinational corporations and the government has brought a lot of displacement of indigenous and local communities, thereby contributing to widespread poverty in mining zones.”

The participants at the Alternative Mining Indaba urged mining companies to seek and respect the free, prior and informed consent of local people for any projects that require such displacement. “Campaign messages have not taken on board companies’ records of human rights abuses, [and are] instead prioritising steps to attract foreign direct investment,” adds Lange.

Whatever the result of this week’s election, the new administration will face serious challenges in trying to alleviate Zambia’s crushing poverty, deliver decent jobs, curb illicit financial flows, and finally deliver on the country’s huge promise.

In doing so, whoever emerges victorious would do well to heed Father Cleophas Lungu’s  advice that: “In the extractive industry, we must put people and not money first…Mining should not dehumanise people but should instead help to uplift their human dignity.”

The president could be only the second ...