The scale of the UK’s involvement in Africa’s resources is staggering. So too is its disregard for the rights of those affected

Africa’s natural resources are being appropriated by foreign private interests who are leaving a devastating trail of social, environmental and human rights abuses in their wake. 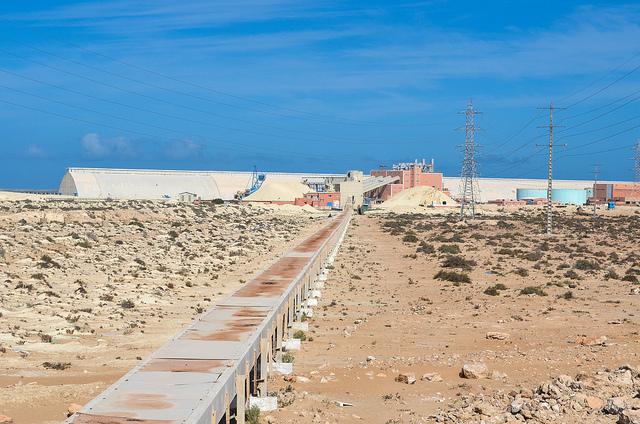 The UK’s approach to Africa is exemplified by its actions in the Western Sahara. Credit: jbdodane.

Over the past few decades, there has been a new scramble for African resources as foreign governments and companies have sought to control the continent’s reserves of minerals, oil and gas.

As documented in ‘The New Colonialism: Britain’s scramble for Africa’s energy and mineral resources‘, a new War on Want report, 101 companies listed on the London Stock Exchange (LSE) now have mining operations in Africa – and combined, they control resources worth in excess of $1 trillion.

As in the colonial period, the UK government has used its power and influence to ensure these British mining companies have access to Africa’s raw materials, though it is not alone. Much of the Global North takes advantage of a global economic system – made up of regional, bilateral and international trade agreements – that opens up countries in the Global South for exploitation.

Under the guise of helping Africa in its economic development – a mere continuation of the colonial paternal narrative – $134 billion reportedly flows into the continent each year in the form of loans, foreign investment and aid. But at the same time, an estimated $192 billion is extracted from Africa mainly in the form of profits by foreign companies, tax dodging, and the costs of adapting to climate change.

In short, the continent is a net creditor to the rest of the world to the tune of as much as $58 billion a year.

The case of the Western Sahara

While the scale and scope of the UK’s involvement in the exploitation of Africa’s resources is staggering, so too is the complete disregard for the rights of the people involved. A key example of this can be found in Moroccan-occupied Western Sahara.

Morocco has occupied much of Western Sahara since 1975. Most of the population has been expelled by force, many to camps in the Algerian desert where 165,000 refugees still live.

Morocco’s occupation is a blatant disregard for international law, which accords the Saharawi people the right to self-determination, which includes the way in which their resources are used.  The International Court of Justice has stated that there are no ties of sovereignty between Morocco and Western Sahara, and no state in the world recognises Morocco’s self-proclaimed sovereignty over the territory. Furthermore, over 100 UN resolutions call for this right to self-determination, though UN efforts to settle the conflict by means of a referendum have been continuously thwarted by Morocco.

Despite the Saharwi people’s right to self-determination, however, six British and/or LSE-listed companies have been handed permits by the Moroccan government to actively explore for oil and gas resources, making them complicit in the Western Sahara’s illegal and violent occupation.

Cairn Energy, based in Edinburgh and listed on the LSE, is one such company. It is part of a consortium, led by US company Kosmos Energy, that in December 2014 became the first to drill for and later discover oil off the coast of Western Sahara.

Saharawis have consistently protested against the exploration activities of oil companies, but by doing deals with the Moroccan government, oil companies such as Cairn have gained access to these reserves and are now directly undermining the Saharawis’ rights.

Foreign oil investment boosts Morocco’s frail veneer of international legitimacy, finances the expensive occupation, and undermines the UN peace process. As oil is developed, the economic implications for Morocco are huge, further cementing its resolve to hold on to its lucrative colony.

Instead of reining in companies such as Cairn, the British government has actively championed them through trade, investment and tax policies. Successive British governments have been fierce advocates of liberalised trade and investment regimes in Africa that provide access to markets for foreign companies. They have also consistently opposed African countries putting up regulatory or protective barriers and backed policies promoting low corporate taxes.

And let’s not forget the revolving door between the UK’s public and private sector.  Many senior civil servants leave their posts for directorships on the boards of these mining companies, and Kosmos Energy is no exception. The former director of Britain’s Secret Intelligence Service MI6, Sir Richard Dearlove, has been a member of the Kosmos Board of Directors since 2012.

The current phase of the scramble for African resources is a clear continuation of British foreign policy goals since 1945. Then as now, access to raw materials is a major factor — often the major factor — in British foreign policy towards the continent. Today, Africa’s natural resource wealth is being appropriated by foreign, private interests whose operations are leaving a devastating trail of social, environmental and human rights abuses in their wake.

As Chris Molebatsi of Mining Affected Communities United in Action (MACUA) in South Africa, says:  “We want to see ethical mining that has respect for the land rights of the people on whose land they are mining. Our demands are for royalties and/or compensation to be paid to communities affected and in particular prior and informed consent to be obtained from those communities, not just from traditional authorities”.