The oil company is back in the UK courts trying to shift the blame for the environmental destruction wrought in the Niger Delta. 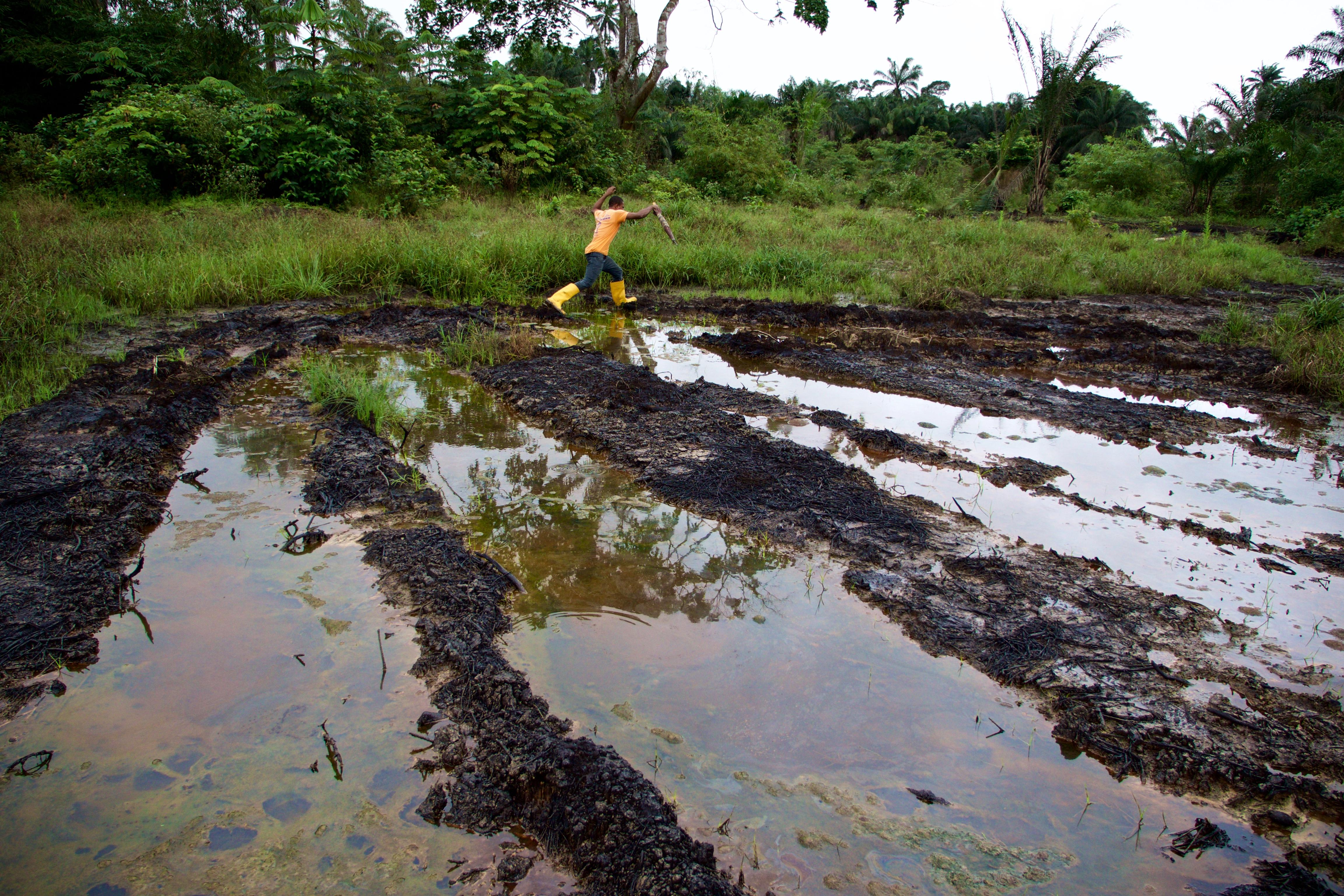 There are hundreds of oil spills each year in the Niger Delta, Nigeria. Credit: Michael Uwemedimo/cmapping.net.

At a hearing in the UK courts this week, oil company Shell asked the judge to throw out two legal actions concerning oil spills from the company’s pipelines in the Niger Delta region of Nigeria. Shell doesn’t deny the areas are polluted. Instead, as it has done for decades, the company is trying to shift responsibility for environmental destruction onto anybody but itself.

The claims against Shell have been brought on behalf of more than 40,000 people from two communities, Ogale and Bille. Over the years, these areas have suffered the impacts of numerous oil spills, devastating their environment and polluting their drinking water. The king of Ogale, Chief Emere Godwin Bebe Okpabi, travelled from Nigeria to attend the hearing; in his golden finery and jewels, he cut a striking figure alongside the grey suits of the assembled lawyers and journalists.

This week’s hearing will determine whether the UK court can consider the Nigerians’ claims. Shell would prefer for the case to be heard in Nigeria and its defence team put forward various reasons why.

One of the company’s most striking claims is that the case should not go ahead because it will conflict with a newly-announced government-led programme to clean up pollution in the region. This project followed the landmark 2011 environmental assessment by the United Nations Environment Programme (UNEP), which exposed massive and widespread pollution across the Ogoniland region of the Niger Delta – an area that includes Ogale, but not Bille.

But what Shell’s argument amounts to is an attempt to use the much-needed clean-up process to deny justice to two individual communities, flouting Nigeria law and common sense in the process. Take a step back: Shell has a legal obligation to properly clean-up all oil spills from its pipelines. And this case alleges that Shell has failed to do so in Ogale and Bille. Yet now Shell is trying to suggest that it is in fact up to the Nigerian government to take the lead on cleaning up the mess, something the company is supposed to have done already.

The Niger Delta urgently needs a comprehensive clean-up operation to restore an environment that has been devastated by decades of pollution linked to the oil industry. But UNEP made clear that the clean-up will take another three decades. In the meantime, oil companies cannot use the UNEP report to get off the hook for cleaning up the hundreds of spills that still pour into rivers and creeks every year.

Shell also uses UNEP to argue that the situation in the Niger Delta is “uniquely challenging”, due to problems of militancy, oil theft and the illegal refining of oil. While these are undeniably real issues, Shell conveniently ignores the fact that pollution linked to the oil industry is one of the key drivers of these problems, destroying people’s traditional livelihoods and plunging them deeper into poverty.

[Nigeria’s Buhari faces toughest of tests in the Niger Delta]

Shell is not an innocent bystander thrust into a bad situation. It has been the main oil company operating in the region for half a century and shares substantial responsibility for the current state of affairs.

Unsurprisingly, Shell’s lawyers didn’t mention one of UNEP’s other key findings: that Shell’s clean-up of oil spills has failed to meet standards set out in Nigerian law or even the company’s own standards. UNEP was clear that its clean-up was so inadequate that “the difference between a cleaned-up site and a site awaiting clean-up was not always obvious”.

Last year, Amnesty went to the Niger Delta to see what had changed on the ground since UNEP published its report. What we found was shocking: standing pools of oil and a strong stench of petroleum in the same places where UNEP had exposed pollution four years earlier. One of the sites visited was Okuluebu in Ogale, an area covered in the UK court case, and saw for ourselves that the site was still visibly polluted. When UNEP visited the site, it found groundwater contamination at 450 times the level where Nigerian regulations state that intervention is required.

Repeated promises and commitments by Shell and the Nigerian government to implement UNEP’s recommendations have so far not led to any actual clean-up of pollution in places like Ogale. And for communities like Bille – one of thousands of oil-impacted villages in the Niger Delta outside the relatively small Ogoniland area covered by UNEP – hopes of seeing their environment restored are even further away.

In this context, communities in the Niger Delta are forced to seek justice through legal action in the home states of oil companies like Shell. This case is by no means the first of its kind. In 2015, another UK case forced Shell to pay £55 million ($70 million) in compensation to the Bodo community over two massive oil spills in 2008, while in the Netherlands four fishermen are still fighting for clean-up and compensation in the courts.

Following the hearing this week, the judge is expected to issue a ruling in early 2017. If the claims are allowed to go forward, it will pile further pressure on Shell to recognise that it cannot continue to dodge responsibility for its legacy of decades of pollution in the Niger Delta.