Gambia: Why the army may be the key to getting Jammeh to step down

Domestic, regional and international bodies have all condemned Yahya Jammeh’s refusal to concede defeat. But one significant group still backs him. 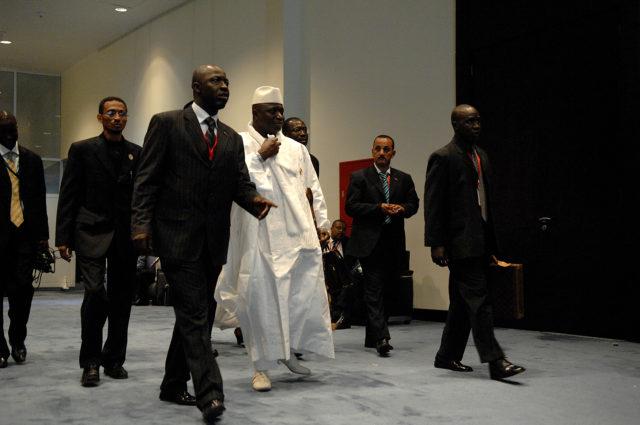 Speaking to opposition leader Adama Barrow on a televised phone call the day after the 1 December presidential elections, President Yahya Jammeh explained: “I call to wish you all the best, the Gambian people have spoken”.

This announcement of defeat was met with a mix of astonishment and elation in the streets of The Gambia. After brutal assaults on opposition figures and denial of international electoral observers, many assumed Jammeh would find a way to win, regardless of the vote count. The coming end of Jammeh’s erratic 22-year rule through the ballot box was seen as a triumph of democratic principles in The Gambia and beyond.

However, the celebrations were cut short one week later as Jammeh retracted his concession, alleging “serious and unacceptable abnormalities” in the election process.

Alarm at this sudden derailing of the transition led four West African Heads of State, as part for the regional bloc ECOWAS, to visit Jammeh earlier this week in a failed attempt to convince him to accept the results. Meanwhile, the African Union, the United Nations, the European Union, the US and others have all publicly backed Barrow.

Pressure has built within the Gambia as well, with the Chamber of Commerce, Teachers Union, Bar Association, Press Union, and Electoral Commission all condemning Jammeh’s about-face.

However, as Jammeh remains defiant, there is one significant group still siding with him: the security forces. When Jammeh initially conceded defeat, the head of the army, General Badjie, also congratulated Barrow and offered his allegiance. But when Jammeh backtracked, so did Badjie, with the armed forces shortly thereafter seizing the headquarters of the electoral commission.

Why do the security forces continue to stand by Jammeh?

Part of the explanation is that the armed forces have been developed and structured around loyalty to Jammeh. Promotions (and demotions) are based on faithfulness, not training, experience, or time in service.  Those perceived as loyal to Jammeh may be moved up several ranks, even from enlisted to officer. Meanwhile those whose devotion is not strong enough can find themselves demoted, dismissed, jailed, and in some cases executed. A murky network of informants within the security services keeps soldiers wary.

There have also long been rumours that part of Jammeh’s loyalty campaign involves recruiting non-Gambians into the armed forces (as he also does for the judiciary). In particular, , he is alleged to enlist members of the MFDC, a separatist rebel group in the Casamance region of south Senegal. This is one of the many ways Jammeh is entangled in the Casamance rebellion. These soldiers would likely have less interest in the will of the Gambian people and be more willing to support Jammeh.

Another strategy Jammeh employs is that he is careful not to keep senior officers around for too long in fear that they will serve as a threat to his interests. At the same time, he knows that groups of dismissed officers could cause trouble. Many of those reportedly ‘fired’ therefore go on to hold ministerial jobs or ambassador positions abroad. The influence of the military should thus be seen as extending beyond just the barracks.

For many in the military, there would be great uncertainty around the fate of the institution under new leadership. Under the last president, Dawda Jawara, the military considered itself marginalised. But upon leading a successful coup in 1994, Jammeh immediately expanded the military and provided better equipment and accommodation. He also created the National Intelligence Agency (NIA) and the notorious paramilitary ‘Jungulars‘.

Under Jammeh, the security forces even have special protection under the law. The controversial Indemnity Act of 2001 gives the president the ability to grant amnesty to security forces that commit acts of misconduct during an emergency. This Act was motivated by the desire to protect police who opened fire on student protestors in 2000, killing twelve.

Individuals within the armed forces may also fear for their personal fate under new political leadership. Immediately after winning the election, members of the opposition coalition began to comment on the possibility of investigating human rights abuses under the Jammeh regime. Such an investigation would aim to shed light on numerous allegations of torture and murder against journalists, opposition figures, religious leaders and others by state security forces.

Divisions in the ranks

However, while many in the military would be concerned at the idea of Jammeh losing power, there are also signs of dissatisfaction within the ranks. Since taking office, Jammeh has endured at least eight coup plots and attempts, the last being in 2014. This suggests there are factions in the army that would be happy to see him go. Additionally, there are numerous cases of defections within the military.

Furthermore, ethnic favouritism is alleged to have created sharp divisions within the forces. Jammeh has given a disproportionate number of senior positions to his small ethnic group, the Jolas. Currently, the head of the Army, State Guards, and National Intelligence Agency are all of the Jola ethnicity. Jammeh’s alarming hate speech against the Mandinka group in the run up to the elections likely only heightened ethnic concerns.

The events in the Gambia over the last week have played out at high levels of politics: statements made by top officials, negotiations with heads of state behind closed doors, and petitions filed to the judiciary.

Following this pattern, General Badjie has spoken on behalf of the armed forces, but it is difficult to tell where individual soldiers stand. So far they have followed orders, but they have also faced little resistance. Their loyalty would truly be put to the test in the event of widespread street protests or an international military intervention. However, these would both be highly risky scenarios and at present there does not seem to be an appetite for either.

Regional meditation efforts led by ECOWAS are presumably focused on creating incentives for Jammeh to concede defeat, potentially in exchange for immunity. But they are now at a standstill. However, bearing in mind the security forces’ importance in ensuring a peaceful transition, the talks may need to be expanded to discuss the future of senior military officers and the place of the armed forces more broadly too.

If Jammeh does finally step aside, convincing the armed forces to accept Barrow as their new Commander-in-Chief would only be the first step.  Barrow would also have to deal with Jammeh’s legacy within the security services, where many of the institutional structures and procedures have been hollowed out with his carrot and stick tactics.  The outgoing president would also leave behind a highly trained and armed paramilitary with no set place in the security services.

After 22 years of severely strained relationships between civilians and the Gambian armed forces, rebuilding trust will likely take much longer than Barrow’s three-year term. But as Jammeh remain defiant, it still remains to be seen whether Barrow will be given a chance to try.

Maggie Dwyer is a Research Fellow in the Centre of African Studies at the University of Edinburgh. She focuses on politics and security in Africa, with a particular interest in militaries. Follow her on twitter at @MagDwyer.