Detainees rounded up in the state of emergency were treated to a six-part course that included units in “Constitutional Democracy”, “Colour Revolutions” and “Ethiopian Renaissance”. 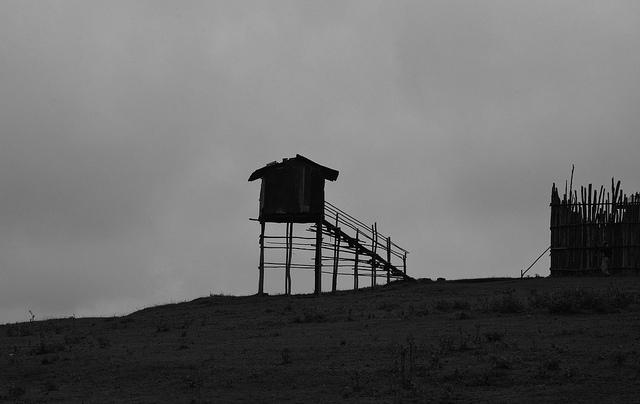 Looking drained last month, thousands of Ethiopian detainees swore on their release from prison to “Never Again” protest against the government. Or at least that’s what was written on their t-shirts in the well-choreographed scenes shown by the state broadcaster.

On 21 December, this group of mostly young men was departing Tolay, a military camp turned detention centre in south-western Ethiopia. They had been incarcerated for over a month undergoing what the government refers to as a rehabilitation programme.

Prime Minister Hailemariam Desalegn attended the ceremony that marked their release. In his speech, he reminded the former detainees that they have a “constitutionally enshrined right” to express dissent, but warned that if they resort to violence, they will “pay a price”. For many observers, there was a cruel irony to seeing a government educating people about their right to protest having imprisoned thousands over the past few months for exercising it.

Until a year or so ago, Ethiopia had been enjoying strong economic growth and relative stability in a shaky region for a decade. But in November 2015, anti-government protests began to pose a threat to the ruling Ethiopian People’s Revolutionary Democratic Front (EPRDF) coalition, which has been in power since 1991.

Initially triggered by opposition to a plan to expand Addis Ababa into their lands, members of the Oromo, the largest ethnic group in the country, organised widespread protests to demand economic and political equality. They were later joined by Ethiopia’s second largest sub-nation, the Amhara, who also feel disenfranchised. Together, these two groups make up more than two thirds of the country’s population.

Protests and the state’s response to them escalated, and by September 2016, human rights groups were estimating that over 600 people had been killed by security forces. In October, the government declared a state of emergency that allowed authorities to hold suspects without due process. About 24,000 people were detained, often without charge, and sent to camps for “training”.

One of those rounded up was university lecturer and blogger Seyoum Teshome. A week before the state of emergency was imposed, Seyoum had spoken critically about the government to the German public broadcaster Deutche Welle. “Exactly 12 hours after that interview, security forces knocked on my door,” he says.

Seyoum claims that he was accused of possessing illegal pamphlets, but that the police found nothing. Nevertheless, he was sent to Tolay where he spent the next 56 days for allegedly breaching the state of emergency, even though he says he was already detained at the time.

Seyoum says that the conditions in the camp were poor and the treatment harsh. He alleges that he endured physical abuse and that he saw many other internees being harmed. “Fear was supreme,” says the lecturer, but “fused with hope”.

These sentiments are echoed by Befeqadu Hailu, a writer and blogger with the Zone9 collective, who spent over a month in another camp in the Oromiya region. According to him, the cells were packed to several times their capacity. He says that detainees had to dig holes in the field for toilets and that they had to endure conditions of extreme heat, lack of drinking water and limited exercise. “It was ugly,” he says, but says the most difficult aspect was “the uncertainty about what would happen to us”.

According to Seyoum, security forces spent the first few weeks trying to identify the prime troublemakers so they could face the courts. The government has said that 2,500 people detained in the state of emergency nationwide are to face trial, while 10,000 were marked for training and have since been released.

Seyoum says that those detainees were treated to a six-part course run by military and police officials. This involved being instructed in topics such as “Ethiopian History”, “Constitutional Democracy”, and “Colour Revolutions”. On this latter subject, the trainers tried to discredit the series of non-violent uprisings in former Soviet nations and the Balkans in the early-2000s, claiming they were engineered by Western interests.

Other units were named “Ethiopian Renaissance” and “Ethiopian Youth”, while one was simply titled “Never Again”. In these, Seyoum says that, amongst other things, international broadcasters such as the BBC and Voice of America were accused of promoting “an agenda contrary to Ethiopia’s developmental state model”.

According to Befeqadu, the programme wrongly assumed that the protesters were misled into demonstrating and ignorant of the subject matter. But government spokesperson Mohammed Seid insists their education was crucial.

He concedes that legitimate questions were raised during the protests, but claims that many “didn’t recognise there were differences between expressing dissent in a constitutional manner and violence”. “There were illegal demonstrations; there was hate speech,” he adds.

Ethiopia’s ruling party has promised “deep reform” to address the widespread discontent in the country. But while it points to a cabinet reshuffle to show its sincerity, many complain that it is yet to address any of the underlying issues. The government continues to blame protests on external actors such as diaspora activists and neighbouring Eritrea. Meanwhile, the rationale behind the prisoner education programme further suggests an unwillingness to recognise the real concerns driving the demonstrations.

The EPRDF, which was founded by a former rebel group that came into power after overthrowing a military regime in 1991, has never fully abandoned its Marxist-Leninist roots. It often attributes opposition to a lack of awareness and sees education rather than dialogue and compromise as the solution.

[Behind the Ethiopia protests: A view from inside the government]

The shortcomings of this approach are readily apparent by speaking to those who have come through the re-training. “Here is the thing though: I don’t feel any regret at all, because I haven’t done anything illegal or wrong,” says Seyoum. And, he adds, the political and economic questions raised by protesters are still yet to be addressed.

After the state of emergency was declared in October 2016, a sense of order appears to have returned to Ethiopia. The declaration is scheduled to be lifted in May, but the government hasn’t ruled out extending it. And it is probably only then that it will be clear whether the EPRDF’s mixture of indoctrination and intimidation has had the desired effect – and whether the “rehabilitated” protesters will heed the promises on their pre-printed t-shirts.