Towns and cities used to be safe MDC strongholds. Not anymore. 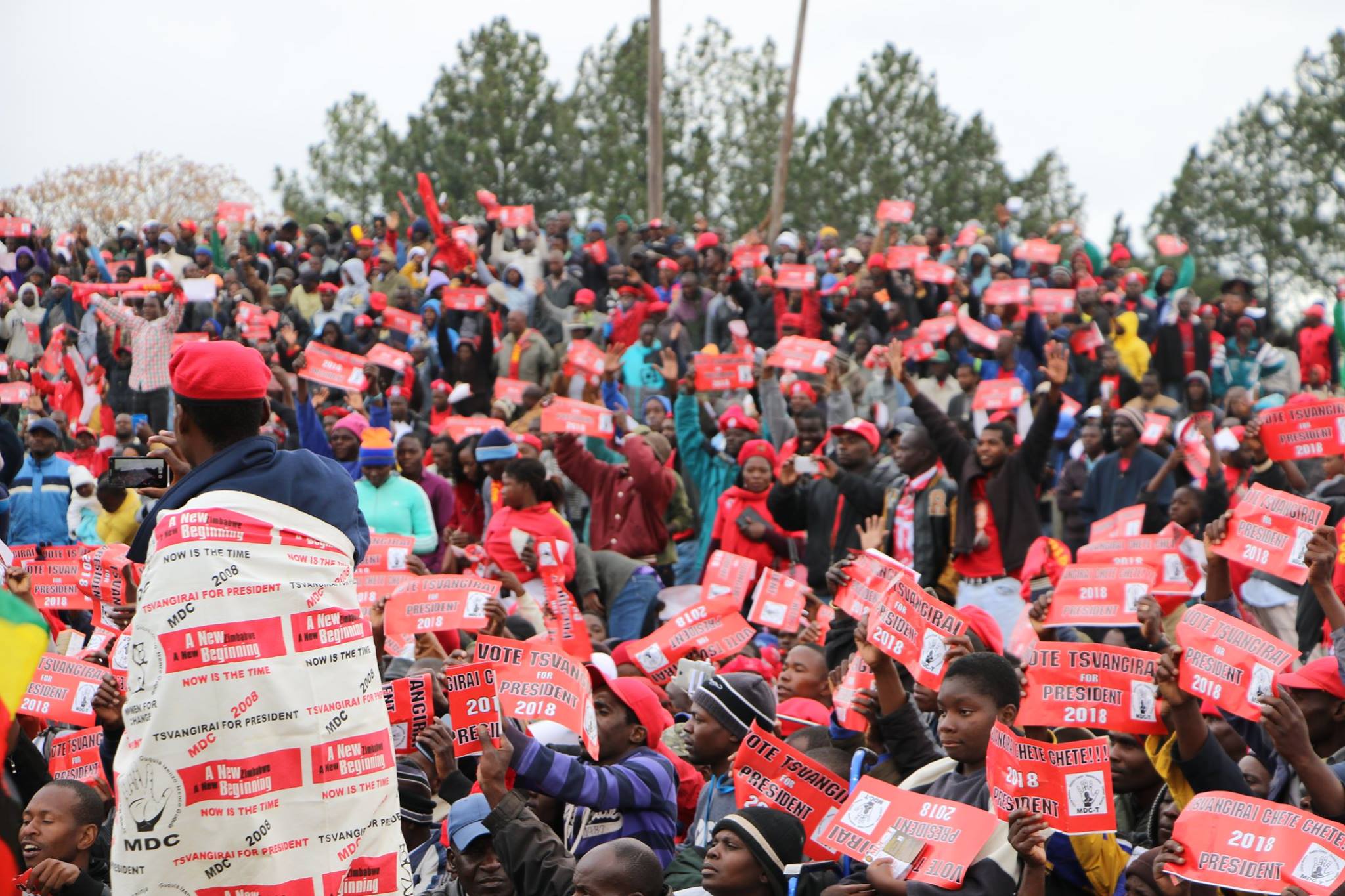 As Zimbabwe heads for elections in 2018, all the economic warning signs are there for the ruling party. Under the ZANU-PF, the economy has gone into rapid decline and it’s possible that by the time the polls are held, the new currency of bond notes will be highly inflated.

Yet the party heads into 2018 much stronger than the main opposition, the Movement for Democratic Change (MDC-T) led by Morgan Tsvangirai.

Since the MDC was founded in 1999, it has presented the best chance of defeating the ZANU-PF and President Robert Mugabe at the polls. The MDC – or its main splinter group, MDC-T – has come close on a few occasions. But despite Zimbabwe’s current economic travails, the opposition’s prospects for 2018 are not looking good.

The MDC-T suffers from many external challenges and internal weaknesses. But at the heart of its travails lies its diminishing support particularly among urban voters.

Over the last four years, the MDC-T has lost key seats in previous strongholds. Poorer citizens in towns and cities are frustrated with opposition politics. Trust in opposition parties is at an all time low. An Afrobarometer survey suggests that 30% of urbanites do not trust the opposition at all, compared to 15% in 2005 and 11% in 2011. Meanwhile, support among the middle-class has also dropped as many have left the country in response to the declining economic conditions.

The MDC used to be able to rely on a huge urban vote. At its founding, the party focused heavily on economic issues and human rights. This bolstered its support among the frustrated urban middle-class as well as rural voters in areas where ZANU-PF has typically struggled.

In 2000, the opposition mobilised around the constitutional referendum, campaigning for a “No” vote . This helped defeat ZANU-PF’s proposed new constitution, with the majority of “No” votes coming from the two major urban constituencies of Harare and Bulawayo.

In the June 2000 parliamentary elections later that year, the MDC won every single constituency in the urban provinces of Harare and Bulawayo. The party garnered 47% of the vote nationwide, but reached 76% in Harare and 84% in Bulawayo.

In 2005, there was a slight shift. The MDC still picked up several seats in towns and cities in parliamentary elections, but its vote dropped significantly. It won 16 of the capital’s 17 constituencies, for example, but it lost Harare South, a seat it had won by nearly 7,000 votes five years before.

The MDC brushed of this defeat and blamed the government’s gerrymandering, which had redrawn constituency boundaries and reduced Harare from 19 constituencies down to 17. However, this ignored the fact that the party had failed to attract particularly poorer voters.

Harare South was one of the areas worst affected by the government’s widely-condemned Operation Murambatsvina  in 2005 to forcibly clear slums. The clean-up  process left over 700,000 poor urbanites homeless. The MDC’s failure to retain Harare South was a small but important indication that the party hadn’t managed to craft a message that appealed to the urban poor.

In 2008, amidst an economic crisis and inflation rates in the billions of percent, the MDC recorded its best electoral results yet. It gained a majority in parliament, while Tsvangirai garnered 48% to Mugabe’s 43% in the first round of the presidential vote.

Violence and intimidation in the run-up to the second round led Tsvangirai to boycott the run-off. Mugabe was therefore easily re-elected as president. But ongoing instability eventually forced ZANU-PF into a coalition government with the opposition.

In this Government of National Unity, the finance ministry was led by the MDC. Under its watch, the economy improved significantly leading to the expectation that the party would be rewarded in the 2013 elections. But instead, the party saw its vote share plummet. Tsvangirai managed just 34%, while the MDC-T dropped to 30% in the parliamentary vote.

The opposition lost seats across the country, including five in Harare. The MDC complained that ZANU-PF had bussed in voters and pointed to the redrawing of district lines. This may have contributed to the outcome, but the MDC-T also had itself to blame.

In Harare North, for instance, the party put forwards a weak candidate. Theresa Makone was a close ally of Tsvangirai, but she had little appeal among poor urban voters. By contrast, ZANU-PF’s 33-year-old nominee was young, dynamic and a native of the settlements.

In Epworth and Mbare, which were both also badly affected by the 2005 slum clearances, the MDC similarly struggled to strike a chord. In Mbare, the MDC-T’s candidate, Sten Zvorwadza, was at least a young and well-known activist. But the party failed to support him with the financial resources needed to win.

The opposition was divided and strategically weak. Its poor messaging allowed ZANU-PF to take credit for the economic turnaround. And it failed to convince previous supporters and those worst affected by the government’s actions that it had the policies and the vision the country needed.

Following the defeats of 2013, the opposition faced further challenges. A split in the MDC-T led to the expulsion of over 20 parliamentarians in 2015 and triggered by-elections. The MDC-T boycotted these in protest at the lack of electoral reforms, allowing ZANU-PF to pick all but one of the contested seats. This further strengthened the ruling party and undermined the opposition’s standing.

The MDC today looks like a weakened force, including in areas that were once its natural strongholds. The party has failed to provide voters with policy-based solutions to their problems, while also allowing ZANU-PF to hijack its message to poor voters in peri-urban areas. The idea of a grand coalition with other opposition parties has plenty of support amongst voters, but it remains to be seen if it can be made to work.

[Why do opposition coalitions succeed or fail?]

With its considerable parliamentary majority, the ZANU-PF government has imposed policies that hurt the poor and cause people to lose their livelihoods. But instead of capitalising on this, the MDC has allowed the government to turn around and offer solutions to the very problems it created.

ZANU-PF is also managing to elevate young people at a faster rate that the once youthful opposition party. Following the rise of the citizen movement in 2016, led by political newcomers such as Pastor Evan Mawarire, the opposition had a unique opportunity to bring this popular charge under the MDC-T banner. But it missed the chance, and now several of the movement’s leaders have announced their intentions to run as independents.

The MDC, with its focus on human rights violations, is currently failing to address the immediate bread and butter issues affecting the supporters it needs. It has struggled to provide ideas beyond its mantra of “Mugabe Must Go”, which doesn’t resonate as it once might have done, and it lacks the resources to win urban votes.

In poor areas, the party is perceived to be weak on land reform. It is seen to be lacking in ideas regarding resettlement, an issue that is particularly pertinent among young people who are eager to move out of overpopulated areas. Its pledge this April to create “a $100 billion economy within the first 100 days” if elected was laughed off as the pipedream of a policy-deficient party.

The MDC can still be effective, and the 2018 elections are still a year away. But despite Zimbabwe’s economic troubles and the ruling party’s own various internal problems, it appears to be ZANU-PF’s race to lose unless the opposition can find a way to rejuvenate its messaging and engage with voters in the way it once managed to in the 2000s.

Dr Chipo Dendere is Visiting Assistant Professor of African Politics at Gettysburg College. Her primary research is on the democratisation in Africa focusing on the survival dominant parties, the impact of migration on sending countries and the evolving impact of social media in Africa politics.