How the young and restless could change Kenya’s political future

The headlines after 8 August will be about Kenyatta vs. Odinga. But the real contest for Kenya’s future is being waged at a more intimate and local level. 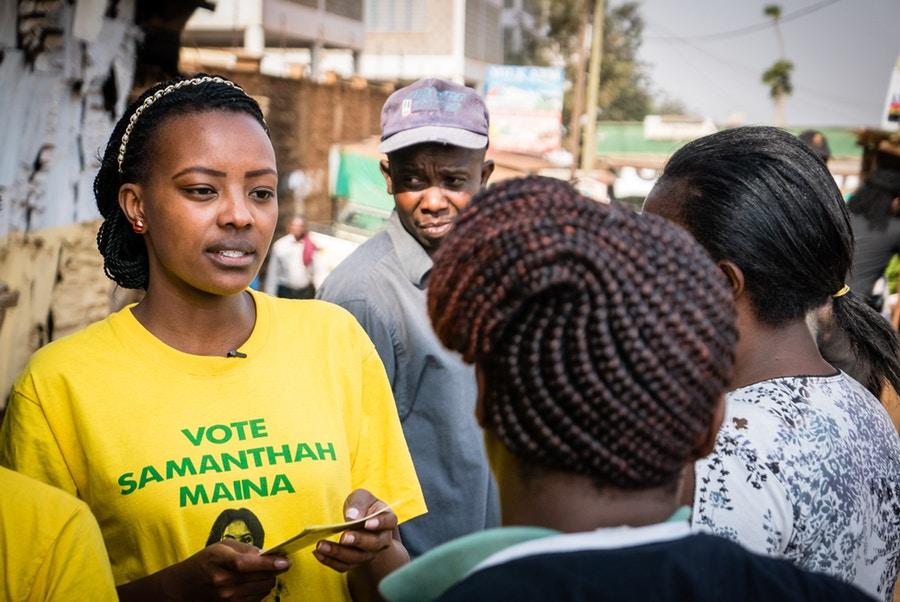 There is an epic battle afoot over the future of Kenya, but it’s not happening where you might expect. As the 8 August general elections approach, the ever-closer contest for the top job is understandably getting much of the attention. But given the only minor differences in their political platforms, it’s unlikely a Raila Odinga presidency would produce markedly different outcomes from a second term under Uhuru Kenyatta.

The real fight for Kenya’s political transformation is unfolding elsewhere and being led by a new generation.

One of those leading this fight is Eddy Oketch, who is running for senate in Migori in western Kenya. He is one of a number of young candidates across the country to have emerged from the country’s social and human rights movements.

For contenders like Oketch, running for office is not just about changing political outcomes but also the modes through which politics is conducted. This has led to some distinct approaches to electioneering.

“My style of campaigning is community-based,” says Oketch from the back of his black SUV as it barrels out of Migori town, his driver nonchalantly accelerating over speed bumps. “Most candidates just go to big rallies with loud music. I meet with people in their communities. I sit down with them in their houses and talk about my policy. They tell me about their issues, I tell them how I think our country should be run.”

The car swerves right and enters a patch of grass between a few houses where around 150 people are waiting. The crowd is made up of locals that the wannabe senator’s advance team has identified as influential.

Oketch jumps out to greet them. What follows is a lively back and forth, alternating between questions from the audience, unabashed campaign rhetoric, and civic education on the role of senators. As the young candidate had promised, this is no typical Kenyan campaign rally. 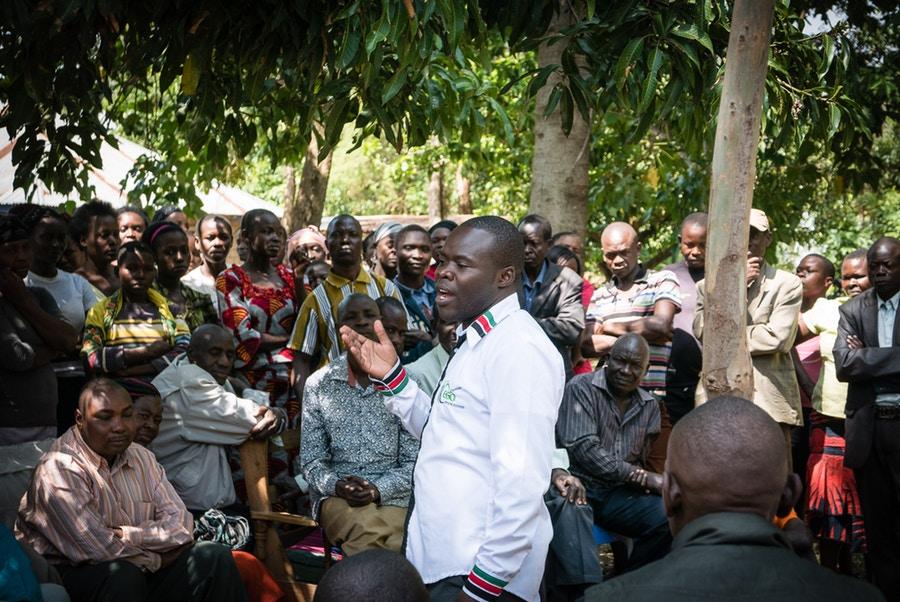 Eddy Oketch making the case for why voters should trust in him. Credit: Peter Doerrie.

However, Oketch does come prepared with a stump speech that he will repeat several times that day. It ranges from his personal story – of how he grew up in Migori and spent time on the streets before getting a scholarship to Yale University – to his policy agenda. He explains that, if elected, his top priorities would include better oversight of the county budget and small-scale agricultural and manufacturing investment to boost economic prospects for young people.

The crowd responds positively, but then this is one of Oketch’s strongholds. Among less supportive voters, those who equate age with experience and personal wealth with political desirability, the fact that the young candidate doesn’t conform to type may be more of a barrier.

Young, female, unmarried, and on foot

Samantha Maina, a 26-year-old running to be a Member of County Assembly (MCA) in Kileleshwa, a ward in Nairobi, has to fight similar prejudices.

“I do not look like a politician. I’m not married – that is an issue. I’m young. I don’t come in a big car, I’m walking. People react to this on the campaign trail,” she says.

Maina takes a more limited approach to canvassing than Oketch, who visits an average of eight communities each day.

“The campaign money is not funding my living,” she says. “I continue to work in our family’s business.” She hits the campaign trail in the afternoons and evenings, walking from door to door in Kileleshwa. The ward is considered middle-class, but today, Maina and her team are in the northern part where ramshackle traders’ stalls and bars line unpaved roads with open sewers.

“I come from a middle-class background and a single parent home,” she says. “Before the campaign I knew few people in the neighbourhood.” She nevertheless insists that Kileshawa is home.

“I’ve schooled here and I’ve seen how bad it has become. There is no local leadership. There are no proper walkways and the roads are deteriorating. We have potholes the size of craters. In some, you can literally leave your car. There is a lack of proper lighting and that increases security issues. We have boda-boda [motorcycle] issues where you are being robbed in broad daylight. I just want to get these things done.”

Around the ward, there are dozens of posters of Maina’s smiling face, but she tries to have direct contact with as many voters as possible. “I want to change things through public participation. I want to go to the people and listen to their priorities,” she says. “This is more intimate. It takes more work, but it is an interesting experience.” She estimates that by the end of the campaign, she may have talked to 2,000 of Kileleshwa’s 24,000 voters in person.

For many people, this is an unusual experience. As one voter commented happily after meeting Oketch, “no politician has come and sat down with us before”. 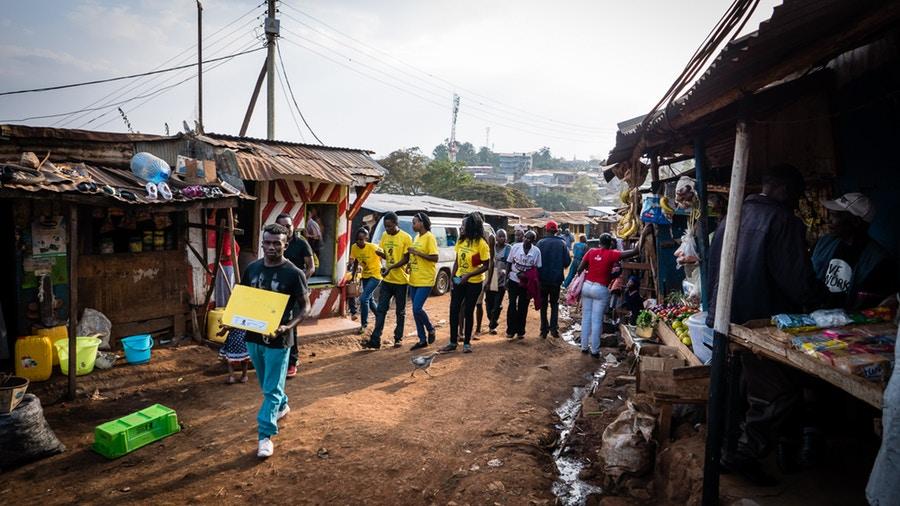 Maina campaigns with some of her team of young volunteers. Credit: Peter Doerrie.

This new style of local electioneering based around policies could prove to be effective in 2017. But it almost certainly wouldn’t have done in the past. It is only since power was significantly devolved under Kenya’s 2010 constitution that local power has been demystified. Unlike previously, voters today can scrutinise how local politicians use their budgets and authority.

In some counties, people have seen roads and bridges being built, while in others they have simply watched as local leaders have come to drive nicer cars.

“Our MCA did nothing for us”, says one voter in Kileleshwa. “I voted for him in 2013, but this time I’ll vote for someone else.”

The new electoral process also works to the advantage of fresh candidates. Except for the president, all other levels of office are elected by a simple majority. This means that with several contenders splitting the field, it is possible to win with even a relatively small fraction of the vote.

When choosing to run for office, both Oketch and Maina decided to reject the big political platforms such as the ruling Jubilee party and opposition National Super Alliance (NASA). Oketch is running as an independent, while Maina joined the Ukweli Party, the brainchild of the prominent activist Bonifance Mwangi. Ukweli, meaning “truth” in Swahili, is only running 12 nominees, having turned away candidates that did not meet its requisite standards of integrity.

In both Oketch and Maina’s races, there are nearly ten contenders, amongst whom the Jubilee and NASA candidates are the greatest challenge. Politicians backed by these coalitions are usually associated with a specific ethnic identity, guaranteeing them support from those that vote purely on those grounds.

Furthermore, because NASA and Jubilee encourage candidates to essentially buy a place on the party ticket, their nominees are, almost by definition, wealthy. $250,000 is considered a normal campaign budget for a seat in the National Assembly.

In Kenya, money has long been the best way for politicians to differentiate themselves from opponents. Campaign swag like t-shirts and drinks, or simply a few Kenyan Shillings in cash, are considered essential to turn out the vote.

“Voters here expect to be given money,” says Oketch. “Politicians interact with them on a very superficial level. You just go and leave money.”

However, this new generation of politicians is eschewing this approach and adopting a strict “no cash” rule. Oketch says that he urges people to forgo the short-term gain of accepting money in exchange for votes in favour of longer-term benefits that come from voting for the candidate with the best policies. “You deconstruct notions like tribalism and the role of money in politics by constantly re-educating people,” he says.

But Oketch and others do not stop there. They are trying to turn the traditional model of money in politics on its head. Instead of distributing money to the masses, they invite people to contribute to them. 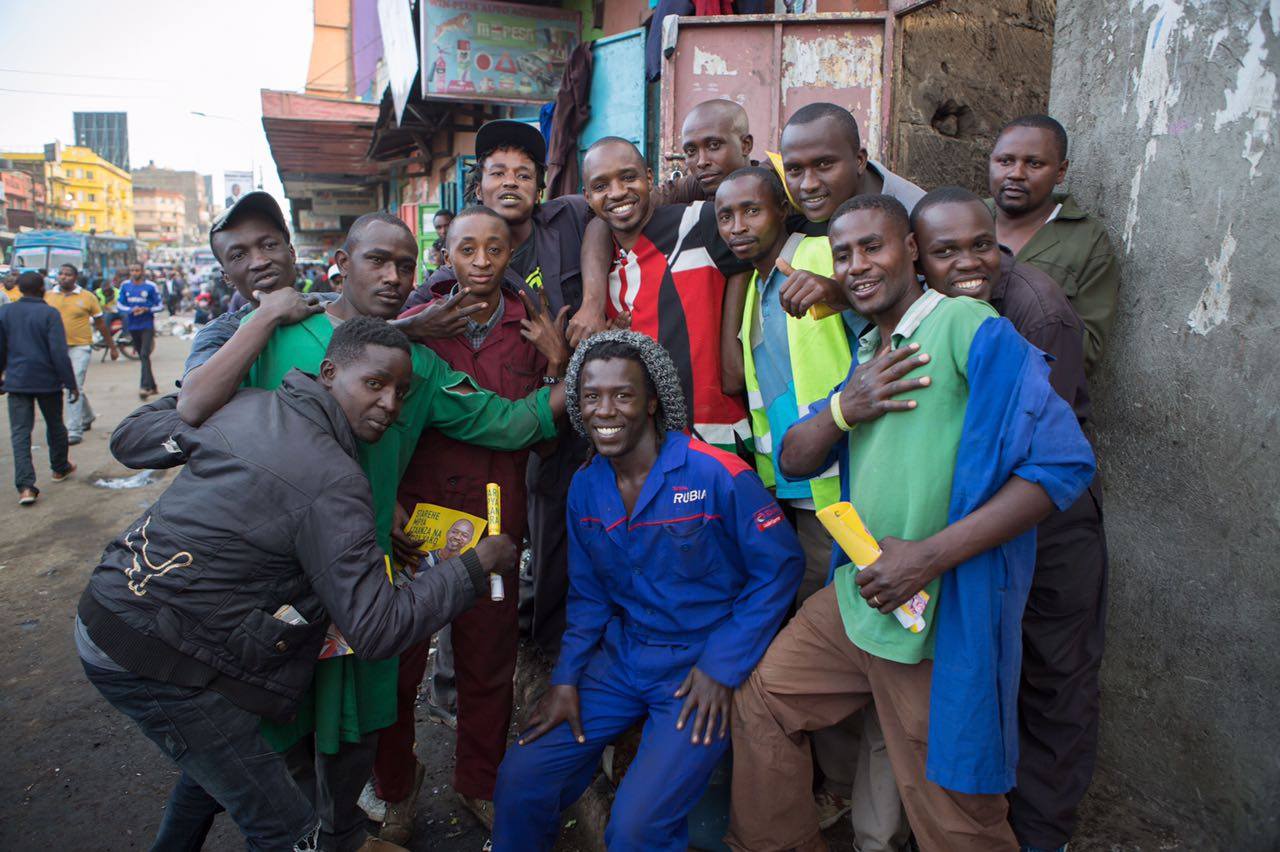 The well-known activist Mwangi has been the most successful in this regard. According to his campaign manager, Khadija Mohamed, he has raised $53,000 through these methods, mostly from small donations. “The split is from all tribes, we can tell by their names,” she adds.

With much less of a public profile, Maina has raised only about $700 so far. But because her campaign team is made up of enthusiastic volunteers, she can spend her entire budget on pamphlets, posters and logistics.

The hard part begins after the votes are cast

Oketch, Maina and Mwanga all say that they have a good chance of winning on 8 August. But nobody knows for sure. There are no reliable opinion polls for these races.

Moreover, even if they do spring a surprise, it is unclear if they will fulfil their campaign promises. Historically, both Kenya and Africa more broadly have had their fair share of reformist politicians come to office only for them to succumb to the pleasures of power.

Willy Mutunga, Kenya’s Chief Justice from 2011 to 2016, has seen a few of these promising revolutionaries turn into power-hungry strongmen. He warns against relying on the inherent integrity of individual politicians.

“We need to bring intellectualism, ideology and politics into new parties like Ukweli,” he says. “You need to build institutions around the individuals. And they need to stay connected to their roots in activism. Social movements need to hold them accountable.”

Oketch is aware of these tensions between being in power and staying connected, but he believes it is possible to bridge this divide. “After winning the election, you go back to the community and every step of the way you walk with them,” he says after a long day of campaigning. “From the time you get into leadership to the time you leave leadership, you should be able to walk with them every step of the way.”

For a long time, there has been a certain way of doing politics in Kenya. But a new generation of leaders like Oketch and Maina, plucked from Kenya’s young population, is refusing to conform. They are forging their own path and changing what it means to be a politician.

The headlines after 8 August 2017 will be about whether Odinga or Kenyatta secured the presidency. But, ultimately, the real contest for Kenya’s future and what it could be is being waged by a new kind of candidate at a much more intimate and local level.