Nigeria’s conflict victims can’t all go home. They must be resettled.

Humanitarian assistance to internally-displaced persons is crucial, but this must be complemented with longer-term policies. 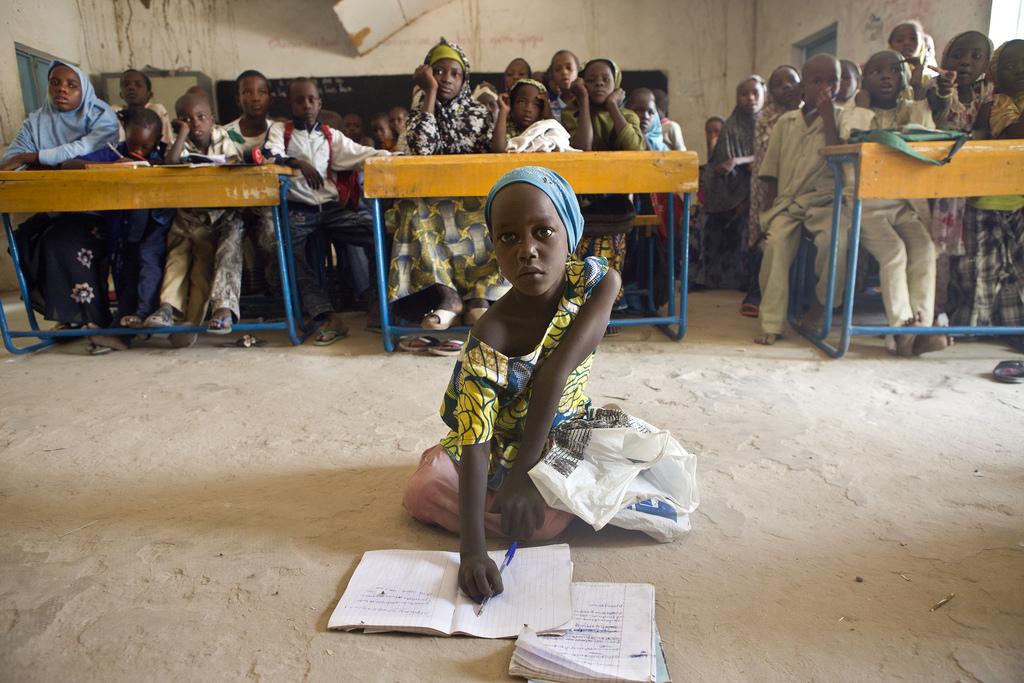 Sala, 6, and her schoolmates study in Niger after being resettled from Nigeria. Credit: UNHCR / H. Caux.

Gripped by multiple humanitarian crises, 2016 saw more people displaced globally than at any time since World War II. According to the UN, 66 million people fled their homes due to natural disasters, conflict or persecution.

Of this number, 40 million remained within the borders of their countries, becoming internally displaced persons (IDPs). These individuals typically settle in camps or host cities before attempting to return home. For many, however, this option is impossible, while for many of those who do return, going back brings with it huge dangers.

For policymakers, the focus should not be on returning IDPs to their old homes, but on helping them resettle in a new home.

Take Nigeria. Violent conflict in the Lake Chad region has driven an estimated 2 million people from their lands, with Nigeria’s north-east at the epicentre. Expelled by the brutal Islamist group Boko Haram, most of the conflict’s victims now live a precarious existence within Nigeria’s fragile borders. Shrouded by uncertainty, IDPs often spend years in limbo waiting to return home. In zones of protracted conflict, they may find themselves waiting a lifetime.

The direct threat of Boko Haram may have subsided recently, but the outlook of IDPs in the region remains bleak. In Nigeria’s north-eastern states, the militants have ruthlessly and strategically destroyed everything in their path. Homes, infrastructure and farms have been devastated, and in many cases, the group has left nothing in its wake but barren land. In Borno state, an estimated 75% of infrastructure has been decimated. Many IDPs are understandably hesitant to return to homes they do not recognise.

What’s more, violence persists, and most areas that are occupied, or were previously occupied, by Boko Haram, remain risky. This makes humanitarian assistance logistically challenging, and recovery perpetually slow. The conflict has led to the near collapse of basic government services. Schools, hospitals, and sanitation systems have all been badly hit, making returning home unappealing, if not impossible.

Unable to return home, resettlement becomes the only option.

Yet this approach is not without its own problems. Simmering regional tensions, unwelcoming host cities, and resource scarcity all make resettlement en masse immensely challenging. The international community and domestic governments must work together to overcome these challenges.

I have visited IDP camps in north-east Nigeria. I have seen with my own eyes the fear and despair of the innocent victims of the crisis. Famine and disease are often rife in IDP camps, although life there is better than the unimaginable tragedy from which people have fled.

Recent UN figures estimate that the IDP crisis in Nigeria will need more than a billion dollars to be resolved, yet to date less than half of this total has been funded. Nigeria urgently needs greater funding and aid to resettle people with nowhere to go and nowhere to call home. Returning IDPs to their desolate homelands will do little more than fuel the same vicious cycle of poverty and conflict that has rendered the region a boiling pot for insurgency.

In order to facilitate the swift and effective resettlement of IDPs, policymakers, governments and donors must focus on certain key objectives. Currently, the focus of policies affecting IDPs has been on camps and providing humanitarian assistance. While critical, this must also be matched with complementary longer-term policies.

Resettlement creates extreme burdens on host communities, especially in the low-resource countries that so commonly accommodate the largest share of IDPs. Host cities need aid and investment – in infrastructure, schools, and public health facilities – to allow for smooth resettlement. IDPs crucially need access to basic government facilities, and this requires investment and commitment.

One vital mechanism of ensuring that migrants and IDPs have access to healthcare in host cities is the provision of certifiable identities and birth registrations. Typically, host states can neither track nor monitor the diseases of IDPs without certifiable identities, limiting the scope of healthcare available. The provision of documentation ensures that each individual is catered for, and that no one is excluded from systems of care. Personal health records have the power to identify underlying illness, ensure vaccinations are administered and updated, and provide individuals with an official identity that will greatly facilitate resettlement in the long-term.

Paired with the necessary physical provisions, a more onerous task in effectively resettling IDPs is creating an attitudinal shift. All over the world, attitudes towards accommodating IDPs are becoming increasingly fraught, jeopardising the future of these people in desperate need. Only with a widespread attitudinal change will IDPs be able to integrate in their new communities and become contributing members of society.

This month at the United Nations General Assembly, policymakers will be focusing on this year’s theme of peace, justice and strong institutions. It is my hope that tackling these issues will pave the way for deeper discussion and action on resettling IDPs around the world.

The IDP crisis needs solutions, and attitudes towards acceptance must change. Now is the time to act and it is both our interest and our obligation to rebuild regions, realign attitudes, and resettle the world’s most vulnerable victims of conflict.

Could a former winner of the Ballon ...

Toyin Saraki is the founder and president of the Wellbeing Foundation Africa.