Could a former winner of the Ballon d’Or become Liberia’s next president?

George Weah was the presidential runner-up in 2005. Ahead of the October vote, he is drawing huge crowds again and hopes to do one better. 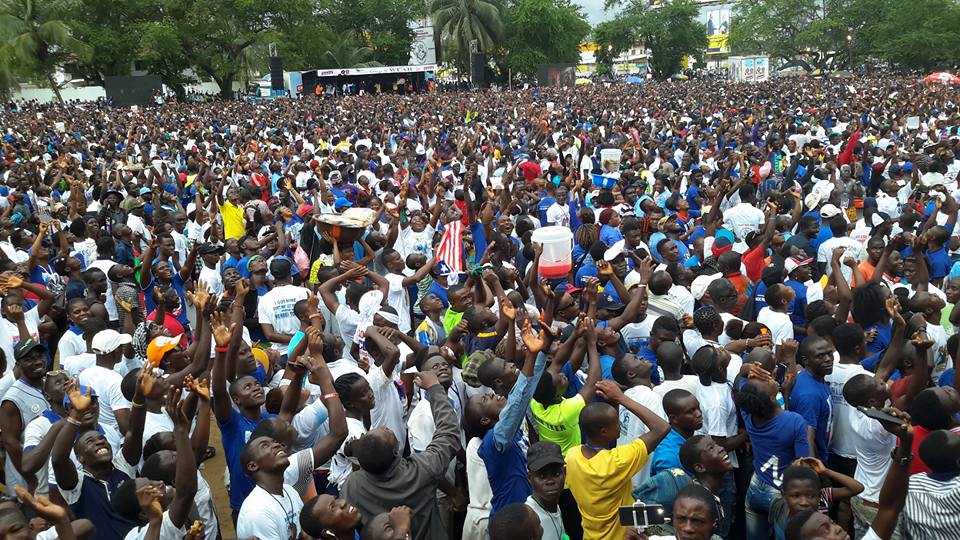 On Saturday, 19 August, ardent supporters of Liberia’s presidential candidate George Weah brought the capital to a standstill. Over the course of 14 hours, the opposition senator, accompanied by Ivorian musician Meiway, paraded through the streets Monvoria as thousands thronged to hear him speak.

Even under the falling rain, devotees continued to dance and chant slogans into the night. Eventually, a few minutes to midnight, the 50-year-old former footballer arrived at his party headquarters in Congo Town to address excited supporters.

“Fellow partisans, throughout the history of our struggle and my political journey, I have been besieged by criticisms and overwhelmed with the question as to why I am seeking the presidency…No amount of negativity will distract me from fighting for change and a prosperous Liberia,” he said to thunderous applause.

With Liberia set to go to the polls on 10 October, political campaigning is now in full swing. The incumbent, Ellen Johnson Sirleaf, is required to step down after two terms in office, which means the country is about to get a new president.

The candidate who would provide the most continuity is Sirleaf’s 72-year-old vice-president, Joseph Boakai. But many Liberians are looking for change. As the leader of the largest opposition party, the Coalition for Democratic Change (CDC), those who attended Weah’s rally see him as the figure most likely to provide it.

“From what I see today there is no way Weah will lose this election,” said Esther Pailey, a petty trader. “Boakai is too old to lead us. Besides, there is no way you can separate Boakai from Ellen.”

“In 2005, Ellen Johnson Sirleaf and her VP cheated us,” said James Sammy, a CDC supporter, referring to Weah’s 2005 presidential bid in which he lost in the run-off. “We accepted the result because we just came from war. But this is our time to win the election.”

[Runners and riders: Liberia gears up for most unpredictable elections yet]

Heading for the top job

Weah first became known in Liberia and around the world in the 1990s for being one of the best footballers of his generation. He played for the likes of Monaco, Paris Saint-Germain and AC Milan, and was the first African player to win the prestigious FIFA World Player award and Ballon d’Or.

In 2003, the same year that Liberia’s brutal civil war ended, Weah retired from football. In 2005, as the country held its first post-war elections, he put his name forwards to contest for the presidency.

Off the back of his popularity as a footballer and despite accusations of his lack of experience, Weah won the first round with 28%. In the run-off against Sirleaf, he lost comprehensively to the former World Bank official with 41%.

Weah stayed in politics, however. In 2011, he stood as the running-mate of Winston Tubman, again losing in the run-off. And in 2014, Weah became a Senator for Monteserrado County after defeating President’s Sirleaf’s son Robert at the ballot box.

Now, as Liberia gears up for this third combined post-war elections, Weah is vying for the top position once more. In a crowded race of 20 candidates, he hopes that his popularity with young people and his extra support gained by joining forces with running-mate Jewel Howard-Taylor, the ex-wife of imprisoned former leader Charles Taylor, could take him closer than ever.

“Weah’s popularity cannot be overlooked,” says political analyst Samuel P. Freeman. “He’s the most popular opposition candidate as we have seen in all the elections he’s participated. If the people we saw at that rally really translate into votes, then Weah stands a better chance than any candidate.”

He faces a strong opponent in Vice-President Boakai, however, who held a huge political rally in Monteserrado County this weekend along with his running mate and speaker of the House of Representatives, Emmanuel Nuquay. The size of the crowds has made some question whether the populous county can still be counted on as a CDC stronghold.

In his campaigns, Weah has promised to transform Liberia if elected. Like his fellow competitors for the presidency, he has made the struggling economy one of his main talking points. Liberia is in recession and the government’s tax increases earlier this year led to mass protests.

Weah vows to turn this around and make Liberia a middle income country. “My presidency will focus on building an economy that will focus more on empowering the lives of the masses and improving their livelihoods,” he announced. “I want to see a Liberia where our market women and petty traders too will own cars and be able to drive to their various areas of business.”

In his campaigning, the opposition figurehead has also honed in on corruption, an issue that has dogged President Sirleaf’s time in office. 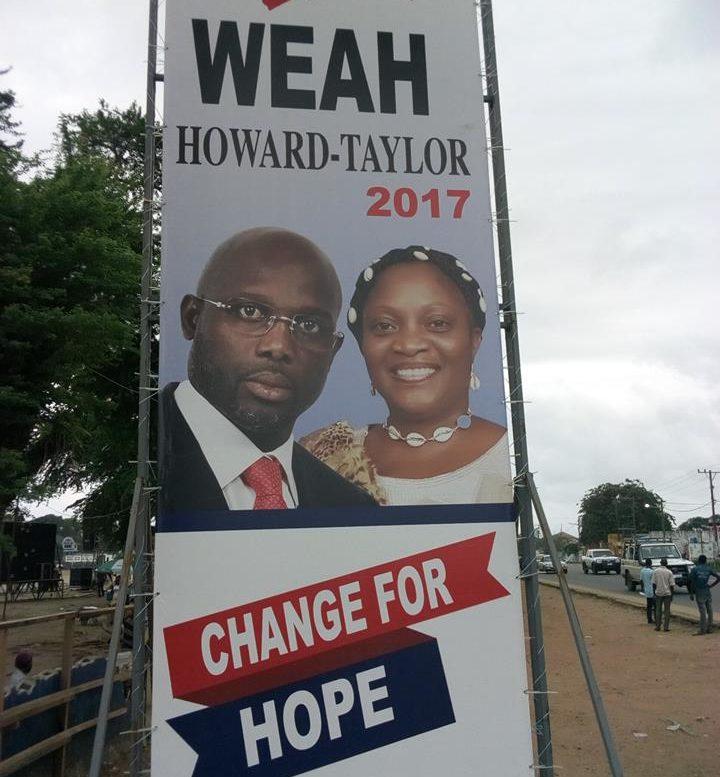 Following 12 years of President Sirleaf, the 10 October elections provide an opportunity for change and a break from the Unity Party’s rule. But it remains difficult to predict which way people will vote. Sirleaf and VP Boakai have a mixed record in office, while a host of new political entrants has further complicated the race.

Some commentators, however, argue that focusing on the presidency misunderstands the nature and depth of Liberia’s challenges.

“No one builds a house beginning with the rooftop,” says Torli Krua, president of Universal Human Rights International. “Liberians focussing on presidential candidates instead of the flawed, corrupt and broken constitution are building their houses without a plan…We have a corrupt system and people are going crazy over a bunch of ignorant 20 aspirants interested only in getting rich at the expense of the people.”

Krua claims that Sirleaf centralised power in herself, and suggests that Weah’s approach would be similar. “Weah’s first and second presidential campaigns were all about putting Weah at the help of power within a corrupt, deadly and broken system. Weah had no plans of changing Liberia’s corrupt system of governance,” he says.

This suggests that a change of power at the top may do little to instigate real change. However, the symbolic act of a transition of power may be transformative in of itself for a country whose brutal civil war ended just 14 years ago.

Many today believe that Weah is best-placed to provide this shift. Freeman suggests that if no candidate gains a majority in the first round and there is a run-off, the opposition parties may well coalesce behind Weah. If this happens, he says, “that’s the end of the Unity Party”.