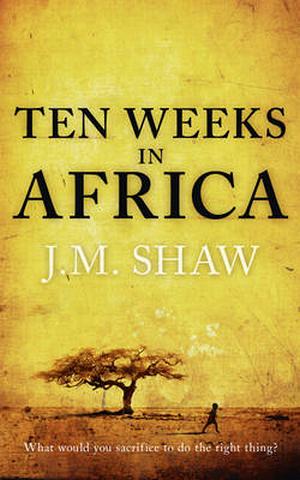 The aid world needs to look to its laurels if it is to avoid becoming the target of a new generation of novelists.   Those of us who while away our time on such things will already know Last Orders at Harrods (2005) by Michael Holman, the former Africa editor of the Financial Times.  Before that there was Cause Celeb (1994), the first novel by Helen Fielding who went on to huge success as the author of Bridget Jones’ Diary.

Having covered Africa for decades, Holman had a gallery of characters to draw on.  Fielding was no expert, but as a young TV researcher in the mid-1980s was swept up in Comic Relief hoopla when the BBC put out a live Christmas Day show from a famine relief camp on the Sudan-Ethiopia border.  Her idea of skewering the twin worlds of media and humanitarian relief was born.

As far as I know, J.M. Shaw is not an Africa expert, either, but his second novel Ten Weeks in Africa, just published by Sceptre, takes on the ambitions, pretensions and, yes, the corruption of the aid world. He spares neither official aid agencies nor the NGOs, the latter sonorously represented by the Global Justice Alliance.

What Shaw may lack in expertise he makes up for in homework.  Unusually for a fiction writer, he sets out in his acknowledgments a whole list of the other writers to whom he is indebted, notably Michaela Wrong for her It’s Our Time to Eat about the Kenyan anti-corruption whistle-blower John Githongo, Aidan Hartley’s personal and professional memoir The Zanzibar Chest and Michael Maren’s The Road to Hell on the seamier side of humanitarian relief. He also names and thanks a dozen other writers for their “˜countless details and insights.’  Among them are Paul “˜Bottom Billion‘ Collier, William “˜White Man’s Burden‘ Easterly, Martin “˜State of Africa‘ Meredith, and of course Dambisa “˜Dead Aid’ Moyo.

It’s fair to say that the plot of Ten Weeks in Africa is J.M. Shaw’s own.  It has all the pace and drama you could wish for.  There’s a conflagration in the slums (deliberately started to clear land for development) security police administer fearful beatings and a rebel army advances and overthrows the government.  There’s even a great escape for the good guys who, for a change, are African.  They make it over a distant land border while expat aid people get out by air.

The main characters, African and European, together make the nice point that it is easier to wear your conscience on your sleeve as a foreigner than as a local who has to balance the case for speaking out against the risk to life and livelihood.   So when the local NGO man Ed Cairns finally resigns in disgust, he promptly gets a new contract in a UN job up the road.

It’s different for Joseph Kamunda, the senior civil servant based loosely on John Githongo, who is in charge of the President’s anti-corruption unit.  Its creation, he explains, is to please aid donors so the government “˜can tick the box that says improving standards of governance – but he [the President] doesn’t want us to do anything. That would frighten the hell out of everyone.’

In exchanges with his idealistic daughter – she must be an idealist: she works for the western NGO – Joseph spells out where he draws the line.  “˜We have a duty to avoid corrupt practices ourselves,’ he says.  “˜Believe me, in this country that’s pretty much a full-time occupation and it makes you extremely unpopular.’  Yet he hesitates to speak out.  “˜… even if you manage to survive, you’re going to leave an awful lot of casualties behind you.’

“˜We’ve survived by being discreet, Bea,’ he concludes. “˜That’s the price we pay for a clear conscience.’

The engine for the plot is the establishment by Global Justice Alliance of an all-singing, all-dancing development project in Makera – for which read the familiar, frequently fictionalised Kibera slum in Nairobi.  Unfortunately for GJA, they have employed the corrupt nephew of a supremely corrupt Minister called Pamela Abasi.  Not only has Milton Abasi managed to filch GJA funds with nothing to show for it, he is also in league with half the government and their security arm to make sure the only development that ever takes place in Makera is slum clearance and high-rise construction.

As the disaster unravels Ed Cairns returns to NGO headquarters, pointedly located in Waterloo, South London, to tell his boss they must cut their losses, declare the project a failure and get out.   This is not head office’s vision, though, because Global Justice Alliance is on a course of rapid expansion.  Far from pulling out, this admittedly “˜sub-optimal’ project is just the beginning.   The Department for International Development, no less, wants “˜to roll the model out, learn the lessons, raise our game, move on.’  Makera is to be the first of a whole series of projects in the world’s slums.

“˜So you’re basically saying we shouldn’t learn anything from Makera,’ Ed says as he walks out.  “˜We just keep handing money to our clients so they can make a fortune pushing people out of the slums.  Oh, and we make sure there’s no evaluation – no follow-up that might upset the funders.  Terrific.  That’s ethical.’

It is just as well that all this is fictional – as made-up as that dramatic escape over the border.  Nothing like this ever happens in real life.  Does it?

Peter Gill is the author of Famine and Foreigners: Ethiopia since Live Aid published by Oxford University Press