Since coming to power, Kenyatta has tried to control the media through co-optation or force. The shut down of TV stations is his latest move. 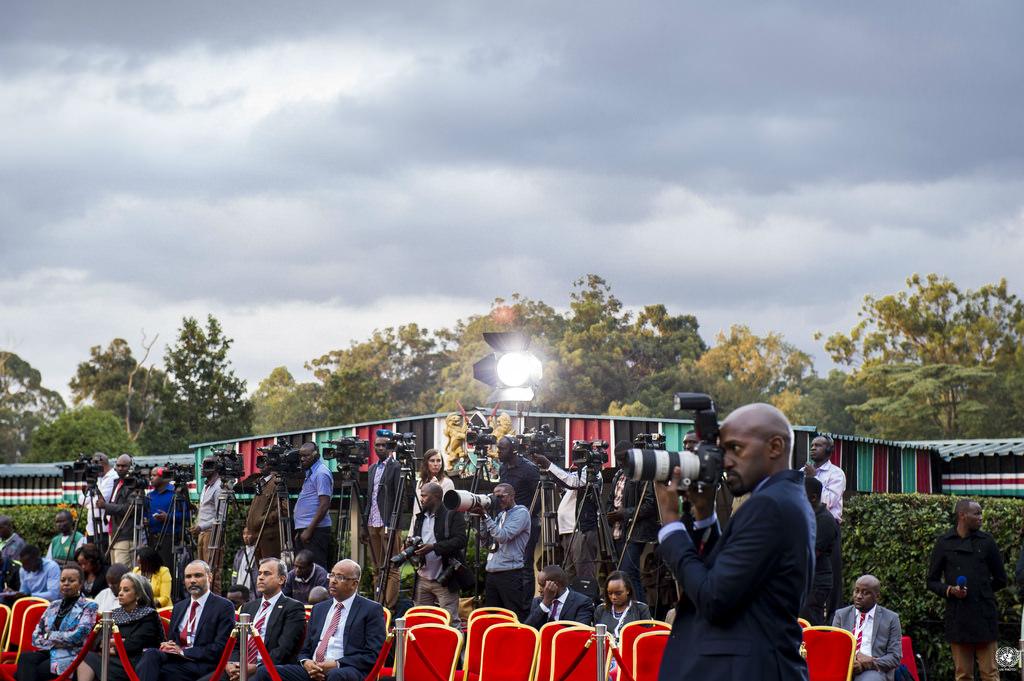 In a move that has exposed Kenya’s fragile democracy, the government recently shut down the country’s three biggest TV stations.

This unprecedented, unlawful and panicked response was supposed to ensure that there was no live coverage of the mock swearing in of the National Super Alliance (NASA) opposition leader Raila Odinga as the “People’s President”. The government outlawed the 30 January event and threatened to charge Odinga with treason.

NASA has refused to recognise Uhuru Kenyatta as Kenya’s legitimate president after he won the repeat presidential election last October. The re-run was held after the Supreme Court annulled the first poll in August. NASA insists it won the August election and boycotted the second poll.

The media shutdown has been condemned by rights groups, politicians, the public and international actors. Not since former President Daniel Arap Moi’s tyrannical rule has a government been so brazen in its disregard for rule of law.

However, while especially alarming, Kenyatta’s latest actions did not come out of nowhere. They are the culmination of a long-running and vindictive campaign against the media that began when he first came to power.

Kenyatta’s clampdown was not entirely unexpected. Since becoming president in 2013, his consolidation of political power has been ruthless. He has established a political system in which there is no clear distinction between the ruling Jubilee Party and the state. The police have been militarised and alternative centres of political power, both within the government and in the opposition, are being dismantled.

Like his father Jomo in the 1970s and Moi in the 1980s, Kenyatta is slowly embodying the image of a dictator through a combination of co-opting Kenya’s wealthy economic and political class, and brute force.

Having won the 2013 elections in a controversial victory made possible through the support of a number of smaller political parties, Kenyatta later insisted on their dissolution and the formation of one umbrella party in Jubilee. He then became the party leader. Where he previously had to navigate the interests of various parties to implement his agenda, he can now make unilateral decisions with minimum opposition.

In his attempts to consolidate his power, Kenyatta has also targeted the press. Kenya boasts a relatively robust media with over 60 TV stations, more than 130 radio stations, and several newspaper titles. But the industry is dominated by three big players: the Nation Media Group, Standard Group, and Royal Media Services. They own NTV, KTN and Citizen, respectively – the three TV stations recently shut down.

At the same time, Kenyatta has invested massively in Mediamax, his family’s media company which owns several radio stations, a television station and a national newspaper.

He has also attempted to co-opt sections of the mainstream media. Soon after his inauguration in 2013, he invited some of the country’s top editors and journalists to State House for a “breakfast meeting”. This, he said, was to open a new chapter in “press-state” relations. The much criticised invitation was quickly repaid with sympathetic and sycophantic media coverage of the government. A few high-level journalists were offered plum state jobs.

However, some sections of the press refused to play ball and the public turned against what was gradually becoming a pliant media. Soon after that, the honeymoon ended and the media clampdown began in earnest. Just one year after becoming president, editors and media managers started getting routine summons to State House. Kenyatta even had the gumption to warn journalists on World Freedom Day in 2014 that they did not have absolute freedom on what to publish or broadcast.

Last April, the government decided to stop advertising in local commercial media. State departments and agencies were directed to advertise in the government newspaper and online portal My.Gov. While it claimed this was to curb runaway spending, it was clear the decision was aimed at starving the mainstream media of advertising revenue. This move came not long after Denis Galava, a top Kenyan journalist and editor at the Nation Media Group, was sacked for writing a scathing editorial about the President.

More recently, the deputy president’s spokesperson threatened a journalist with firing following a news report that claimed the president and his deputy had disagreed over cabinet appointments. Meanwhile, just days before Odinga’s “swearing in”, Linus Kaikai, chairman of the Kenya Editors Guild, claimed that a number of editors and media managers had been summoned to State House and given a dressing down by the president, threatening to revoke the licences of those who broadcast the event live.

Kaikai and fellow Nation journalists Larry Madowo and Ken Mujungu have since been threatened with arrest. They had to go to court to obtain anticipatory bail to bar police from arresting them.

With both houses of Parliament dominated by the ruling Jubilee Party, civil society weakened, and opposition leaders lacking the capacity to meaningfully confront the government, Kenya’s mainstream media remains a rare bulwark against the country’s descent to authoritarianism.

But there are increasingly ominous signs that Kenyatta is on a mission to silence the press as he consolidates his power. These latest events and government’s brazen decision to disobey the court order directing it to end the media shutdown only further shows its disdain for the law and press freedoms.