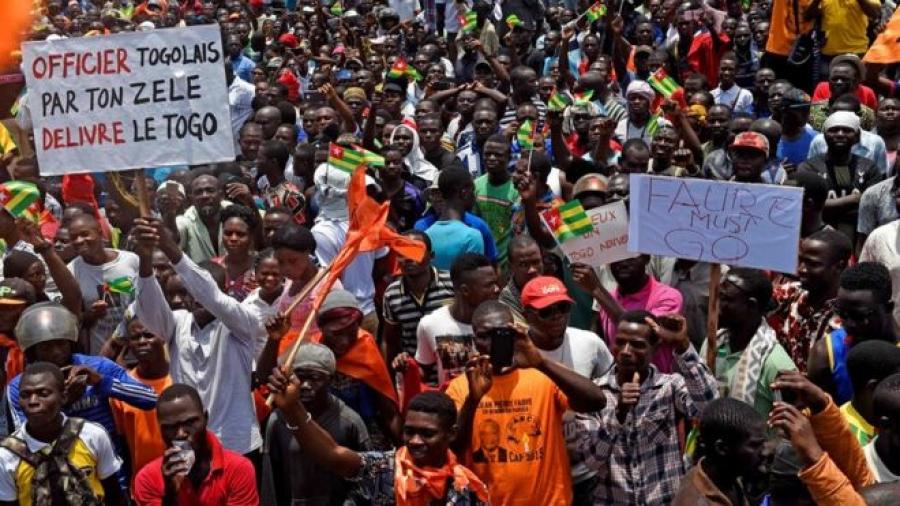 Protesters in Togo have been taking the streets in almost weekly marches since August 2017.

For Togolese protesters, the 1 February announcement that a dialogue was to be held between the ruling party and opposition came as a surprise. As they were gearing up for another round of rallies, reactions ranged from incredulity to anger.

There was also plenty of confusion. The news that talks were to begin on 15 February was delivered via a communiqué jointly signed by mediators from Ghana and Guinea. But to some, the declaration sounded less like an agreement and more like it was summoning the opposition to participate by fixing a start date.

The release also left it unclear who would be taking part in the dialogue and what would be on the agenda. Moreover, its claim that the leaders of 14 opposition parties had agreed to “suspend” public protests in the run-up to the talks struck some as questionable. Indeed, despite the communiqué, opposition leaders did not call for an end to demonstrations, and the protests scheduled for 3 February went ahead as originally planned.

Togo has been in political crisis since August 2017 when protests erupted across the country. In huge numbers, citizens demanded political reforms that include limiting presidential terms, reinstating a two-round election system, and allowing the Togolese diaspora a vote. Since then, protests have happened almost every week, with many escalating their demands and calling for the president to simply step down. The embattled Faure Gnassingbé has been in power since 2005 when he took over from his father who had been president since 1967.

Most rallies have led to some clashes with security forces and at least nine people have been killed. Many more have been arrested, and the opposition has made the release of these prisoners a precondition to any negotiations. The recent announcement of a dialogue did not meet this requirement, but said that the question of detainees would be at the top of the agenda.

So far, opposition leaders have remained tight-lipped about these proposed talks, but signs suggest that they plan to attend. If they do, they will be on familiar ground with familiar faces. Since 1991, there have been more than two dozen discussions, talks and agreements between the ruling party and the opposition. But these have led to little change.

Despite officially becoming an electoral democracy in the early-1990s, Togo has never had a democratic transition of power. Meanwhile, over the years, the ruling party has managed to dial back any democratic gains that were established by the 1992 constitution, a popular document that was approved by 99% of voters in a referendum.

This consolidation of power has included the unilateral removal of presidential term limits in 2002. This means that Gnassingbé, currently serving his third term, is constitutionally allowed to stay in office so long as he continues to win elections. Given his stronghold over the army, economy and electoral system, the prospects of him holding free and fair polls and of risking losing at the ballot box are slim.

This is partly why the rallying cry of Togolese protesters braving the ire of security forces week after week is now that “Faure Must Go”. The goal is to force President Gnassingbé from office or, in the worst-case scenario, deny him a fourth term after his current one expires in 2020.

A defiant Faure, however, has refused to entertain any such demands. In fact, speaking to Jeune Afrique in a rare interview since the start of the protests, the president notably left open the possibility of him running for a fourth time.

It remains to be seen which of these issues will be on the table in the 15 February talks. But – along with the ruling party, opposition and mediators – one powerful protagonist that might have a say over the agenda is the Tologese army.

Although it has remained quiet and not been talked about much since the start of the crisis, the country’s military commands a lot of influence. The army first installed Gnassingbé in 2005, hours after his father’s death. It played a crucial role in controlling the fraudulent elections soon after. And it brutally suppressed protests that followed, killing over 800 people. Several military figures now hold public office, sit on the board of state-owned companies, have been appointed to run municipalities, or are stakeholders in private businesses.

The question of who really holds the power in Togo is debatable. But it is clear that Gnassingbé, the ruling Union for the Republic (UNIR), and military elites are all jointly invested in keeping the president in power. The losers in this are the Togolese people yearning for freedom and democracy.

This status quo is likely to continue despite the upcoming dialogue, which will see the recycling of a model of conflict resolution that has so far proven barren on Togolese soil. In fact, the current crisis can be seen as stemming from the president’s previous failure to implement provisions agreed to in the 2006 Comprehensive Political Agreement.

Rather than leading to meaningful change, the negotiations may simply offer the government a much-needed reprieve from social unrest during which it to regain control. For about six months now, protesters have shown few signs of letting up and have been joined by teachers, health workers, students and more. What began as a political outcry, has now gained steam with social grievances.

A week ahead of the talks, the demands of different groups in the country are highly divergent.

On one side, the ruling party is shaken by the turmoil, but not yet panicking and still strong. In this, it is backed by the powerful army, which remains unapologetic about its intrusion in political affairs and is unwavering in its support of the regime.

On the other side, the coalition of 14 opposition parties is also holding firm in its demands of wide-ranging political reform. This group is managing to present a unified front, disproving critics that bet against their ability to work together. Togolese civil society is also slowly coming together now – overcoming years of disorganisation, limited resources, and in the face of merciless repression – to provide a meaningful alternative to mainstream politics. This latter group, if given the opportunity may hold the key to completing Togo’s quarter-century-long tumultuous journey to democracy.

The attendees, agenda, and likelihood of any kind of compromise being struck between these opposing groups will become clearer on 15 February. However, one thing that is already clear is that most Togolese are simply fed up with the government and want to see the end to 51 years of rule by a single family.

The state’s one-sided narrative has not just shattered Ethiopians’ shared understanding of reality but eroded the social fabric that held us together. I grew up in the 1980s in Asmara, ...
By continuing to browse this site, you agree to our use of cookies.