Cambridge Analytica, Jacob Zuma, the arms trade, and the resignation of Africa’s only female head of state.

Welcome to the 2nd free edition of African Arguments’ Insiders’ Newsletter! And a special thank you for all those who already subscribed to our paid editions, which will start next week.

If you want to continue to receive the Insider’s Newsletter and haven’t subscribed yet, you can click here to get 10% off on the regular subscription fees. Please consider choosing the “supporter’s” subscription, which will make additional funds available for African Arguments to commission in-depth pieces on African politics, which are published free for the world to read.

Kenya’s 2017 election was absolutely awash with fake news and propaganda. 90% of citizens reported seeing or hearing false reports around the poll. Doctored pictures of newspapers, fake news videos and wholly fraudulent websites were created to spread lies. And suspicious attack ads for which no-one wanted to claim responsibility reached millions of people.

In an undercover investigation by the UK’s Channel 4, Cambridge Analytica’s executives are seen discussing these kinds of methods as they claim to have overseen “just about every element of [President Uhuru Kenyatta’s] campaign” in 2017.

“We have rebranded the entire party twice, written the manifesto, done two rounds of 50,000 surveys…We’d write all the speeches and we’d stage the whole thing.” – CA’s Managing Director Mark Turnbull.

CA has gained notoriety for its possible role in manipulating social media to swing the Brexit referendum and US 2016 presidential elections. Its parent company was also involved in voter turnout suppression in Nigeria, according to The Guardian.

For anyone who’s been sent stories over whatsapp warning about plastic rice or “proving” that Nigeria’s President Buhari is really a clone from Sudan, it may come as little surprise that fake news stories travel faster and reach more people than real stories worldwide. This is the fertile soil in which false rumours sprout into genuine fears and beliefs.

Kenya appears to have been the testing ground for many of CA’s experiments, and it may now be at the frontline in combating this situation too. Campaigners, with support from the US, have launched a project to promote “media literacy” under the banner of #StopReflectVerify. If Kenyan activists gets a handle on this issue, one hopes they’ll help the rest of the world next. While months of painstaking journalism may take Cambridge Analytica down, it will take much more to address this broader environment.

As for the involvement of Cambridge Analytica in African elections, the current revelations may only be the start. US and UK lawmakers have announced probes into the activities of the company and, combined with increasing scrutiny and regulation of social media platforms, this might be the first of many stories on voter manipulation in African elections. We’ll follow this developing story closely and give you updates as more details emerge.

II) Jacob Zuma gets his day in court

Jacob Zuma is going on trial, and he might not be the only one.

The former South African president faces 16 charges related to 783 instances of wrongdoing. They stem from bribes he allegedly accepted as part of an arms deal in the 1990s. Prosecutors had dropped the charges months before Zuma became president in 2009. They resurfaced just weeks after he was forced from office last month.

This is a fraught moment, not just for Zuma, who is looking at significant jail time if convicted, but also for the ANC party that he led for almost a decade before it turned on him. The ANC still dominates South African politics, but it has been losing popularity, and Zuma could wreak further havoc on it if he so chooses. He is not the only person implicated in the arms deal and there are other skeletons he could unearth.

In the weeks after his forced resignation, ANC officials seemed to understand they couldn’t just freeze Zuma out. The former president does not want to leave politics, he retains some popularity in parts of the electorate, and he is still associated with the party in the minds of many voters. Just a month after stepping down, Zuma was back on the ground, recruiting voters as part of an ANC registration campaign.

The charges against him introduce new considerations for ANC leaders. Will the former president see his popularity evaporate in the midst of a trial? And, if so, who else can he bring down with him?

At the moment, the ANC is clinging desperately to a middle path, arguing that prosecutors should be allowed to continue their investigations, but reminding people that Zuma is innocent until proven guilty. That ground is already eroding under their feet.

The Stockholm International Peace Research Institute published its yearly overview of the international arms market and on the face of it, it looks good for Africa. According to SIPRI’s data, the continent imported 22% less major weapon systems like tanks, airplanes and artillery in 2013-2017 than it did in 2008-2012.

However, this masks a few important developments. First of all, SIPRI includes Egypt in its Middle Eastern basket of countries. If it was included in Africa, the continent would have seen a 23% increase of arms imports over the last 10 years. Because of a spending spree following the 2013 coup, Egypt’s arms imports triped from one period to the next.

That one country can move the average by such an extent shows that the trade of major weapons system is an elite game that few countries in Africa want or can afford to take part in.

Looking at the last 5 years, only 5 African countries imported 85% of the continents heavy weapons: Egypt, Algeria, Sudan, Nigeria and Angola. While 4 of these faced significant domestic terrorism or full-blown civil war, Angola being the exception, this is unlikely to be the reason for their military spending sprees; they are hardly the only countries in Africa that face these problems. Rather, the list seems to correspond to countries that: a) have a source of funding independent from citizen control – for Algeria, Nigeria and Angola this is oil or natural gas, while Egypt receives billions in US military aid and Sudan plunders its own country unabashedly; and b) have governments that are heavily influenced by or rely on the military for political legitimacy and power.

Countries like South Sudan, Chad or Central African Republic have their own conflicts, but either don’t have or don’t want to spend money on tanks and planes. They rely more on light weapons like assault rifles and machine guns, which are harder to track and are not included in SIPRI’s data. In other places, the military is perceived by the ruling elite as a potential threat, which has to be kept on a shoestring budget and not pampered with expensive toys.

Africa’s only female head of state resigns amid scandal

The President of Mauritius Ameenah Gurib-Fakim – Africa’s only female head of state – announced her resignation this week following accusations of credit card impropriety. She is accused of spending $26,000 on jewellery and clothing using a credit card provided by an NGO founded by an Angolan businessman who, himself, was under investigation for fraud.

A statement from Gurib-Fakim’s office argued that she had inadvertently used a credit card provided by the Planet Earth Institute because she had a similar card from the same bank and that she had reimbursed the money when the “error” was discovered. The presidency is more of a ceremonial post in Mauritius, with most of the political power resting with the prime minister.

Gurib-Fakim is one of only six women who have held the position of head of state or government in Africa. Apart from Ellen Johnson-Sirleaf (Liberia) and Joyce Banda (Malawi) the other four have been in an acting capacity, sometimes of a few months, weeks or even hours.

The circumstances under which a woman ascends to powerful positions – and leaves it – are myriad, but there are some common threads. Often, prolonged political and civil crises elevate women into positions that were otherwise closed to them. Rwanda is a good example, where men were disproportionately killed in the 1994 genocide and civil war. By the time the conflict ended, women were 70% of the population. Faced with a new demographic reality, the patriarchy had to adapt.

And in Samba-Panza’s, Rogombe’s, and Bellepeau’s cases, women are often tapped as “compromise” or “caretaker” leaders in the midst of political transitions (played out among men), or brought to pick up the pieces after men have caused a scandal.

Conversations on social media have made light of Gurib-Fakim’s resignation, with tongue-in-cheek suggestions that a “real” African president would never resign over “just” $26,000. More seriously, it is proper that financial impropriety should lead to a resignation. But we must not lose sight of the fact that the knives are very quick to come out for women presidents, while their male counterparts can often brush off similar allegations or see as self-evident their right to fight them while staying in power.

Don’t take it too literally 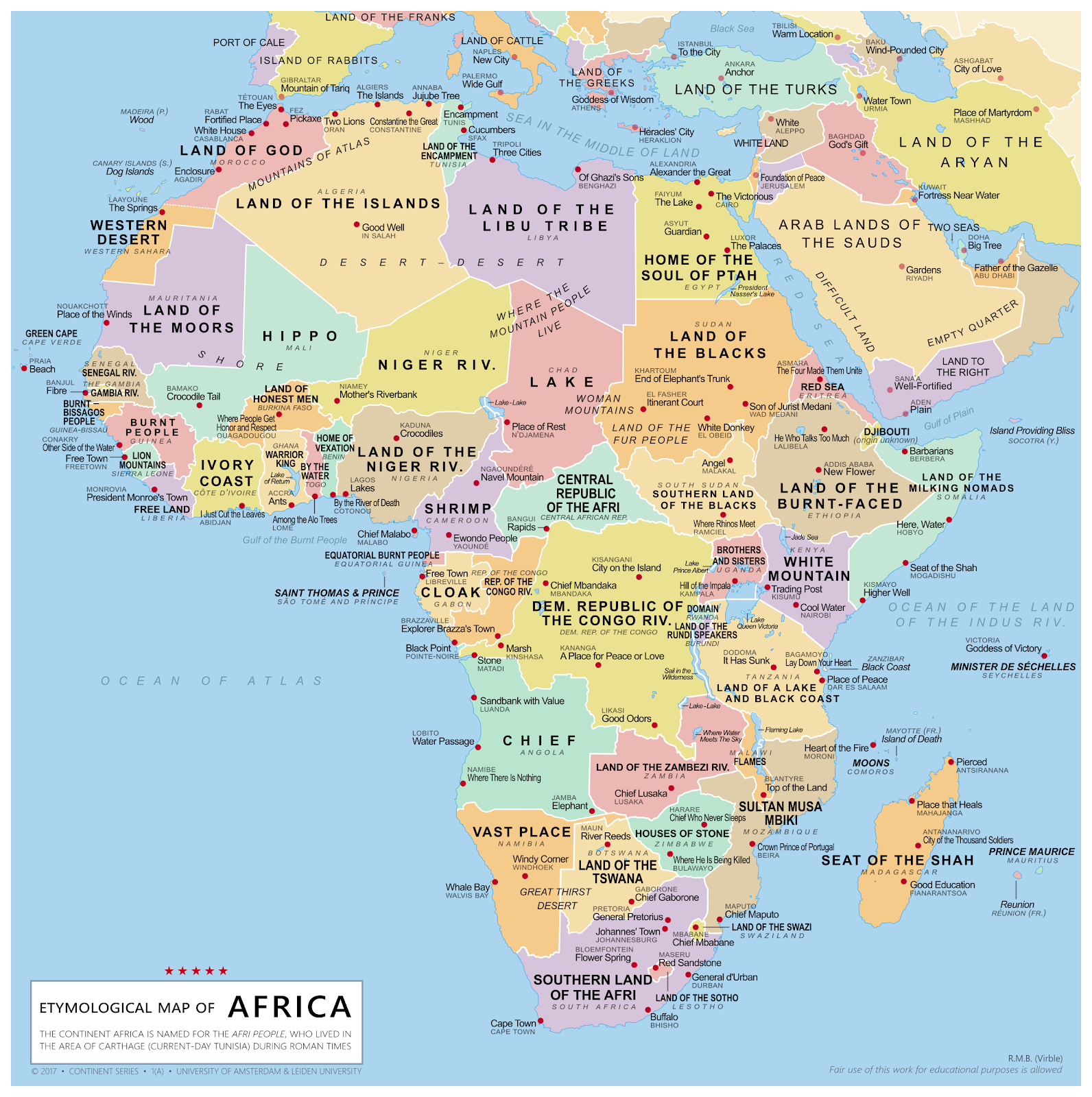 Another map of literal country name translations made the rounds on social media this week, but we like this one even better. While not as aesthetically pleasing as the one featured on kottke.org, this creation by an intereprid reddit user also has literal translations of many city and location names, in addition to countries. Particular gems are He Who Talks to Much (Lalibela, a city in Ethiopia), Where There is Nothing (the town of Namib in Angola) and Where Rhinos Meet (the location of South Sudan’s proposed future capital).

It will surprise no one that the names chosen by early European adventurers and colonial administrators are among the less imaginative ones or speak of grandiose misunderstandings. Everyone is welcome to guess how the Lake Lake (Lake Chad) got its current name (“do people not have lakes where this white person is coming from?”).

Beyond that not too much should be read into this map. Place names everywhere are a mixture of the mundane and poetic. But I’d love to know a few more of the stories behind some of the names on the map.

Our zombie elite, united only in greed, has ensured that it remains the main cast. Their whims and fights steal newspaper acreage from the people. It is not just about publicity; it is part of their innate desire to live forever.https://t.co/ndu8u6DXAO

Uhuru Kenyatta and Raila Odinga have found common ground again, but that hardly solves all of Kenya’s political problems. This tweet is best read in the context of the piece it links to, a no-holds barred reckoning with Kenya’s political elite by @Owaahh. Just a short taste:

“The way the state speaks with those it governs has barely evolved over the last six decades […] In many ways, the last decade has felt like a marathon through the first 30 years after independence. The son wants to eradicate the same things that his father promised to focus on 55 years ago. Detention without trial is back. We have launched wars on human rights, a new constitution, devolution, and Somalia. The concerted effort to reset to the KANU code is in full gear. We are back to essentially a one-party state with a growing greed and hold on all arms of government. We have the makings of a Sun King who can do no wrong, and in whose wisdom and undying love for our wellbeing we must trust.”