If today’s vote goes President Nkurunziza’s way – as it almost certainly will – more of Burundi’s hard-won democratic freedoms will be sacrificed. 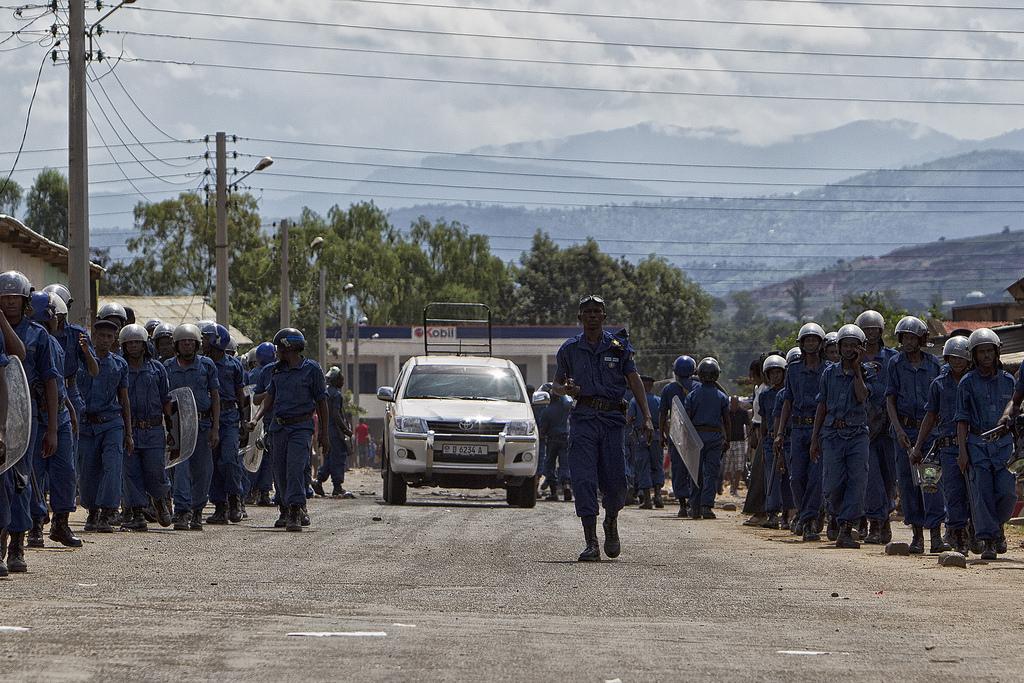 When President Pierre Nkurunziza decided to run for a third term in 2015, it led to widespread protests. Credit: Igor Rugwiza.

The citizens of Burundi votes today in a controversial referendum. The vote is likely to result in constitutional amendments that will consolidate the dominance of the ruling CNDD-FDD party.

This is a decisive moment in the country’s history. It may prove to be the final nail in the coffin of the Arusha Accords of 2000, which led to the constitution being ratified in 2005. And it may lead the country further down the path of authoritarianism.

The upcoming poll will, among other things, ask Burundians to vote on whether the president’s term should be extended from five years to seven. This could allow President Pierre Nkurunziza, who has been in power since 2005, to rule for another 14 years when his term expires in 2020.

If the referendum goes his way, it will also be a further blow to ordinary Burundians, who live in a state of hardship and adversity. Nearly half a million people have fled the country since 2015 and are now living as refugees in neighbouring countries. Food insecurity is rampant.

The ruling party tried to amend the constitution in a similar fashion in 2014. That was a bid to constitutionally allow Nkurunziza to run for a third term. The attempt failed to gain the necessary support in parliament.

The party’s decision to select Nkurunziza as their candidate in the 2015 elections anyway was followed by mass protests and demonstrations. Such resistance is unlikely this time around, partly because of the crisis that followed: a trail of assassinations, arbitrary detentions, enforced disappearances, torture and sexual violence against those who raised their voices in opposition.

Nkurunziza has been remarkably successful in neutralising internal opposition during his years in power. He’s also withstood pressure from the region and the international community. Meanwhile, he has gradually undermined the very foundation for the peace that allowed him to lay down his gun and get elected in the first place: the Arusha peace agreement.

That deal led to Burundi’s 2005 constitution, which was crafted to enable power-sharing between the country’s main ethnic groups, the majority Hutu, and minority Tutsi and Twa. This followed a history of ethnicised political conflict and civil war.

Today’s referendum represents a dismantling of the core principles agreed in the peace accords.

The build-up to the referendum has offered ample proof of Burundi’s degrading democracy. The campaigns for the referendum have included divisive language and hate speech – this in a country that has experienced cycles of ethnically framed civil war and mass atrocity.

The ruling party and its youth wing, the Imbonerakure, have used violence to threaten and intimidate opponents of the referendum.

The government recently banned the international and national free press, including the BBC and the Voice of America.

And if constitutional amendments go ahead as proposed, there will be a further reversal of Burundi’s democratic gains. As scholar Stef Vandeginste has noted, the constitutional reforms do not create a complete upturning of the previous balance of power between Hutu and Tutsi. However, they do cement the power of Nkurunziza’s ruling party through a virtual “one-party system”.

Burundi isn’t the only state in Africa, or more broadly in the world, to push through constitutional amendments recently. Uganda’s Yoweri Museveni passed amendments removing term limits in 2006 and age limits in 2017. Rwanda’s Paul Kagame scrapped presidential limits in 2015. China’s Xi Jinping did the same this March.

The relative calm on the surface of Uganda and Rwanda may lend itself to an international agenda of weighing short-term stability over political participation and human rights. It may tempt the idea that strongmen who serve as presidents for life are simply part of a patrimonialist tradition specific to African democracy.

For Museveni and Kagame, however, the costs of imposing their rule have been relatively low. They have not had a sizeable minority against them. They have remained strong military rulers under a light coating of civilian governance. Their authoritarianism can hold without too much exercise of widespread abuses and atrocities, which gives the impression of stability – at least to observers intent on not looking too closely.

Nkurunziza is in a different position. His ruling party has had to share power with others. It is historically riven with internal divisions, as the recent armed conflict and failed coup d’état in 2015 reveal. He is not a classical founding father, but an everyman who must contend with other leaders in the party and opposition, with their own sectarian politics, constituents, and charismatic personas.

Nkurunziza’s advance toward a presidency that could become a lifelong rule is worrying. If today’s referendum goes his way – and it almost certainly will – more of Burundi’s hard-won democratic freedoms will most likely be sacrificed.