Just like the colonists gave way to independence, and the military gave way to civil rule, the current system can also give way to true democracy. 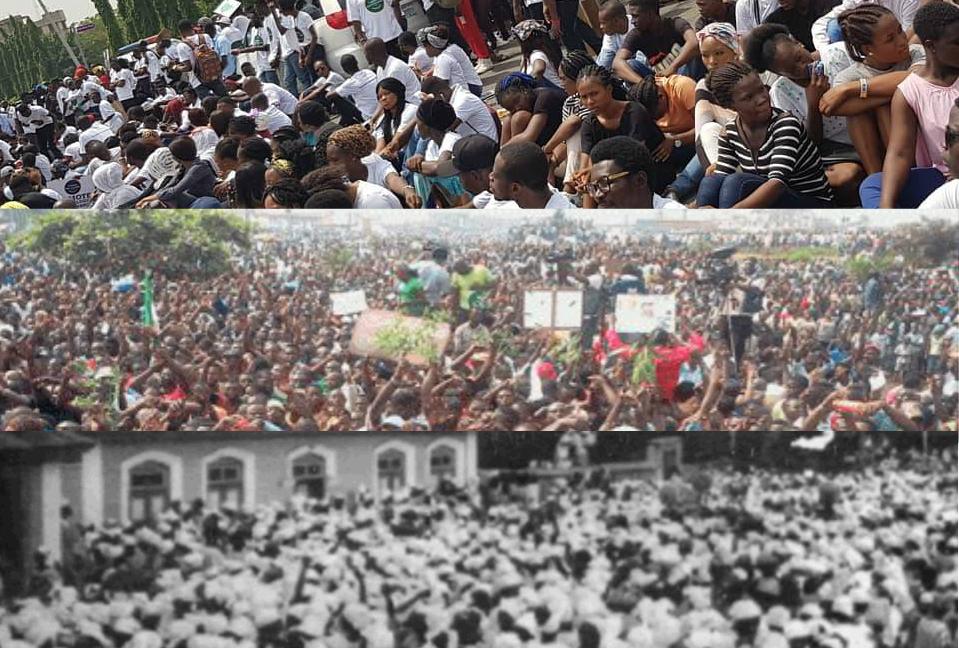 Transitions of power at the ballot box have not changed Nigeria, but large-scale mobilisations have and can again.

In just a couple of weeks, Nigerians will get to vote for their president. On 16 February, the people will have a choice between 72 candidates – though in another sense, they will have no choice at all.

The only two nominees with a realistic chance are President Muhammadu Buhari and former vice-president Atiku Abubakar. They come from contesting parties – the ruling All Progressives Congress (APC) and main opposition People’s Democratic Party (PDP) respectively – but both symbolise the continuation of the same elite-dominated system that has plagued Nigeria for decades.

Nigeria’s political elite is currently made up of four broad categories: 1) the royal families of Nigeria’s constituent ethnicities; 2) the early-independence “nationalists”, who inherited state power and economic industries from the colonial government, and their descendants; 3) the military generals that once ruled the country and their families; and 4) leading businesspeople and politicians who aligned with the other groups along the way. All these groups thrive on the dysfunction of Nigeria’s political system and secure economic power through their proximity to state power.

The current elitist structures are built on those left behind by Nigeria’s former colonial rulers. That system was designed to exploit and expropriate local resources. Little has changed since. As political scientist Claude Ake remarked in 1981, the Nigerian state was created to “intervene everywhere and to own virtually everything”. This fact inevitably leads to a “desperate struggle to win control of state power” among politicians since, as Ake summarised, control of the state means “being all powerful and owning everything”.

The Nigerian state today is ever more centralised. The country is divided into administrative provinces, but they have little autonomy and most depend on the centre for funding. The military governments that designed this structure termed it “federal” and called the provinces “states”, but these labels are misleading. The semi-permanent deployment of military units across the country served – and continues to serve – as a brutal check against agitations for a truly federal structure, greater autonomy, self-determination or secession. Moreover, as the central government has become even more powerful over the decades – including through its control of oil and other resources – the elite has reinforced its dominance. The president today holds fantastic discretionary powers including, for example, the personal authority to exempt any company or person from any form of taxation.

For all the rhetoric about governance and public service, elections in Nigeria are about access to these powers. In this system, moneyed elites – aware that economic profit derives from their proximity to the centre – fund parties and candidates that demonstrate loyalty to the political system as it is. Economic control ensures political power, and political power ensures economic control, bypassing ordinary people and the grassroots.

The result is a continuing deterioration in public utilities and infrastructure, and a decline in the quality of governance. Despite the presidency changing hands in 2007, 2010 and 2015, the last two decades have seen an increase in regressive policies, autocracy, corruption, and the subordination of state organs to elite interests. Transitions of government have merely marked shifts in the particular elite faction at the top. They have not meant meaningful changes of policy or the political system.

The “choice” at the ballot box

In the upcoming election, President Buhari and his main challenger Atiku are supported by different elite groupings, but remain united in principle.  The two frontrunners have far more in common with each other than the Nigerians they seek to govern. In fact, in the last elections, Atiku campaigned for and financed the campaign of the very man he now seeks to displace.

Yet despite everything, most Nigerians will vote for one of these two men in a couple of weeks. This is principally because the structure of the state and its influence on the economy has placed majority of Nigerians under the economic benevolence and patronage of the elite. In a country where up to 70% of the population live in poverty, most people will vote for the party that promises the most immediate economic inducements or provides the most credible threats.

In Nigeria, only those willing to fight in the worst possible ways can win. Across the country, leading contenders rely on the blessings of the patronage system, control of a “war chest” often financed by state funds, the deployment of violence by state and non-state actors, and the manipulation of votes and voters. The odds of any of the candidates from outside the political class winning are negligible.

Under these conditions, it may seem like the only realistic option for politically-conscious citizens is political apathy. But there is an alternative. While elections may not bring about the kind of democratic reforms needed to harness the country’s potentials, an organised mass movement demanding a transformative constitutional process could provide a way forward.

This kind of movement will require consensus-building rather than partisan splits. It will demand cooperation between ordinary people across all sectors of the economy, across ethnic and religious divisions, and irrespective of current party lines. Such a movement will have to focus on a constitutional-level renegotiation of the terms of Nigeria’s existence, the relationship between the state and the people, the control of land and resources, and the treatment of ethnic, religious, and other minorities. It will be a movement to define governance; not one that merely seeks to change government.

Certainly, the current political elite will not stand by and watch. They will ignore the demands at first. Then, they will try to dismiss its potential for change and suggest other short-term fixes. If the movement keeps growing, they will next try to manipulate its agenda and put forward their own interests. However, as more Nigerians become aware and conscious of the need for such a national movement, the political elite become less able to ignore, dismiss, or manipulate its demands.

The recent emergence of the so-called “third force” parties in Nigeria may signal an increasing restlessness with the existing political system. But thus far, these minor parties have only succeeded in dividing those who oppose elite interests into partisan factions. They are merely a precursor to an actual movement when what is required is a non-partisan ideological movement for systemic and structural reforms.

Unfortunately, it may take a few more electoral cycles before most voters realise the futility of partisan politics in a system violently controlled by an elite class. For now, most of us are still caught between hope and despair in the electoral process. As long as this is the case – and until we unite to consistently agitate for a transformative constitution – the interests of us ordinary Nigerians will continue to be subordinated to the political elite regardless of the outcome of elections.