Tanzania’s stance on Palestine suggests its history of fighting global injustice could be making way for a more pragmatic “economic diplomacy”. 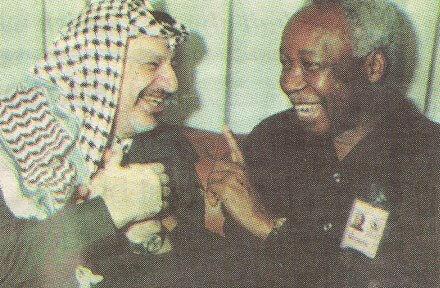 In November 2018, representatives of liberation movements from across southern Africa gathered for a reunion in Namibia’s capital Windhoek. The meeting brought together the secretaries of six former national movements that are now their nation’s ruling parties – SWAPO from Namibia, the ANC from South Africa, FRELIMO from Mozambique, the MPLA from Angola, the ZANU-PF from Zimbabwe, and Chama Cha Mapinduzi (CCM) from Tanzania.

For CCM (which was previously TANU before its merger with its counterpart in Zanzibar in 1977), membership of this group retains a special significance. Under independence leader Julius Nyerere, the party gave unwavering support to these fellow movements. It allowed them to set up training camps, provided material and logistical support, and expressed diplomatic solidarity with them in international fora.

Tanganyika (and later Tanzania), however, did not just welcome those fleeing occupation, apartheid and colonialism in Africa. It extended this comradeship to the likes of the Tupamaros of Uruguay and liberation fighters from Palestine. In fact, Nyerere was among the first African leaders to recognise the Palestine Liberation Organisation (PLO) under Yasser Arafat and, in 1973, Dar es Salaam became home to the first PLO embassy in Africa.

“Our generation was a generation of nationalist struggle for the independence of our own countries …but the plight of the Palestinians is very different and much worse,” said Nyerere. “They have been deprived of their own country, they are a nation without a land of their own. They therefore deserve the support of Tanzania and the entire world.”

It was within this context that the November gathering in Windhoek reiterated its support for the people of Palestine in their struggle for self-determination – at least for the most part. The CCM representative reportedly raised concerns at this declaration, with the write-up of the event recording that: “The reservation by CCM was noted”.

Why was the CCM – whose international relations are supposedly guided by Nyerere’s mantra that “freedom is indivisible; it is either everywhere or it is nowhere” – expressing reservations about standing in solidarity with Palestinians? Has Tanzania deviated from Nyerere’s legacy?

The government’s actions last year seem to suggest so. On 14 May, Israeli forces killed over 60 Palestinian protesters in Gaza as the US embassy was about to be transferred from Tel Aviv to Jerusalem. It was originally reported that Tanzanian representatives attended the US embassy’s controversial inauguration as the bodies piled up, defying the African Union’s position, but the government later denied it had been present.  Nonetheless, many in Tanzania were dismayed that their government failed to condemn the killings and, soon after, opened its own embassy in Tel Aviv.

When questioned about this at a parliamentary debate, Foreign Affairs Minister Augustine Mahiga insisted that the government’s position on Palestine had not changed. However, he has also emphasised the need for Tanzania to embark on “economic diplomacy” to create relationships with partners who will support the country’s industrialisation strategy.

It seems that Tanzania regards Israel as one of those key potential partners. Less than a month before the Gaza massacre, the Tanzania-Israel Business and Investment Forum (TIBIF) took place in Dar es Salaam, bringing together investors, entrepreneurs, government officials and private sector executives. President John Magufuli has also publicly hailed Israeli support in investments, security and healthcare in Tanzania.

This may be positive for Tanzania’s economic plans, but is the price tag attached to these projects diplomatic support for Israel? Over 50 years ago, Nyerere spoke of forming friendships with other nations, but crucially warned against trying to “buy that friendship with silence on the great issues of world peace and justice”. Is Israel trying to buy Tanzania’s silence as Nyerere cautioned?

“We are not asking you for anything special”

Tanzania, once a staunch supporter of the Palestinian cause, must not allow itself to be quietened by its relationship with Israel, which is embarking on a diplomatic and economic push in Africa. Palestinians have been occupied for half a century. We are trapped in a non-state with no rights, land or citizenship. Israel has been able deepen and entrench this occupation because the world refuses to take effective action.

Tanzania was part of a group of frontline states that formed the backbone of resistance to apartheid in South Africa. Nyerere was among those that launched the global anti-apartheid movement in 1959 in London when he said: “We are not asking [you] for anything special. We are just asking you to withdraw your support from Apartheid by not buying South African goods.”

If he were alive today, there is no doubt that he would have supported Palestinians’ struggle and the Boycott, Divestment and Sanctions (BDS) Movement against Israel, just as he did with apartheid South Africa.

We Palestinians are inspired by Tanzania’s liberation struggle and its former leaders. We are determined as ever to achieve our freedom, just as they did. Tanzania’s solidarity – along with the rest of Africa – is a vital pillar in our own struggle against occupation. As such, we urge Tanzania not to veer from Nyerere’s legacy of fighting for global justice.

Dr Mohammad Makram Balawi is a Palestinian writer and academic based in Istanbul, with a special interest in international affairs.