Makoma Lekalakala says the campaign against nuclear is ongoing and that water may be the next front in South Africa’s environmental struggle. 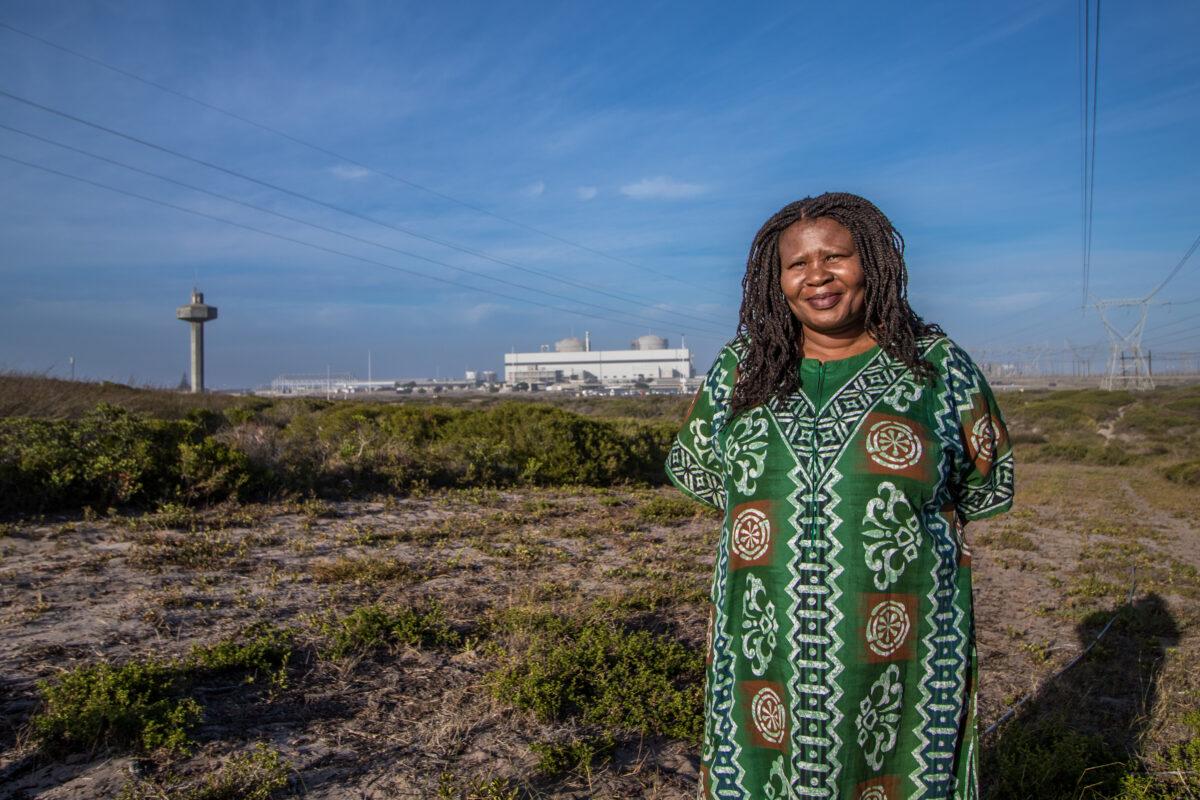 As Makoma Lekalakala leads us to a meeting room on this cloudy Wednesday in Johannesburg, it looks like the demands of the week may have taken their toll on her. It has been a busy few days for the tireless environmental activist.

The moment she starts talking, however, the 54-year-old becomes a typhoon of energy. There are too many important environmental fights to be fought, even if doing so comes with uncertainty and dangers.

“Everywhere you raise issues that are uncomfortable to those who benefit from them, it always becomes rough,” she says.

Lekalakala is no stranger to standing up to those in power. The activist grew up in Soweto under apartheid and joined the liberation struggle as a young woman. In 2008, she joined Earthlife and turned her attention to environmental justice. The NGO’s work has never been more urgent. The effects of climate change are increasingly being felt across the world and, according to a huge UN report last year, there are only 12 years left to avoid a catastrophe.

Lekalakala therefore advocates on widespread issues in South Africa, from pollution to water scarcity. The achievement for which she is best known, however, was stopping the construction of eight to ten nuclear power stations in 2017.

This victory was the result of years-long campaigning. In 2014, Lekalakala along with fellow activist Liz McDaid began challenging a secretive deal the South African government had struck with Russia during President Jacob Zuma’s administration. The arrangement, reportedly worth $76 billion, involved building several nuclear power plants to generate around 9.6 GW of energy in a country where power cuts are part of daily life.

The activists believed the nuclear stations would cause significant environmental damage by raising the temperature of the ocean in Port Elizabeth, where the first new nuclear station was proposed to be built, harming marine life and jeopardising the livelihood of small-scale fishermen. They organised public rallies across the country before taking it to court.

“We knew that most of the regulation and constitutional rules had not been followed so we raised a case based on legislative and regulatory issues to stop them,” says Lekalakala. “The case was not about technology, nor even on environmental issues. The case was much more about the legislative framework.”

While up against the government, both women were threatened and suffered break-ins in which their laptops were stolen. Ultimately, however, they were successful. The Western Cape High Court, which heard the case, struck down the deal.

In recognition of their efforts Lekalakala and McDaid were awarded the prestigious Goldman Environmental Prize, which “honours grassroots environmental heroes…for sustained and significant efforts to protect and enhance the natural environment, often at great personal risk.”

“Nuclear energy is not climate neutral”

Stopping the secretive nuclear deal was a significant victory for environmentalists in South Africa, but Lekalakala points out that it was only a temporary reprieve. The South African government has not ruled out returning to the project in the future, while Rosatom, the Russian State Atomiс Energy Corporation, is in talks with up to eleven other African countries about developing civil nuclear programmes. Those who have already signed agreements include Ethiopia, Sudan, Kenya, Uganda, Rwanda, Zambia and Ghana. In 2017, Nigeria signed up to a deal reportedly worth $20 billion with Russia to build two nuclear stations.

“Some governments signed the agreements thanks to the lack of transparency,” says Lekalakala. “We know that civil society organisations in Nigeria, Kenya, Egypt or Zambia are saying ‘no’ to nuclear energy and they are going to oppose any plan. We have shared a lot of information about our case with them.”

Lekalakala recognises the need to generate much more electricity across most of Africa. But she argues that nuclear energy brings with it many environmental problems from the dangerous nuclear waste produced, to the radiation emitted by reactors, to the CO2 released in the mining of uranium. She also believes it is unnecessary.

“The continent has got unexploited renewable energy sources like solar, so why go nuclear?” she asks. “Nuclear energy is not climate neutral.”

Lekalakala maintains that there are better alternatives, which would be more efficient, renewable and decentralised. The International Energy Agency echoes this. It predicts that 315 million people in rural areas will gain access to electricity by 2040 with most of this new electricity coming from the development of mini-grids and off-grid systems.

“People should be given a chance to generate electricity on their own, for example, through cooperatives or off-grid connections”, she says. The surplus could be sold to the grid making a new income for families.

“Water is going to be very expensive”

For Lekalakala, the struggle against environmentally damaging power stations is ongoing. But she also warns against similar battles being waged over related issues with similar strategies being deployed.

Lekalakala believes that widespread power cuts in 2007 and 2008 were a ploy to persuade the public that more power stations were necessary.

“It was a tactic used by the government to lead people to say ‘we need more power stations’. That was how the new plants were built, guiding the public opinion to say we need them”, she explains.

She now sees the same tactic being used around the issue of water. In 2018, Cape Town prepared for the ominously named “Day Zero” when the taps would have to be turned off due to water scarcity. That crisis was averted, but Lekalakala believes the fears created around the event may be exploited by elites.

“We don’t have water, what can we do? Let’s take the desalination plants,” she says.

Lekalakala claims there are political and economic groups that want to push desalination plants on Cape Town even though the technology is expensive, carbon-intensive, requires huge investment and will likely drive up the cost of water. Cape Town already has three desalination plants and plans to get 25% of all its water from such sources by 2020. The municipality pays R39 ($2.62) per kilolitre of desalinated water, while getting the same amount of dam water to taps cost about R5 ($0.34).

“Like any other mega infrastructures, they start small but as time goes on, the expenses double or triple,” she says. “As a consequence, water is going to be very expensive. It will be the new commodity in the economic segregation that runs today’s South Africa.”

“Most of the time it is the women”

For Lekalakala, campaigns around nuclear power and water scarcity are crucial, but are just one part of the bigger picture. She believes that many issues are linked and part of environmental justice and climate change, even if those affected do not necessarily see it in those terms.

“People are not saying that the climate is changing, but they talk about how the rain is no longer coming, how the plants have a different colour,” she says. “All of them are environmental issues, but people all not calling them that. If you ask what is the main problem right now, people would not say it is climate change; they would say food insecurity. However, what causes food insecurity? It is linked to climate change.”

In that sense, Lekalakala sees many South Africans as environmental activists whether or not they identify as such. This is particularly true of women – and, in South Africa, particularly black women – who tend to be the most affected by environmental degradation. Part of Lekalakala’s current mission therefore is to get more women involved in policy decisions around energy and climate change.

When she joined EarthLife in 2008, she was one of only a few black woman in the organisation. Some progress has been made but there is a long way to go still, especially as the effects of climate change become more extreme and environmental justice concerns proliferate.

“Most of the time it is the women who raise environmental issues,” she says. “They are protectors. They do not want their families to be in difficult situations, so they want their people to live in environments which are not harmful. Most of them do not recognise that what they do is environmental activism.”