Cameroon’s three deepening divides all have one thing in common

The Anglophone conflict is not the only crisis facing Cameroon. 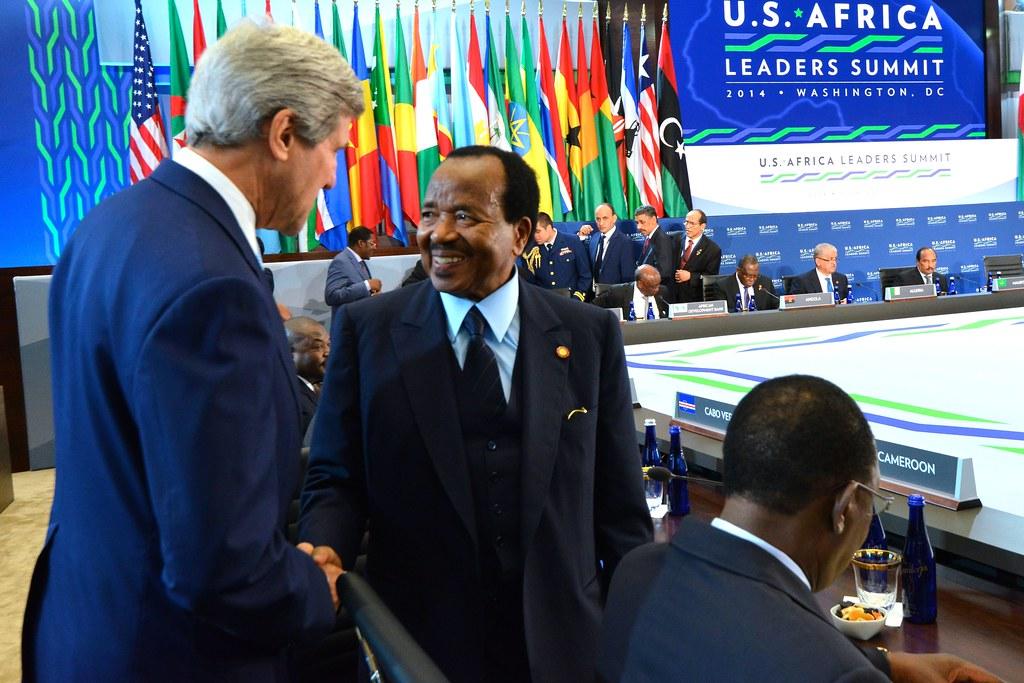 President Paul Biya, 86, has been in power since 1982. Credit: US State Department.

After 37 years under President Paul Biya, Cameroon is arguably at its most divided yet. Various of its fault lines are deep, and they are getting even deeper.

The most immediate crisis facing the country is the ongoing Anglophone conflict in the two English-speaking regions, which has led to hundreds of deaths. But this situation is compounded by two other tensions in Cameroon, one ethnic, one religious.

President Biya, in power since 1982, stands defiant in the face of these pressures, but without clear action to address them, these challenges will only become more threatening to his rule and to the country.

The Anglophone conflict began in 2016 when teachers and lawyers in Cameroon’s two English-speaking regions went on strike. They were protesting against the deployment of French-speaking judges and teachers with no understanding of the common law and educational systems that operate in these areas. The government seemed prepared to negotiate until more demonstrators joined and the group’s demands escalated into calls for more autonomy for the two regions. Anglophone nationalists have long demanded greater self-rule to address perceived marginalisation and protect their Anglo-Saxon heritage in the predominantly French-speaking country.

At this point, the government – as it has done many times in the past – resorted to force and mass arrests.  The situation quickly escalated. Armed groups emerged calling for the English-speaking regions to secede completely from Cameroon as the independent state of Ambazonia. Fighting ensued with both separatist forces and the Cameroonian army allegedly committing widespread atrocities.

Three years on, the government in Yaoundé remains adamant that Cameroon’s decentralised unitary form of state is non-negotiable. However, this position is becoming increasingly untenable.

To start with, some key western governments, who previously only called for dialogue, have begun to take some concrete and sustained steps in relation to the conflict. This February, for instance, the US scaled down its military assistance to Cameroon citing gross human rights violations. In May, it sponsored the first UN Security Council meeting on the Anglophone conflict. And then, in July, its House of Representatives adopted Resolution 358 in July calling on the Cameroon government to reconstitute the federal system as one measure to resolve the crisis. That same month, Switzerland, which has a federal system and is another key partner, announced that it is leading a mediation effort. It has reportedly been discretely pressing Biya to look at its own model of territorial state organisation .

At the same time, domestic opinion in Cameroon is also shifting. As the separatist conflict wears on, moderate Francophones are increasingly subscribing to the idea of a federal state, something, which moderate Anglophones have long called for.

Along with the Anglophone crisis, ethnic divides have also become more prominent in Cameroon, especially since the 2018 presidential elections. At the heart of these tensions are two groups’ competing claims to power.

The first, the Bamilieke, wield significant economic authority in Cameroon. Elites from this group control much of the economy and dominate the manufacturing industry. People from this ethnicity mostly occupy the west of Cameroon and have strong cultural ties to one of the Anglophone regions despite their Francophone colonial heritage.

The second, the Bulu-Beti axis, wield significant political power. Since Biya came to power, handpicked by Cameroon’s first president Amadou Ahidjo, elites from this group have seen themselves as the country’s natural rulers. The Beti and Bulu mostly reside in the centre and south regions.

The rivalry between the Bamilieke and Bulu-Beti axis came to a head in the run-up to the October 2018 presidential election in which President Biya ran for a seventh term against his main challenger Maurice Kamto, a Bamieleke. In the campaign, supporters of both sides engaged in inflammatory ethnic rhetoric, with the most xenophobic attacks coming from the Bulu-owned Vision4 Television.

In the end, Biya was declared the victor with 71.28%, but Kamto disputed the results, alleging widespread fraud. Tensions escalated, leading to some violent attacks on Cameroonian embassies in Berlin, Paris and elsewhere. Kamto, believed by many to have been the real winner of the polls, was arrested and remains incarcerated.

The government’s suppression of Kamto and his supporters mirrors its previous treatment of English-speakers. For example, the 2018 election followed a very similar pattern to that of 1992. In those polls, Biya’s main competitor was the Anglophone John Fru Ndi. That process was also marred by allegations of fraud and hate speech. In their aftermath, Biya placed Ndi, who is  believed to have won the polls, under house arrest after declaring a state of emergency in his Ndi’s native North West region. The resentment created at this time added to a growing sense of exclusion, contributing to sentiments led to today’s Anglophone crisis.

Given the shared experiences of the Bamieleke and Anglophones, as well as cultural similarities, one might expect these groups to form an alliance. In fact, a leaked US embassy cable from 2011 suggested some regime insiders were discussing, and dreading, the prospect of such an “Anglo-Bami alliance”. In reality, such an alliance could be struck but would probably be short-lived, focusing only on ending Bulu-Beti dominance. On more fundamental questions such as the organisation of the state, cleavages would likely to emerge. Consensus on these points would not be impossible, but four decades of respective rule under the British and French during colonialism instilled differences in perspective and politics between these groups that would hard to overcome.

3) A religious group in waiting

A final divide facing Biya’s Cameroon comes from predominantly Muslim northerners, who are reportedly vying for one of their own to take over the presidency after Biya. In a leaked cable from 2009, Amadou Ali, an influential northerner who previously served in senior ministerial positions, said as much to US diplomats. According to the cable, Ali predicted that Cameroon’s three northern regions “will support Biya for as long as he wants to be president…but would not accept a successor who was either another Beti/Bulu, or a member of the economically powerful Bamileke ethnic group”.

Like the Bulu-Beti axis, Muslim from the north also see themselves as the natural rulers of a country whose population is majority Christian. And, as Ali explained, they have no intention of sitting idly by and letting an individual from any other group succeed Biya.

Cameroon’s divides today are varied and complex, but have one thing in common: They want to see Biya go. This includes even the northerners, albeit with less urgency, who have been among the president’s closest collaborators and governed with him from day one.

So far, the common goal of removing Biya has not been sufficient to unite these various different groups or force change. But as Cameroon’s divides continue to deepen, the question remains of how much longer the 86-year-old president hold it all together.

A version of this article was first published on Al-Jazeera.

Yuhniwo Ngenge is a democracy, governance and human rights analyst. He writes in his personal capacity.