Kitenge is made in China, but sold, worn and inscribed with meaning in Kenya. 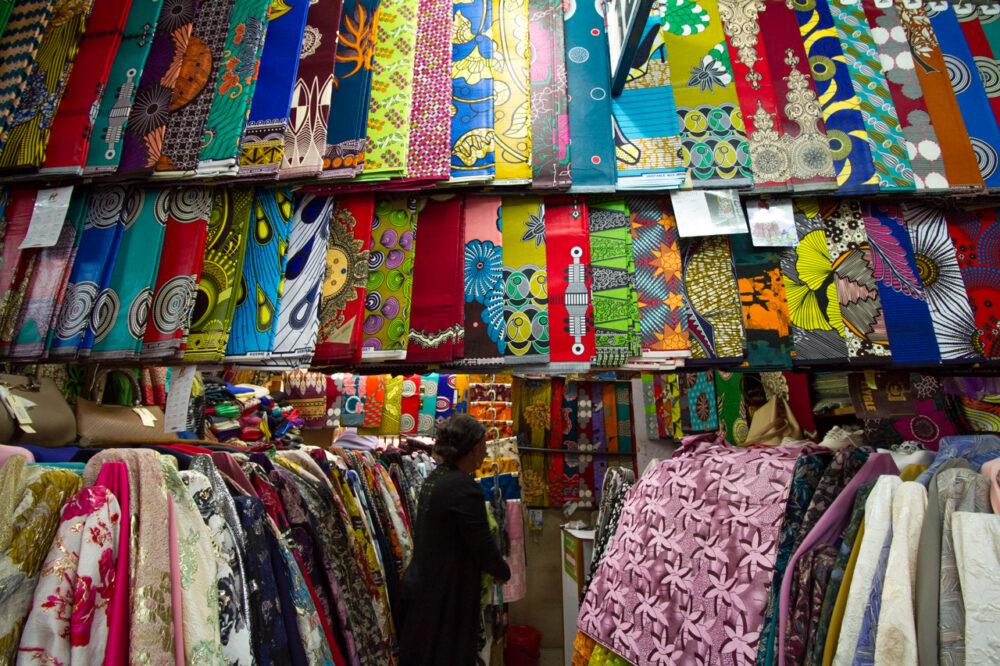 On Gaborone Road in Nairobi’s central business district, you can find at least a couple multi-storied pavilions like the Nairobi Textile Building, packed with dozens of stalls, each lined from floor to ceiling with African fabrics, their spines stacked like books in a library. These fabrics are generally referred to in Kenya as kitenge, a term that usually encompasses Dutch wax print, ankara, hollandais, and other more modern takes on traditional patterns from around the continent.

The most popular brand of kitenge in Kenya – or certainly the most widely distributed – is Anningtex. This company name immediately gives away its origin: not Africa. “An” stands for Anhui, “Ning” for Ningbo. Sold in packs of six yards, each Anningtex product also bears a gold-foil label with a contact number that starts with +86, the country code for China.

Anningtex is hardly the only Chinese company that produces “African fabrics”. In fact, the vast majority of kitenge in Kenya is made by a few Chinese companies and includes brands like Buwanas, Hitarget, Sanhe, and Orientar Java. Some are discreet about their origin; others print “Made in China” right on the label.

For many, this fits perfectly into a familiar globalisation horror story – one in which authentic cultural production fails to survive cheap, mass-produced imitations manufactured abroad. We might think of Kano in northern Nigeria where centuries-old indigo dye pits, incapable of competing with cheaper alternatives, sit choked with trash. Or Ghana’s textile production centres, once a symbol of self-sufficiency and built to localise African textile production, but now shuttered. At best, a valuable craft is dying; at worst, outsiders are both killing and profiting off cultural work at once.

Kenya’s Chinese-made kitenge seems like another example of this, but is it? To whom does kitenge belong? A deeper look suggests the reality is more complex. In fact, there are three stories we can tell about kitenge. Each suggests a different way to think about ownership and authenticity.

Story 1: Culture has many parents but no owners

The first story says that culture is far less pure than we usually assume. It suggests that cultural objects can rarely be traced to a single source and that, as a result, no one can really claim ownership over anything.

The first company to produce wax print was a Dutch outfit called P.F. van Vlissingen and Co. (Vlisco). Established in 1846, the company developed a mechanical method for reproducing handmade Javanese batik prints, intending to sell these cheaper products back to colonial subjects in the Dutch East Indies. This endeavour failed because Indonesians preferred the handmade originals to the machine-made copies, so European printers turned to the British Gold Coast (modern day Ghana) and honed designs to local tastes. Even though wax print production was localised in some cases, as in Ghana under Kwame Nkrumah, tracing this quintessentially “African” fabric to its “true origins” takes us to Holland or Java rather than the continent.

This first story sees China’s manufacturing of kitenge as an echo of this history. It points out that kitenge was never produced in Kenya and has only been popular for a few decades. Culture is created by agents of “contamination”, the argument goes, especially in today’s increasingly connected world. The conclusion then is that Kenyans should not question Anningtex’s authenticity or that there is little use in doing so since there is no such thing as a pure cultural product anyway.

Story 2: Culture is inscribed with meaning by its users

The second story we can tell about kitenge says that ownership does not lie in where an object happens to be made, but in the collective relationship that people have built into it.

To explore this story, we need to go back to 1963 when Kenya gained its independence. Under British colonialism, traditional wear had been banned, but post-independence, dress became part of a national intention to shift the centre of gravity from Europe to Africa. Neither Western nor “backwards,” kitenge soared in popularity.

According to this reading, one could argue that while kitenge is not made in Kenya, it is Kenyan in that it is African – and thus it belongs to Kenyans. For Kenyans, kitenge tells a story of pan-African belonging, solidarity, and identity. In this reading, Kenyans are not victims of Anningtex’s domination but rather agents with a valid claim to ownership of their own. Following this logic even further, one could even suggest that, since the 1990s, when new printing technologies made kitenge cheaper and more accessible to the working class, Chinese companies have actually facilitated Kenyans in expressing their African-ness.

This story says that a cultural object’s authenticity lies in its ability to embody both personal and national memories, stories, and pride. Writing about West Africa, anthropologist Nina Sylvanus suggests that the reason Chinese-made wax prints aren’t considered authentically African (while Dutch-made ones are) is because they have not been around long enough for a social infrastructure – for example, mother-to-daughter inheritances, fabric as investment and as dowries – to have been built around them. In other words, African-ness forms within the alchemy between global goods and local people over time. At the end of the day, the second story goes, kitenge in Kenya are an archive of stories, which do not become less valid depending on where they are made.

The third story insists that, regardless of how much the user embraces it, we must consider the direction in which capital flows and who ultimately profits from the consumption of a product. While the case of kitenge may be more complicated than other examples of globalisation running roughshod over local culture, power, production, and profit do matter.

The importance of this power differential can be felt in the way Kenyan kitenge vendors tense up if you ask them where their products are really from. It can be felt in the fact that most Kenyan consumers do not know where the fabric is made. It lies also in the intuitive loss felt when seeing stacks of “African wax print” sold in Guangzhou by vendors with little knowledge of the rich stories woven into each of these designs or any connection to the ways in which they will be used. If Chinese-made kitenge is so empowering and authentically Kenyan no matter where it’s from, why does it still feel dirty to tell people it’s from China?

The deception is part of what tips the power balance. Even though Chinese-made kitenge is a fragile secret kept not only by Chinese manufacturers but Kenyans along the supply chain – from the sole Kenyan distributor based in Eastleigh, to stall owners on Gaborone Road, to individual vendors – consumers are not in on the secret. Lacking this information strips consumers of their agency to choose whether to continue using kitenge or not.

The other part is the fact that most African textile producers are simply unable to compete with Chinese producers: in other words, for many Kenyans, there’s no real “choice” anyway. Early Dutch wax prints did not emerge from innocuous cultural mixing on an equal playing field. Far from it: wax prints were a profitable product built for a colonial system in which producers had control over production and markets. While Chinese companies do not operate in a strictly colonial way, it is nonetheless the case that, for now, Kenyans can only choose between Chinese-made kitenge or no kitenge at all. This is hardly empowering.

Where do notions of ownership, authenticity and power lie? In a cultural object’s history (a long story with no one source), its usage (sold, sewn, and worn by Kenyans), or its production (Made in China)?

These questions feel particularly sensitive and salient around kitenge, a material literally worn on the body and one which is personal, cultural and political all at once. The three stories we can tell take us in wildly different directions. One spirals us down into history and leaves us in colonial Holland, Java, or somewhere else altogether. A second shows us how Kenyan- and African-ness came to be inscribed indelibly onto kitenge, even as an imported product from the beginning. And a third points to how imbalances of power interact with claims to ownership.

This leaves us with the question of which of these stories is the most convincing. However, it also leaves us with a second, and perhaps more important question: Who gets to decide?

According to Kenyan stylist and designer Sunny Dolat, the authenticity of Kenyan fashion is often defined by people outside the country. He says that, rightly or wrongly, kitenge has become a visual shortcut for “quintessentially African”, while items actually made in Kenya are often dismissed as “not African enough”. These decisions, he writes, are informed by the white gaze, the Black diaspora, and others.

“Is it odd that fabrics that have been made by others and travelled so far have a belonging to our sense of self that supersedes that of textiles actually woven or fabricated on our shores?” asks Dolat.

For Dolat and other Kenyan artists then, questions around kitenge are not purely philosophical, historical, or backwards-looking. Rather, examining the many stories of kitenge is a necessary first step in re-imagining and re-defining what can be considered Kenyan today and tomorrow. A big part of this endeavour, which includes paying attention to who makes these decisions, is recognising both how Kenyan and un-Kenyan kitenge really is.