Following its big election victory, Frelimo will continue to consolidate political and economic power to the detriment of most. 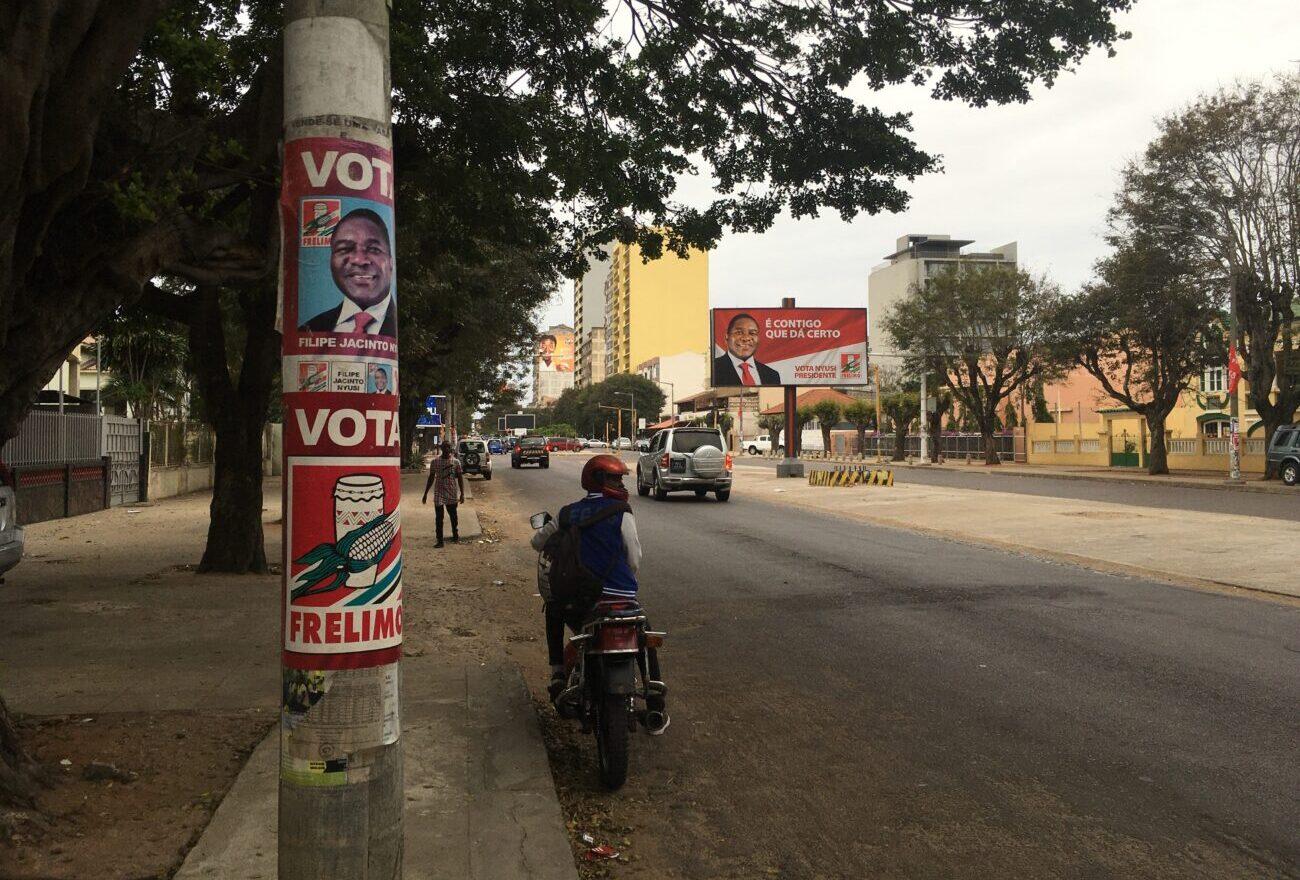 Frelimo posters were plastered across Maputo in the run-up to the elections in Mozambique. Credit: James Wan.

On 15 October as Mozambique voted in general elections, the streets of Maputo were filled with an overcast calm. The usual hum of the capital abated for a day. Street corners ordinarily packed with fruit vendors sat empty in the shadow of huge “Vota Frelimo” billboards that broadcast their bright red messages to no one.

Election day is a bank holiday in Mozambique and many people spend the day with their family and friends after voting. In these elections, about half of the registered voters did so without voting at all. Turnout was just 51.8% in 2019, a remarkable plummet from the 87.9% in 1994 though up slightly from the last elections.

One reason for this is that the outcome was a done deal. Despite huge corruption scandals and economic upheaval in the last few years, even opposition supporters who spoke to African Arguments conceded that little would change at the ballot box. President Filipe Nyusi would be re-elected for a second five-year term. The ruling Frelimo party would extend its 44-year grip on power.

The only unknown was by what margin the embattled ruling party would win and how many of the ten provincial governorships – being directly elected for the first time – it would secure. As the results came in, the answer became clear. Against expectations, Frelimo increased its vote share in the presidential contest to record a landslide 73%. It won every single province and extended its majority in the National Assembly to more than the two-thirds needed to change the constitution.

The main opposition Renamo, which hoped to secure a few governorships, was quick to reject the results. The European Union observer mission said “an unlevel playing field was evident throughout the campaign”. In the run-up to the vote, 300,000 ghost voters had reportedly been registered in Gaza province and a prominent election observer was assassinated by a police hit squad. On the day itself, there were allegations of ballot-stuffing, fraud and other irregularities.

In the aftermath of the vote, a group of domestic civil society organisations concluded that the process had been Mozambique’s “most corrupted and fraudulent” yet and accused Frelimo of having “captured and assaulted the electoral machine”. A study by the Centre for Public Integrity (CIP) – using data from Electoral Institute for Sustainable Democracy in Africa’s (EISA) parallel vote tabulation – calculated that Nyusi’s vote tally had been inflated by at least 11%.

“Nobody has a good word to say about Frelimo”

To many in Mozambique, the size of Frelimo’s victory came as a surprise, if not a shock. President Nyusi is widely regarded as lacking in vision, while disillusionment with the ruling party is arguably at an all-time high.

“There are no reliable opinion polls in Mozambique,” says Tom Bowker, editor of Zitamar News, “but anecdotally whenever I travel outside of the south, nobody has a good word to say about Frelimo”.

Some analysts suggest it was the regime’s nervousness about its popularity that pushed it to win at any cost, even if the result was that it won big rather than winning smart. Others suggest that President Nyusi’s inner circle mobilised all the resources at their disposal in order to strengthen their position in the party. It is hard, however, to say what support Frelimo has in reality.

“The level of fraud has been so high that at this time Frelimo itself does not know what its acceptance levels are in the country,” says Edson Cortez, head of CIP.

It would be a mistake to ascribe the results purely to fraud, however. According to Ruth Castel-Branco, a Mozambican scholar and labour activist, Frelimo uses its state control between elections to undermine opposition officials and engender frustrations with Renamo. Furthermore, she says, those parties also have themselves to blame. Renamo was not only internally-divided following the 2018 death of long-time leader Afonso Dhlakama, whose undemocratic rule of the party left behind no clear successors, but it also failed to offer a meaningful alternative to voters.

“Opposition parties have tended not to engage in contentious politics around local issues – for example, the extension of social welfare, the improvement of public services, the introduction of employment guarantee schemes, fighting back again land dispossession,” says Castel-Branco. “Instead, they have tended to focus on toothless proclamations and backdoor negotiations around power sharing.”

Across most of Mozambique, the election results were greeted much in the same way as election day itself: with some hope and frustration, but ultimately resignation. The country has returned to business as usual, which is a source of concern for many given the country’s current direction.

Nyusi’s first term will arguably be remembered for two things. One was the securing of a fragile peace deal with Renamo, which may now be under threat again following the election. The other was the revelation of secret state loans amounting to $2 billion. That scandal rocked the country, led the International Monetary Fund (IMF) and other donors to suspend aid, and upended Mozambique’s reputation as being an economic success story.

According to several analysts, the same dynamics that led to this high-level scandal will only continue under Nyusi’s second – and final mandated – term. They warn of increased corruption and the consolidation of power and profit among politically-connected elites.

“Will Frelimo be able to address rising poverty, inequality and unemployment? Does it have the vision and political orientation to do so? Given the current class conjecture, I doubt it,” says Castel-Branco. “Our national political elite is very much aligned with multinational corporate interests.”

Increased investment in the extractives industry and Mozambique’s nascent multi-billion-dollar natural gas sector will raise the stakes even further. This could intensify competition, state capture and inequality to the detriment of ordinary Mozambicans.

“You will see reinforcement of the alliance between international great capital and local businessmen that are very close to the government or belong to it,” says João Feijó, a researcher at the Mozambican research organisation Observatório do Meio Rural (OMR). “Some people will benefit, but the majority that don’t have access to education or training will not, especially because those investments don’t create many jobs.”

Feijó predicts that this will lead to growing frustrations particularly in the face of raised expectations. This combination of poverty, economic grievances and political powerlessness could lead to increased support for militancy, he says. Following the election, there were reports of attacks in the Central Region, where opposition support is strongest, while the army has been fighting an Islamist insurgency in the far north province of Cabo Delgado for over two years.

“The government is aware of this threat of increased militancy,” continues Feijó . “That’s why they are investing so much in arms and why Russia just gave them the arms they need. You will have a fragile state more and more militarised in order to defend itself.”

Cortez from CIP echoes these concerns. Although the initial drama of Mozambique’s just-concluded elections subsided quickly, he warns that a quiet return to business as usual does not bode well for the country.

“In my opinion, we have all the elements together to go through a political and military crisis again, and it has already started,” he says.