In February 2019, Algerians took to the streets in the country’s largest demonstrations since independence. This began a movement, known as Hirak or the Revolution of Smiles, which continued ever since. The people are demanding a complete overhaul of the opaque cabal – of businessmen, security forces and the army – that has shared power amongst themselves at the expense of the country since 1962. In April, the protests resulted in the resignation of President Abdelaziz Bouteflika who had been in power since 1999 and wanted to run for another term. Fresh elections on 12 December saw President Abdelmadjid Tebboune take his place.

But the people are not satisfied. Many opposed the holding of elections in which all five candidates were former Bouteflika ministers. They are demanding a new constitution and a transition to a completely civilian state; not the continuation of the cabal’s stronghold just with a new face. Some protesters, tired of the demonstrations, want to give the new president a chance. But many others have been further spurred to action by the ascension of a man who is closely liked to Army Commander-in-Chief Ahmed Gaid Salah and seen as a representative of the cabal’s military clan.

And so, the protests continue. For 43 weeks now, football fans, feminist activists, students, elderly people and entire families have continued to demand change. The movement contains people from all socio-economic backgrounds, generations and regions. And despite the government’s attempts to pit groups against each other, it includes Berbers marching alongside Arabs and the religious alongside the secular. On the streets, the people have a common cause: a new Algeria.

This December, I spoke to and photographed some of those fighting the power. I asked them why they are protesting, what has changed for them since the beginning of Hirak, and of their dreams for their beloved Algeria. 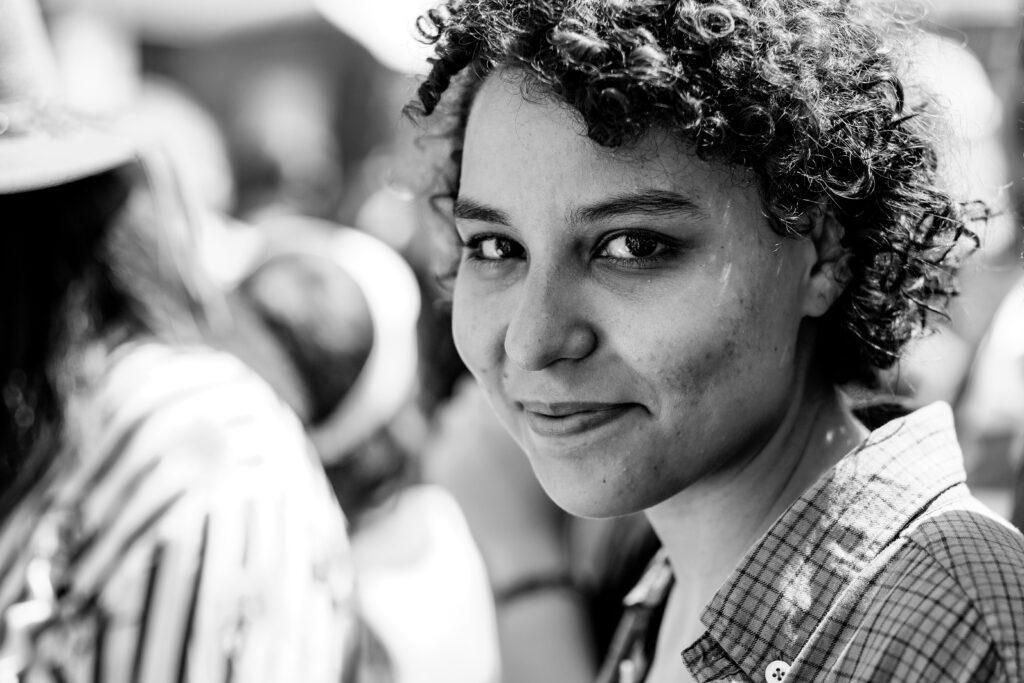 I am in the streets because I want a real change in Algeria. A complete change of the system and especially a change of the country’s mentality. As a member of the feminist movement, I have been demonstrating since the first Friday on 22 February. We usually meet in a space we have called the ‘feminist square’. Then we join the rest of the march. I will never stop protesting. I will do so until women are equal to men. I will stop when the family code is repealed, which continues to place Algerian women as minors for life.

Nothing has changed, mentalities remain archaic. Despite some progress, we still meet many people who tell us that our demands for gender equality are not a priority. It’s hard to change people’s mindset. A democracy cannot be created without real equality.” – I. 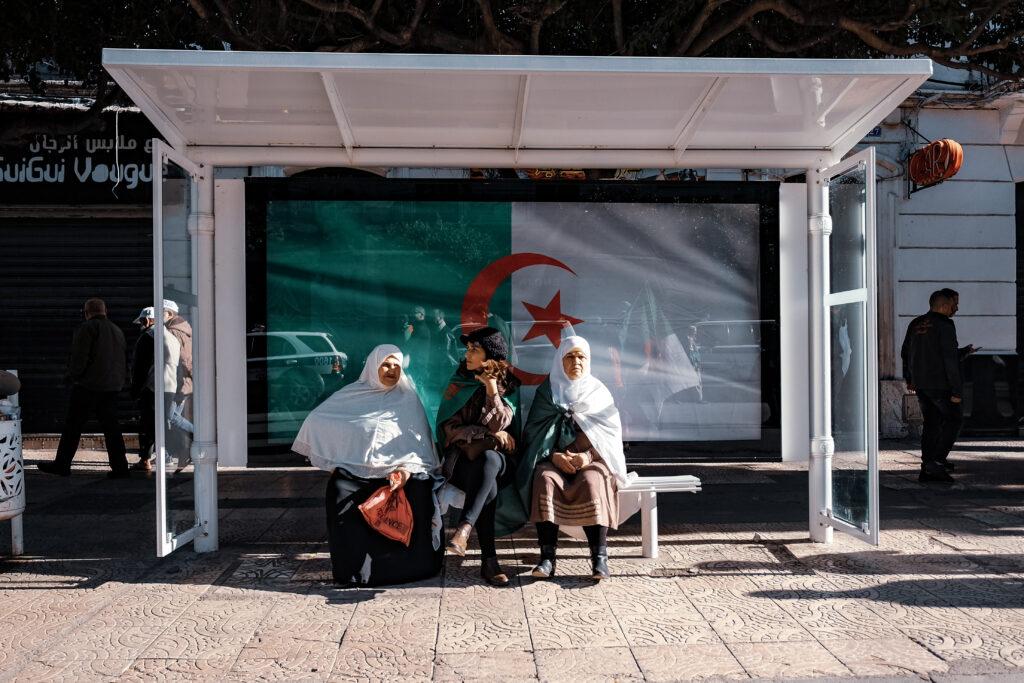 At the beginning of the demonstration, Hirak protesters rest at a bus stop. Algiers, 29 November 2019. We have been protesting since long before the beginning of the Hirak. In the stadiums, our demands are also and above all political for the end of ‘hogra’ (disdain). We have always felt mistreated and humiliated by the police and the state in the stadiums and we were the first to take to the streets to shout out our anger. We are tired of living in this misery. We are tired of our brothers leaving, fleeing this country, sinking into the Mediterranean.

What has changed is the public’s view of us. They used to see us as hooligans or criminals. Sometimes, we feel like we belong to this country again. Like we have found our place back. The rest is pretty much the same. And we still under a ‘hogra’ system.” – H. 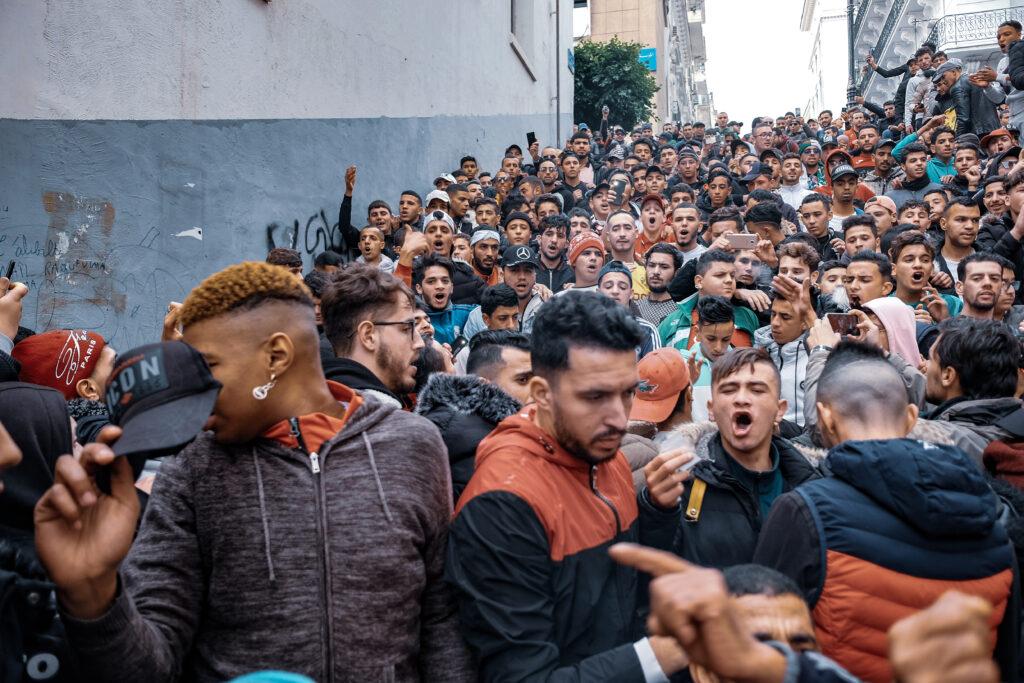 As soon as the results of the presidential election were announced and Abdelmadjid Tebboune’s victory announced, Algerians took to the streets of Algiers in large numbers. This was the the 43rd consecutive Friday of the Hirak. Algiers, 13 December, 2019. I keep going out on the street because nothing has really changed. And this even with the pseudo election of the regime. Since 1962, we have not had any real independence. We want real independence. The methods of colonialism have continued with this system. It is for my children, for the generations to come that I go out and scream my anger. Corruption and repression have condemned this country and this must stop.

The wall of fear has fallen. The balance of power has reversed. We’ve reoccupied the public space. We have the impression of having known a country in a perpetual state of siege. This hirak allowed us to rediscover our cities, our streets, to occupy them freely and fully. Without having to hide.” – K. Algeria is one and indivisible. This power has always tried to divide us. And it continues to do so with the repression against Amazigh symbols. I reject the voting and elections organised by the same system. For me, Bouteflika has still not left power. His men are still in charge. What I want is a real transition with power transferred to civilians.

The Algerians did not speak to each other. They didn’t trust each other. This hirak has made it possible to recreate bonds, to bring people together. We felt a new solidarity between Algerians. The government has always favoured the division of Algerians: diaspora vs. locals, Kabyles vs. Arabs, French-speaking vs. Arabic, religious vs. seculars. This revolution made the Algerians overcome these divisions and a new unity was found. There are signs saying thank you to this regime for having united us: ‘Merci de nous avoir unis’” – M. I protest for a better Algeria. And so that we Algerians can begin to dispose of our wealth. And to regain our real independence. So that this youth can finally live with dignity. So that we can finally take our destiny into our own hands. So that there is no more interference. Whether it comes from France or the Gulf, it is up to Algerians to have their resources at their disposal.

I want an Algeria of social justice and economic concerns. Social justice is also at the heart of our concerns. I would like my comrades to be cleared.” – Y. Two days before the 12 December presidential elections, Algerians took to the streets to say no. Algiers, 10 December 2019. 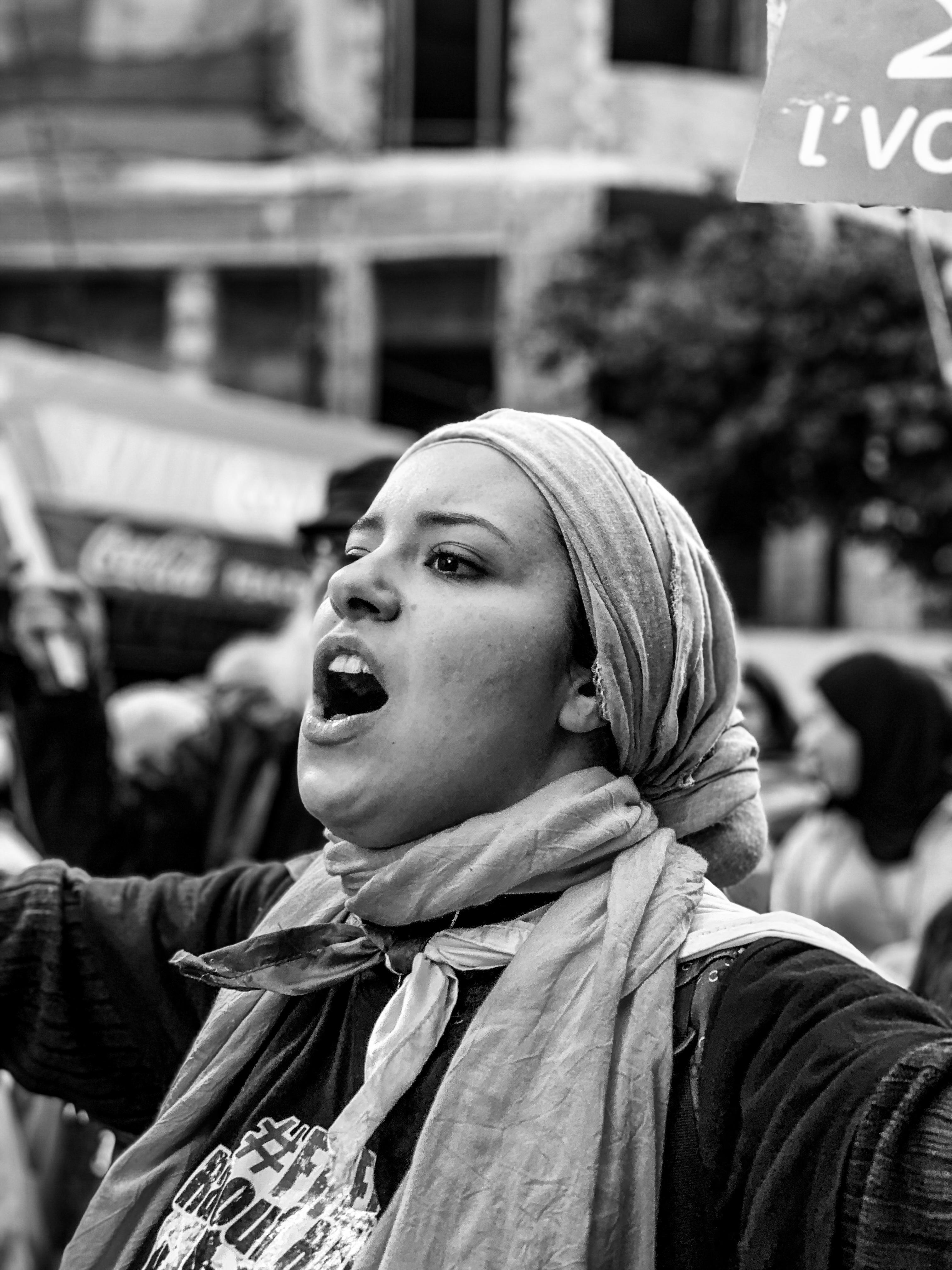 I continue to protest because nothing has changed and because freedom of expression is declining. Our demands have not been heard. We have been imposed an electoral calendar while, outside, the police are hitting the demonstrators. My brother is in prison for his opinions. He is arbitrarily detained because he dared to express himself freely. Until the prisoners of conscience are released, I will continue to go out and demonstrate.

Hirak has re-politicised the population. We have become more aware that we have a role to play, that we will have to seek this change through our own efforts, that nothing will fall from the sky.” – H. Supporters of the historic MCA club in Algiers climb a building and sing to the glory of this revolution. The role of ‘ultras’ was decisive because many demands were born in the stadiums. Algiers, 8 March, 2019. 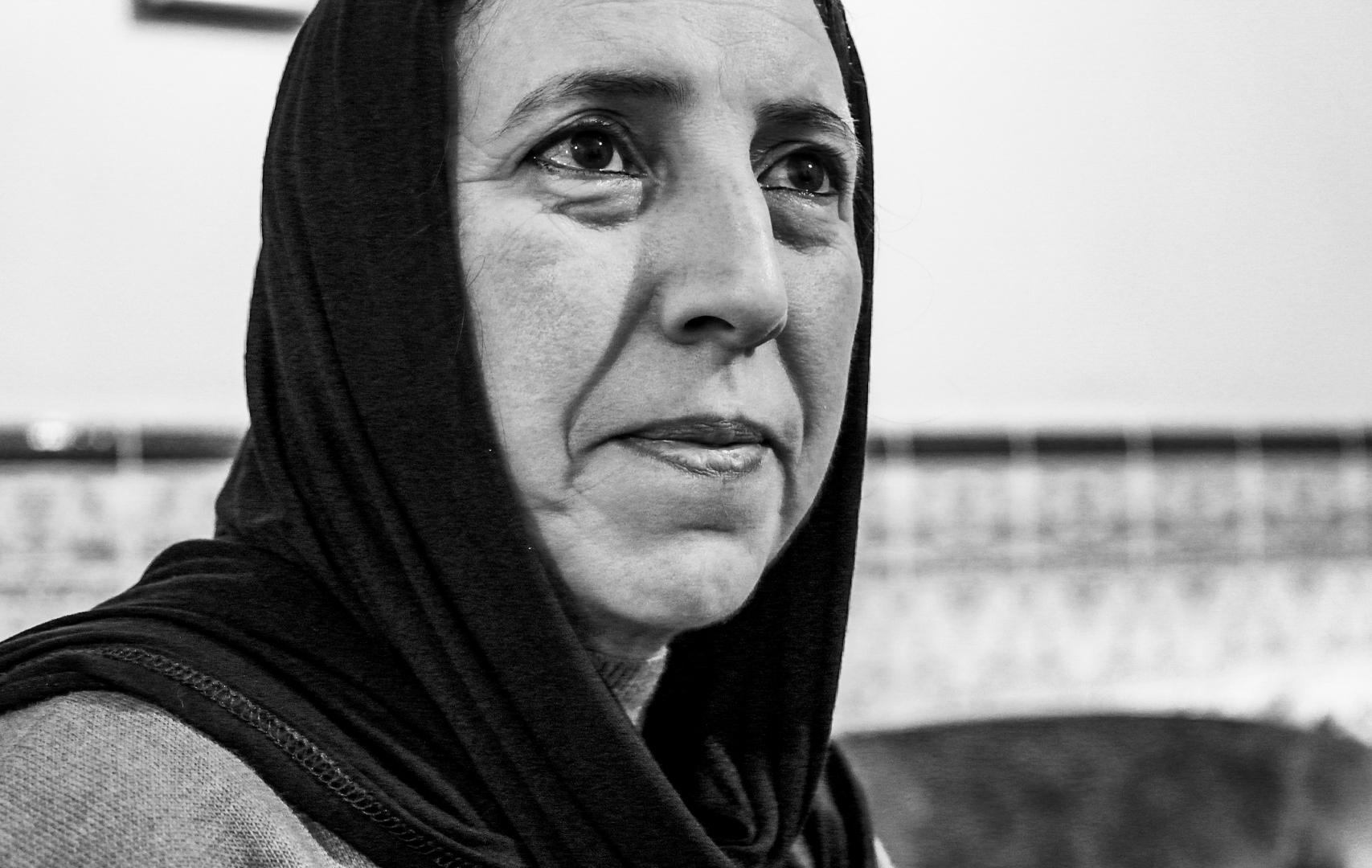 My brother is a prisoner of conscience. He experienced unemployment despite an engineering degree. He had to leave his country for more than ten years. His savings were stolen during the Khalifa bank scandal. When 22 February arrived, he decided to leave and finally asked for a better Algeria, which he had always wanted: free, plural and democratic. And a couple of months later, he was imprisoned for that. We are proud of him. We consider his struggle to be just and noble. And we continue to go out to demand his release and to keep on fighting for his ideas.

We’re not going to stop. We’re not going to give up. I want the Algeria that all Algerians dream of. A free, independent, democratic Algeria. Where the one who prays will peacefully coexist with the one who does not. Where the Kabyles will be free of affirming their Berberhood. Where true justice will be done. A country where we can participate in the political life without the risk of being arrested.” – O. 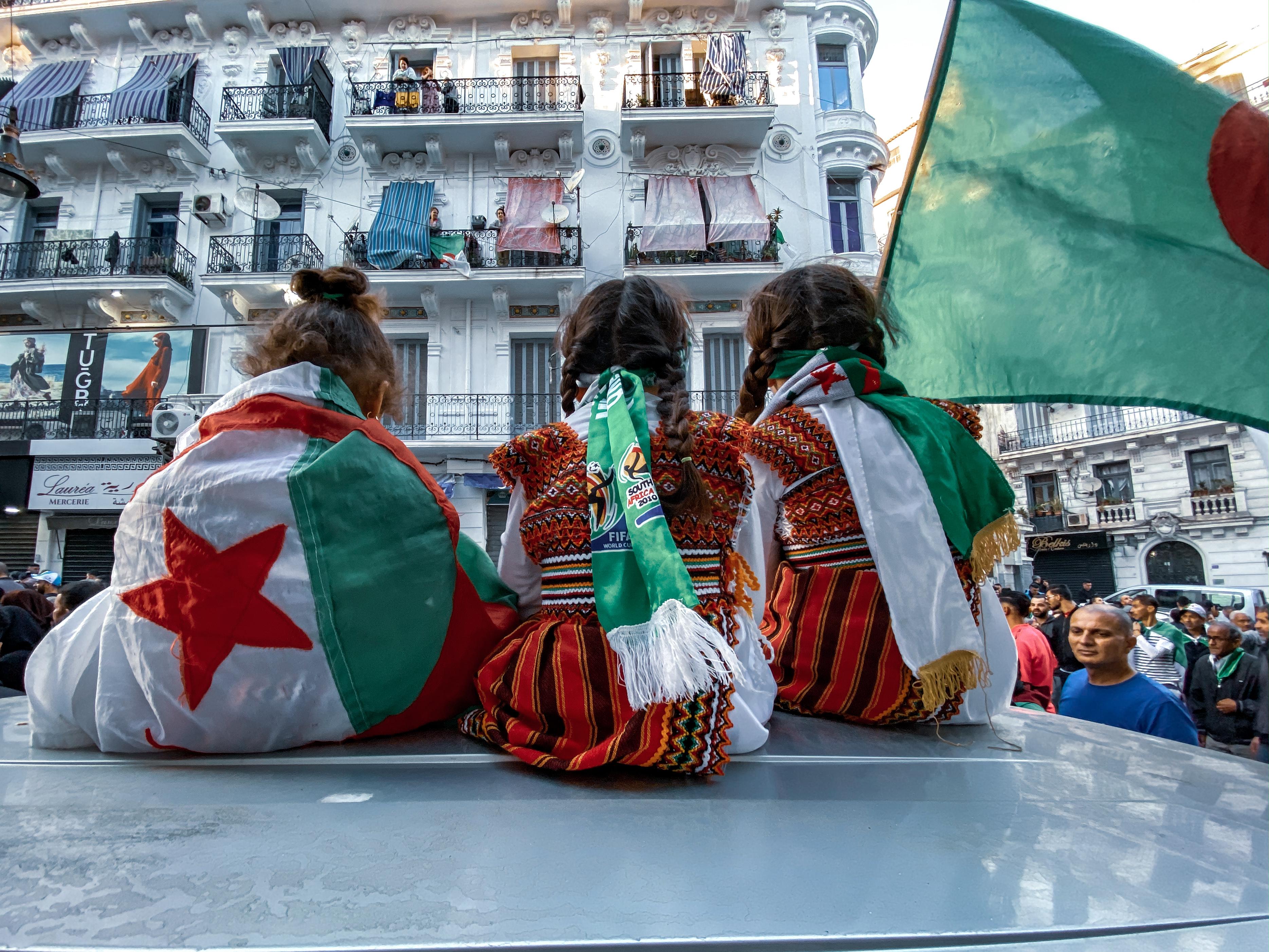 I go out for the youth. With my friends, we consider that we are in the process of a true revolution. We are doing what our elders have not finished. Older people who used to criticise us are now discovering that we are capable of making a difference. It is up to us to roll up our sleeves. We are not afraid. We are ready to do anything to achieve our objectives. Based between Lisbon and Algiers, Sabri Benalycherif is an independent photographer member of Studio Hans Lucas. After graduating in Business Administration (NEOMA Business School), he has several professional and entrepreneurial experiences in North Africa and Latin America. Passionate about image and the universe of media, he turns to documentary photography and photojournalism in 2017. Interested in societal and political issues through a documentary and photo-journalistic approach and assuming the role of image activism, his series focus in particular on North African territories, their youth and the many challenges ahead. His work has been published in many publications such as Le Monde Diplomatique, Les Échos, Il Sole 24h or Télérama. It was also exhibited at the Avignon Festival in July 2019.