The Gambia’s president said he’d step down after three years. Will he?

Adama Barrow will reach three years in office in January 2020. A new movement is pressuring him to keep to his word and step down. 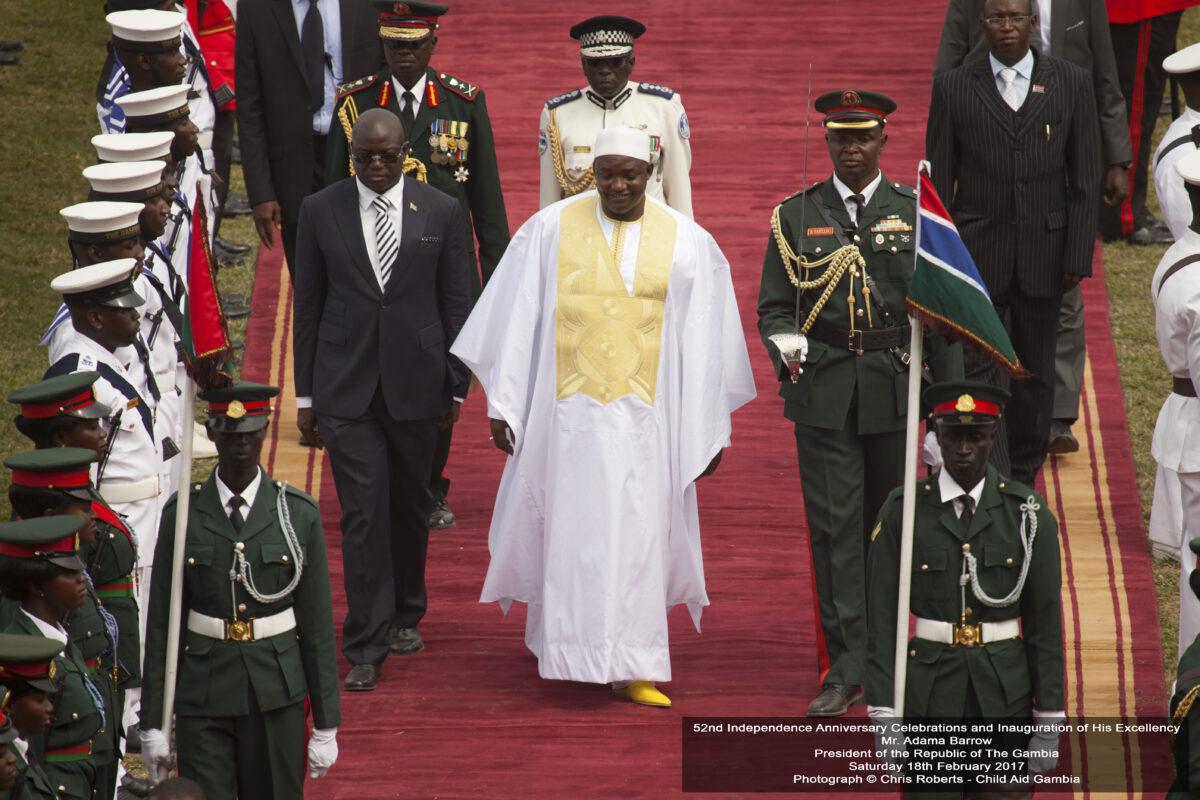 President Adama Barrow at his inauguration in 2017. Credit: Wikimedia Commons.

When Adama Barrow became The Gambia’s new president in January 2017, he quickly reversed many of his predecessor’s isolationist policies. After 22 years of authoritarian rule under Yahya Jammeh – who had to be pressured to leave the country by a regional military intervention when he refused to step down after losing the elections – the democratically-elected President Barrow announced The Gambia would rejoin the Commonwealth and the International Criminal Court (ICC). At the same time, international support for the country renewed, with donors at an EU-organised conference in 2018 pledging $1.7 billion over three years to spur The Gambia’s economic growth and strengthen its democratic institutions.

Despite this foreign support, however, Barrow’s domestic support has been shaky. This is partly due to the way he came to power. Barrow was never the leader of a political party, but was chosen to head an opposition alliance for the December 2016 elections, which formed after security forces detained and killed members of the opposition United Democratic Party (UDP). Barrow had been part of the UDP, but resigned his membership so he could lead the coalition without favouring any one of its seven constituent parties.

Since coming to office, various internal divisions have come to the fore. Barrow has already sacked two vice-presidents and is now on his third. The second of those vice-presidents was UDP leader Ousainou Darboe, while Barrow has also removed two other UDP ministers. These reshuffles highlight the friction between the president and his former party, which won 31 of the 58 seats in parliament in 2017. There are also divisions within the UDP, however, which were seen this November when it expelled eight of its MPs claiming they had prioritised their loyalty to Barrow over that to the party.

Tensions have mounted also over the length of the president’s term. A Memorandum of Understanding (MOU) agreed by the opposition coalition in 2016 stipulated that if Barrow were to win, he would serve for just three years as a transitional president before organising fresh elections in which he would not stand. Barrow has now made it clear that he does not think this “gentleman’s agreement” should override the five-year term set out in the constitution.

Some parties see this as a betrayal and have been outspoken about their disappointment. Calls for Barrow to keep his promise have been led by the Three Year Jotna movement (meaning “three years is up” in Wolof), which has scheduled protests for 16 December following an approved permit from the police. Barrow is undeterred by the proposed demonstrations and has further fuelled the flames by announcing this week his plan to form his own political party to run in the next election.

As well as dealing with disagreements from within the ruling coalition, President Barrow has also faced challenges from the armed forces. In May 2019, eight former soldiers were convicted of plotting to overthrow Barrow in 2017 in what has been labelled the “WhatsApp coup” due to the use of the social media platform to plan the attack. In September 2019, another four soldiers were convicted of mutiny in a separate incident aimed at senior military personnel.

Following the coup in 1994 the Gambia’s military and many see these events as signs that some soldiers still hold an allegiance to their former commander. Some others, however, suggest the accusations against former military personnel are exaggerated and intended to sow fear in order to justify the continued presence of ECOMIG, the military force led by the regional West African bloc ECOWAS.

These soldiers originally came to The Gambia to pressure Jammeh to leave office in January 2017, but the timeline for their presence has been extended several times since at Barrow’s request. ECOMIG’s mandate, which currently extends to March 2020, includes the protection of the president and other state facilities. Barrow and other supporters of the mission see the regional intervention as a key factor in what has been a mostly peaceful political transition. Yet keeping the 500 foreign troops in country for several years has been a contentious issue within both the civilian and military sector. Among other things, their heavy presence in former president Jammeh’s home region has spurred protests and clashes, including one incident in which ECOMIG soldiers opened fire on protesters.

In 2017, President Barrow also launched a Security Sector Reform (SSR) project. Expenditure reviews show the current state of the armed forces is not sustainable and the proposed reforms include a plan to potentially downsize the armed forces. There has been no recruitment for the last three years. With poor economic conditions, however, military personnel and policy-makers alike are worried about the future of soldiers who may be dismissed. But given the ongoing lack of details around the plans, security forces remain in suspense about their fate.

The Gambia’s armed forces have also been in the public spotlight due to the ongoing Truth, Reconciliation and Reparations Commission (TRRC). This body is investigating and creating a historic record of the human rights violations under Jammeh. Public hearings, many of which have seen senior members of the security services called to testify, started in January 2019 and are being televised and broadcast on the radio daily.

Our interviews with members of the armed forces, including both top-ranked officers and enlisted soldiers, found the vast majority highly supportive of the TRRC. They explained their hope that the process would support their claim that the human rights abuses under Jammeh were carried out by a small number of the paramilitary “Jungulars”. Others noted that the process could show that many of the victims of the past regime were in fact within the armed forces.

More than a transitional president

As the anniversary of Barrow’s first three years in office approaches, the president has no plans to step down despite pressure from the Three Year Jotna movement. He has no legal obligation to do so as the internal MOU, which is the basis for the controversy, is not legally binding. If demonstrations ensue, the way in which the government responds will be crucial. Protests under both Jammeh and Barrow have led to violent reactions by the security services, which have escalated tensions and shifted political alliances.

At the same time, growing divisions within the leading UPD party and the increasingly antagonistic rhetoric between coalition partners suggest parties are gearing up for the 2021 elections. Given this highly competitive environment, Barrow is less likely to go forward with controversial programmes such as changing the size and budget of the security forces. Tough decisions about how to reform the armed forces will likely be inherited by the winner of the next election.

When Barrow first took office, many were expecting him to preside over a new era in The Gambia for three years before stepping aside. Three years on, it is now clear that Barrow sees himself as more than a transitional president. Whether Gambians share that view will likely be determined in 2021.

Maggie Dwyer is a Lecturer in the Centre of African Studies at University of Edinburgh. She can be found on Twitter at @MagDwyer. Ismaila Ceesay is a Senior Lecturer in Political Science at the University of The Gambia. He can be found on Twitter at @ismailaceesay. Their research is part of the project titled ‘Security Force Assistance’ based at the Peace Research Institute Oslo.