Coronavirus Seen From the Land of Ebola: Lessons Learned, Reflexivity and the People in Guinea The ‘staff’ organises a football tournament in Guéckédou in November 2014 (‘staffs’, in this context, are teams or groups which bring together young people from a neighbourhood or a school) © Frédéric Le Marcis, from a school

On 9 January 2020, the People’s Republic of China announced that the city of Wuhan, the capital of Hubei province, was facing an epidemic linked to the emergence of a new type of coronavirus, called 2019-Cov (or Covid-19).

Since then the epidemic has spread. As usual since the first worldwide plague epidemics in the Middle Ages, and the Spanish flu, it has followed global commercial networks, with unprecedented speed and a marked impact on economic activity.

On Thursday 30 January 2020, the WHO declared the Wuhan epidemic an International Public Health Emergency. Covid-19 is thus evidence that an epidemic is always the result of the connection – one might say the product of a collaboration – between the nature of the virus (here its capacity to be transmitted easily) and human beings (the nature of the social ties they develop, the economic flows they establish, and the way they create imaginary representations to make sense of the epidemic’s onset).

The Covid-19 epidemic is therefore distinguished less by the logics behind it than by the speed of its spread.

Thus, the African continent – less well connected to the world economy than the countries of the North – is for the time being relatively spared by the epidemic. At the moment, we are mainly observing cases where the virus has been imported; these seem to be under control, but we do not know how many cases are not being identified, and the capacity of the health systems to manage a large number of patients in intensive care is a major source of uncertainty.

Some people, however, are rushing to dig out hackneyed arguments, with more than a whiff of the scientific racism of the nineteenth century, to justify this unusual epidemiological situation.

‘Africans are better able to resist Covid-19’, they say, just as people in colonial times used to say that Africans were more resistant to malaria, so as to justify preventive measures reserved for Whites. ‘The heat of the African climate stops the virus surviving.’ Here the climate, which was the tomb of the Whites, now becomes a lifeline for Africans, without any regard for the many different climates across the continent, or more simply for the fact that the temperature at which the virus is killed off is around 56 degrees Celsius.

We would here like to emphasise, on the basis of our observation of the preparations being made for the Covid-19 epidemic in the Republic of Guinea, how the experience of the Ebola epidemic (2014-16) among actors in public health institutions, and the development of laboratory capacities, are deeply structuring the methods of response to the epidemic risk but also failing to address some of the hidden problems and assumptions in these methods. Trauma and opportunism underpin the rationality of the actors, and a lack of reflexivity, together with a new variant of the old relationship between experts and non-experts, is affecting that same rationality.

As soon as the Covid-19 epidemic was announced, Guinean and international institutional actors present on its territory all mobilised. Very quickly, an exchange network using the WhatsApp platform was set up in order to share information in real time. A screening system was organised at Conakry airport and in the main ports (including Boké and Boffa), and crisis meetings were held. National bodies involved in these activities (the National Institute of Public Health, the National Health Security Agency) as well as international bodies such as the Pasteur Institute of Guinea (IPEGUI, France) and the Centre for Research in Epidemiology-Microbiology and Medical Care (CREMS, Russia) emerged as major players in these discussions.

The spectre of Ebola was significant in these exchanges, in the form either of a direct reference (‘we do not wish to relive such a trauma’) or in the form of an automatic response and the use of concepts resulting from the reaction to Ebola and the structures set up as a result of it, falling within the paradigm of laying preparations for an epidemic – a paradigm known in the language of global health as ‘preparedness’: preparation, vigilance, and diagnostic capacity.

Reading the exchanges on the platform, it appears that in addition to promoting the spread of reliable information on the epidemic, it was also an opportunity for individual actors (experts, consultants) who had made a name for themselves during the Ebola epidemic to remind political actors of their abilities, highlighting their Ebola experience so as to advise on the response to coronavirus.

It was also a chance for representatives of institutions either to bring their preparedness to the eyes of the political authorities, or to occupy the diagnostic field by asserting their capacities. There was a race between IPEGUI and CREMS to announce the obtaining of the first diagnostic kits – until the National Institute of Public Health reminded everyone that, as a sovereign institution in the Republic of Guinea, it was responsible for coordinating diagnostic protocols, with the support of available partners.

Thus, the dynamics of competition between laboratories, observed during the Ebola epidemic (with competition between therapeutic trials, and vaccine trials), is witnessed again in the competition to identify the virus. In this competition, national authorities can only emphasise their legitimate sovereignty and call for frank and open collaboration.

A salutary vigilance – which calls for more reflexivity

The mechanisms described here augur well. They testify to the capacity of the actors to draw on their experience, to use knowledge and practices acquired in the past for present purposes, and to develop automatic responses. Basically, they bear witness to the traces left by the epidemic on institutions and actors alike.

However, we must beware of non-reflexive automatic responses. Each epidemic is different because it always takes place in different political and economic contexts which change the terms of negotiation between viruses and human societies. (See also ‘Covid-19 in Africa: “Know Your Epidemic. Act on its Politics”‘, by Alex de Waal.)

Actors in the response to the Ebola epidemic in the Democratic Republic of Congo have had the bitter experience of discovering how complex it can be to carry out public health actions in a space with multiple and competing political legitimacies.

However, there remains a blind spot in the real-time assessment of this ‘preparedness’: the people. While institutions appear prepared and mobilised, as evidenced by the recent identification of a first case (a Belgian woman returning from leave), then a second (a Guinean woman returning from Italy) and the third and fourth cases (a senior civil servant and his wife coming back from Europe), it remains to be seen how the general population will make sense of the onset of a new epidemic (which unfortunately is almost inevitable) and that appears to affect elites only, in a tense political environment where there is a lack of trust between the population and the government.

A general election was held on 22 March (after multiple postponements), as well as a referendum that would allow President Alpha Condé to run for a third term (impossible under the current constitution). The results of the pool remain to be disclosed, but this plan was meet with considerable opposition and demonstrations lasting several months have already killed more than 20 people. During and following the election day, riots occurs in Conakry and in other major cities (such as Mamou, Labé, Kankan, Nzerekore) and around 500 voting offices have been destroyed by demonstrators. Between 10 to 14 people have been killed by the police forces.

The government, in view of the risk from an epidemic, had prohibited gatherings of more than 50 people, but decided to hold the election on 22 March. Since then, the airport has been closed, so are the schools and universities until further notice. But the authorities seem betwixt and between the health logics of implementing constraint measures to prevent the spread of the virus, and the anticipation of a violent reaction to the announcement of the vote. This tension results in a sort of stand-still detrimental to an effective response to the outbreak. 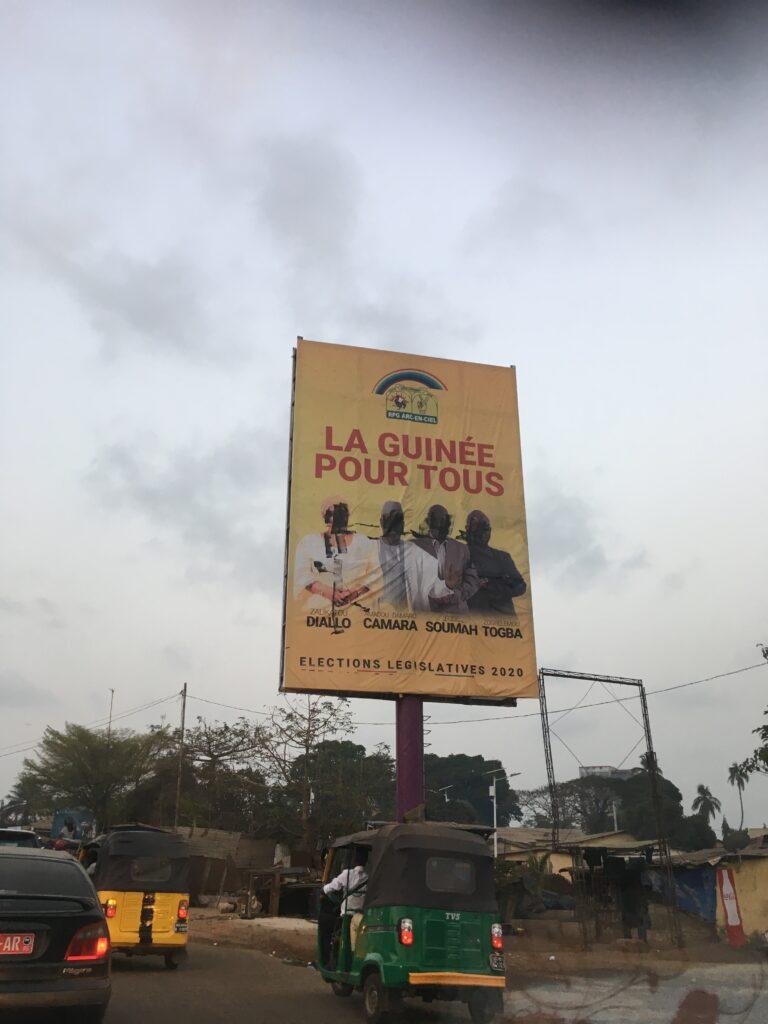 The simultaneous timing of the epidemic risk and the political crisis constitutes a breeding ground for a particular interaction between human beings and the virus. This specific assemblage lacks a catalyst (or a reagent, to spin out the laboratory metaphor). This catalyst is the habit adopted by national elites of not addressing their populations as a sum of thinking and acting individuals, and limiting communication on the epidemic to those able to converse in French.

The vast majority of Guineans who speak Maninka, Susu or Pulaar (to cite only the majority national languages) are never addressed by specialists who are able, in simple words, to state what is known and not known about the virus and the best ways to protect yourself from it. Instead, communication (however relevant it may be in substance) is confined to the French-speaking media, leaving the door open for the majority of the people to form a necessarily political interpretation of the methods of combating the epidemic.

Here we find the characteristics of the response to the Ebola epidemic, where the recognition of the people’s emotions and their cognitive abilities were for a long time ignored. Caring for one’s population, however, requires that they be fully recognised as people.

*This article was first published in original French on the Libération blog http://libeafrica4.blogs.liberation.fr/2020/03/19/le-coronavirus-depuis-la-terre-debola-lecons-apprises-reflexivite-et-population-en-guinee/

Frédéric Le Marcis is Professor of Anthropology at the École Normale Supérieure de Lyon (ENS de Lyon), member of the research team Triangle (UMR 5206) and a Senior Researcher at the Institute for Research and Development (IRD). Currently working in the Republic of Guinea, his research explores health issues especially viral experiences in Guinean history and the circulation of global models of care and punishment in the context of emerging disease and pandemics. See his recent publications at: https://www.cairn.info/revue-politique-africaine-2019-3.htm and https://orcid.org/0000-0001-8302-0864.