In Malawi, a ritual is under threat from Christian preachers. Why?

Gule Wamkulu is a treasured tradition that locals argue should be preserved. 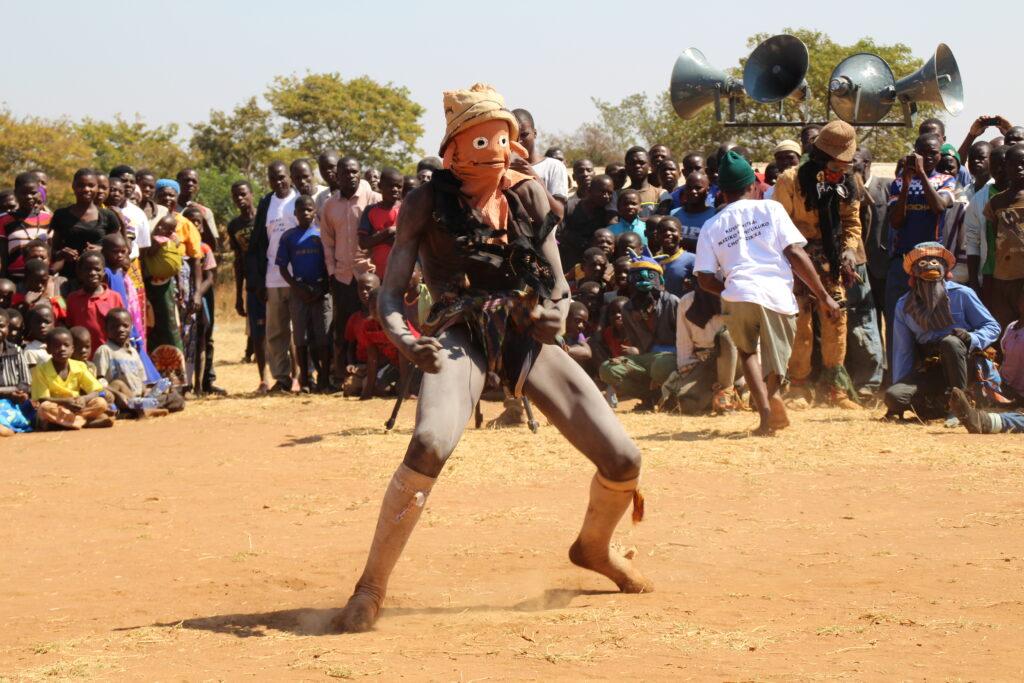 One sunny afternoon, Dzoole village in central Malawi is disturbed by three dancers. These masquerades’ faces are covered with wooden masks carved in the imitation of wild animals. They run around startling women, men and children. Their movements are frenzied, both feet digging into sand in quick succession and throwing up clouds of it. At intervals, they somersault onto the sand, all the while moving in unison then dart in different directions. Eventually they return to the ring of spectators that has formed since their arrival. Oftentimes, one of the masquerades breaks away to climb up a tree at great speed.

To the (literally) uninitiated, this is the Gule Wamkulu (“Big Dance”), an important cultural expression among the Chewa people of Malawi, Zambia and Mozambique. The masked dancers are regarded as a medium between the spirit world and the living. They also belong to a secret society.

When initiated into this society, members are taught to speak in a coded language and become adherents of the Chewa tribe’s religion. Previously, membership was reserved for men who had given proof of their bravery and endurance. These days, even young boys from the ages of 8 to 10 may be enrolled, though they have to sacrifice formal school education to do so. The Gule Wamkulu was recognised by UNESCO as one of the masterpieces of the oral and intangible heritage of humanity in 2005.

But not everyone is so enamoured. The secret society and its practices are increasingly being challenged by religious groups.

“Everything that happens at the Gule Wamkulu camps is evil. The songs, the metaphors and myths that are shared are evil and encourage the use of magic and spiritism,” says Purity Chamatwa, a Pentecostal preacher in the Malawian capital of Lilongwe.

He says that Christians sermons against the Gule Wamkulu are informed by the testimony of former initiates that have since embraced Christianity. Chamatwa considers the practices they described as pagan.

This religious opposition to the local tradition has long roots in history. According to Chief Nkukula of Dowa district, early Christian missionaries campaigned against allegedly “evil rituals”. They urged people against engaging with the Gule Wamkulu, as many Christian preachers continue to do today.

As then, however, proponents of Gule Wamkulu stand their ground. They are vehemently opposed to what they see as foreign influences including Christianity and Western education.

“Gule Wamkulu performances are a reminder of the laws given to us by our god (Chauta) through our ancestors,” says Nkukula. He says the tradition is an integral part of Chewa heritage and is beneficial to society at large. During the Gule Wamkulu initiation, for instance, he says that boys are taught how to respect each other and take care of their elders.

Ezaius Mkandawire, a filmmaker and cultural activist, agrees. He believes that the Gule Wamkulu needs to be protected from the “cultural fallacies” created by Western influences. He stresses that this is necessary to help future generations understand their cultural identity.

“There is currently a cultural awakening that has made people realise that Western thinking is killing even the most important aspects that hold our society,” he says.

Some people, however, feel both traditional and Western religion can coexist. Stanley Msonthi, a Chewa man, has managed to strike such a balance. He is a Western-educated Christian who continues to practice the Gule Wamkulu customs, but says some compromises may be necessary.

“The continued existence of the Gule Wamkulu cultural expression hinges on the adoption of current religious understanding and getting rid of primitive aspects such as the anti-school attitude and the strong belief in witchcraft,” he says.

Claude Boucher Chisale also believes the two practice are compatible. A Catholic priest from Canada, he was initiated into the Gule Wamkulu a few decades ago and given the name Chisale. In 1976, he founded the Kungoni Center for Culture and Art, which initially started out as a woodcarvers’ cooperative but soon grew to include an ethnographic museum on the Chewa, Yao and Ngoni peoples of Malawi. For over 40 years, Boucher has sought to create a dialogue between Christianity and Gule Wamkulu expressions, even fusing the latter in church practice.

Despite some like Chisale and Msonthi believing the two cultures can co-exist, however, it appears that the conflict members of the secret society and Christianity will persist for the foreseeable future. The Gule Wamkulu masquerades continue to scare the uninitiated who oppose the tradition, while the determination of those who wish to preserve it only grows stronger.

Madalitso Kateta is a freelance journalist based in the Malawian Capital, Lilongwe. As a freelance journalist, Kateta has contributed to a number of international reputable media outlets including, Thomson Reuters Foundation, Climate Home News, Equal Times, The New Humanitarian and CBD-Intel among some. He specializes in developmental reporting, his core interest being in culture, gender and child rights, environmental and economics reporting.