Barefoot Doctors and Pandemics: Ethiopia’s Experience and Covid-19 in Africa Newly elected Director-General of the World Health Organization (WHO) Tedros Adhanom Ghebreyesus attends a news conference at the United Nations in Geneva, Switzerland, May 24, 2017. REUTERS/Denis Bulbous

World Health Organisation Director General Tedros Adhanom was elevated to the most important position in global health in 2017, because of the outstanding advances in public health in Ethiopia over the last 30 years.

Ethiopia’s health revolution began as a political revolution: with the 17-year long people’s war waged by the rebel forces of the Tigray People’s Liberation Front (TPLF) in the field. During its time as a liberation front, the TPLF controlled vast areas with millions of inhabitants, that brought with it responsibilities of delivering state services on a shoestring budget. The TPLF was compelled to develop a health policy for its liberated areas. The alternative was losing the support of the people—and defeat.

The revolutionaries’ health policy was informed by three critical issues. The first was that most killer diseases were all preventable infections: they were either vector-borne such as malaria, water-borne such as Cholera, or food-borne. All could be minimised by measures such as better sanitation, health education, and local environmental planning, such as clearing pools of stagnant water where mosquitoes breed. The second major challenge was a critical scarcity of trained personnel and a dire shortage of medical supplies. It was easier and cheaper to focus on elementary-level health than to try to develop a sophisticated treatment capacity. So, in the tradition of revolutionary ‘barefoot doctors’, the TPLF focused on training workers for health education and sanitation works, rather than investing in more qualified physicians and building hospitals. Therefore, during the war, the TPLF’s liberated area health policy prioritised prevention rather than treatment.[i]

This revolutionary people-centred health policy resulted in the massive training and deployment of elementary-level public health workers. Villagers organised themselves to prevent malaria by drying wet areas, cleaning vegetation suitable for insect breeding inside their villages and using simple measures to protect from insect bites. They adopted basic sanitation and food hygiene practices—simple measures such as hand-washing that are now appreciated as vital to staying healthy when threats of contagion abound. Despite the famine and war of 1985, the liberated areas of the TPLF were kept relatively safe from Cholera and similar water-borne epidemics even though these diseases killed as many people as hunger itself in government-controlled parts of Ethiopia.

On taking power in 1991, the Ethiopian People’s Revolutionary Democratic Front (EPRDF)—the coalition led by the TPLF — transferred many of its lessons learned to government. In a famous press conference after entering the capital city Addis Ababa, Meles Zenawi, the Secretary General of the EPRDF, stated that a main goal of the government was for Ethiopians to be able to eat three meals a day. A former medical student himself, Meles laid equal emphasis on health. The new policy focused on primary health care educators and resource allocation towards health prevention inputs. Now in government, the EPRDF had access to far more resources, and programmes such as providing bed tents treated with mosquito repellant chemicals, and the administration of vaccines and similar health preventive inputs, were rolled out across the country. 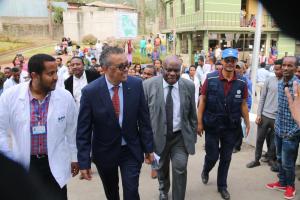 The EPRDF government’s health policy built on its previous experience: it was people-centred and prevention-focused, taken to national scale. It melded the revolutionary, people-centred political spirit with the best expertise in the country.

After serving in regional health bureaus in Ethiopia, Dr Tedros became Health Minister in 2005 and served in that post for seven years. Building on the existing policies, during his time in office, Ethiopia almost doubled the number and distribution of health workers. It trained over 34,000 community-based health extension workers.

The Health Extension Program (HEP) was the flagship achievement of the Ministry of Health under Dr Tedros’s guidance. It enabled Ethiopia to achieve significant improvements in maternal and child health, hygiene and sanitation, knowledge and health care seeking, and major reductions in infectious disease morbidity. The HEP has been a learning organisation that adapts itself to community demands. It is also dynamic enough to shift tasks between health centres and community. The programme spearheaded achieving the goal of providing insecticide-treated bed-nets coverage to the entire population living in malaria-prone areas. Coverage for 50 million persons at risk was achieved by July 2007.

As a result, Ethiopia achieved improvements in life chances without precedent in the country’s history and with few parallels anywhere in the world. During the 25 years 1990–2015—the era of the Millennium Development Goals—Ethiopia achieved a 67% reduction in under-five mortality; a 71% decline in maternal mortality; a 90% decline in new HIV infections; a decrease in malaria-related deaths by 73%; and a more than 50% decline in deaths from tuberculosis.[ii] Life expectancy in Ethiopia reached 66.7 years in 2019 as compared with 51.9 in 2000—one of the fastest increases anywhere in the world.

Tedros does not claim individual credit for these achievements, and rightly so. In the political culture of the EPRDF, individual heroes are not singled out, and leaders are expected to share praise with their comrades and the organisation as a whole. Obviously, Tedros as a career public health professional in Ethiopia should take his share of the credit, partly as a leader and partly as someone who recognised the value of his colleagues and the institution as a whole. It is hoped that current incumbents understand the fact that it is the comprehensive and multisectoral nature of the health policy and its approach that was behind the phenomenal achievements of the health system and commit themselves to continue this approach and address some of its recognised limitations.

At the helm of the WHO today, Tedros should not forget the philosophy of public health that brought him to who he is. The Ethiopian Ministry of Health under the EPRDF won international plaudits for its professionalism and efficiency: a model of a well-run bureaucracy that could deliver results far in excess of most of its peers across the developing the world. But those successes were built upon doctrines of community-based public health, forged in the hardships of war by a guerrilla front that knew its survival depended on the trust of the people, so that it had no alternative but to deliver on effective, community-based health. Faced with the crisis of the coronavirus pandemic, Dr Tedros should not rely solely on the medical expertise and the top-down public health models that he inherited at the WHO—he should draw on the legacy of the community-based, people-centred health strategies that transformed the life chances of a hundred million Ethiopians.

[i]Mulugeta Gebrehiwot Berhe, 2019: Laying the Past to Rest: The EPRDF and the challenges of Ethiopian state-building, Hurst Publishers, London, 2019, pp. 134–5.

In fighting slavery in Mali, some favour ...