In fighting slavery in Mali, some favour dialogue, others confrontation.

Caste systems in parts of Mali define what people can and cannot do. Nobles call it tradition. Opponents call it hereditary slavery. 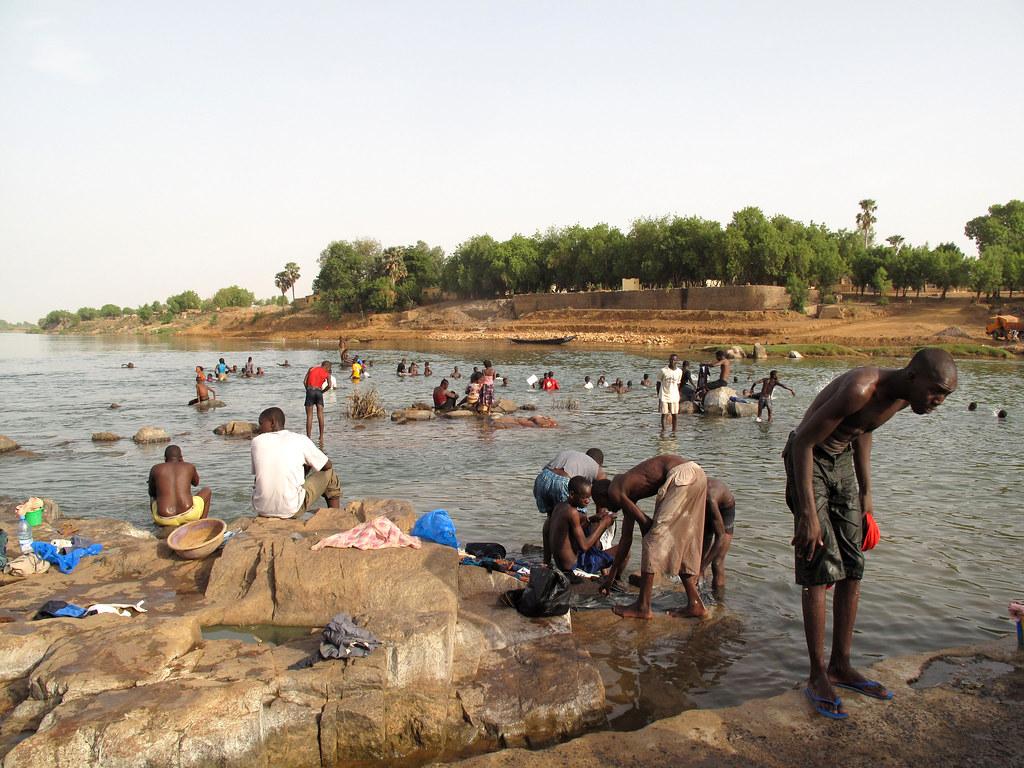 On the banks of the river in Kayes, Mali. Credit: Emeline Hassenforder.

For Diagley Kanouté, an anti-slavery activist in Mali, no danger is too great in the struggle for liberation. Formerly enslaved himself, Kanouté insists that the threat of being chased and beaten, or of losing the security of one’s community and livelihood, are all risks worth taking.

“Our freedom is priceless”, he says with a wry smile.

Kanouté leads a network of activists in the Kayes region of western Mali, near the border with Mauritania. Under the banner of an organisation called Gambana (“equality” in Soninké), they encourage hereditary slaves to declare independence from their masters. Since 2017, over two thousand people have heeded their call before being forced to flee the area fearing retaliation.

In parts of Mali, feudal societies – like the Soninké, Malinké and Fulani – are traditionally divided into social castes. In this system, some are born to be nobles, chiefs, artisans or storytellers know as griots. Others – an estimated 200,000 people according to Gambana – are born to be slaves.

In some Soninké villages, the lives of enslaved people are tightly restricted. They are not permitted to become mayor, participate in village meetings, own land or marry outside their caste. During celebrations such as weddings or births, they’re expected to fetch wood and water, and slaughter the animals. Nobles call it tradition. Opponents call it hereditary slavery.

Kanouté and his fellow activists aim to break the taboo of slavery by confronting the slaveholding establishment. They are supported by diaspora members, who make up the bulk of Gambana’s network. From the group’s headquarters in France to North America, these activists use social media to expose Mali’s political and business elites with ties to slavery and plead with their extended family in country to claim their freedom.

But declaring one’s freedom is no easy feat for enslaved people. It can result in the loss of their home, land and resources and lead to public floggings. Clips have emerged of men who tried to escape from slavery writhing in the dust, arms and legs bound, as screaming youth kick and taunt them. Gambana circulate these as proof of slavery’s crimes.

For their part, chiefs and their supporters deny the existence of slavery and hit back at Gambana activists and their relatives. They accuse the organisation of wanting to bring shame and instability to Kayes as well as being agents of western interference. They too spread the videos of men being beaten, but as a warning to those who would defy the status quo.

“Revolt will earn them respect”

Slavery was abolished in Mali under French colonial rule and its current constitution declares “all citizens free and equal”. These legal provisions have not proven sufficient, however, to prosecute slaveholders or prompt further action on the issue. In 2016, further anti-slavery legislation was proposed to parliament but later withdrawn when no MP would defend it.

This has left some activists hoping for international pressure. They point to the US’ suspension of aid to Mauritania in late-2019 citing the country’s lack of progress in combating slavery. The UN Human Rights Council has already been tracking abuses against slaves and anti-slavery groups, highlighting the absence of protection by Malian authorities, though with little effect.

Senior advisers in the Justice Ministry who helped draft the abandoned legislation say today’s political climate remains unfavourable for two reasons. Firstly, elected officials fear blowback from voters and elite networks in Kayes. Secondly, they worry that it could derail sensitive peace negotiations with separatist movements in the north, where slavery is also practised.

One ministry official, Boubacar Touré, conceded that victims of slavery are trapped in an oppressive status quo but said that state support is unlikely at present. Only a grassroots movement, he said, could alter these forces. “Revolt will earn them respect,” he added.

This insight perhaps vindicates Gambana’s approach, but it is not the only group campaigning against slavery in Mali. Others are mobilising but taking a less confrontational approach.

Some human rights groups, for instance, focus on how enslaved people will subsist after declaring their freedom. “Dignity starts with feeding your family,” the director of Association de Juristes Maliennes (AJM) told African Arguments.

To help with this, legal aid groups are using Mali’s courts to produce birth certificates for those who have no legal existence. One young beneficiary, Sambou Nomogo, said of his birth certificate: “It’s a source of pride for me. Since birth I’ve had no official documents so this is a form of independence.”

Instead of naming and shaming local elites with ties to slavery, Temedt and others organise local hearings to enhance understanding on all sides. Framed as “community dialogue”, local officials, tribal elders and religious figures are invited to share views on slavery and violence without insults or threats. The aim is to preserve social cohesion despite conflicting interests. These public hearings are not immune to charged language but are conducted peacefully.

Another local actor, Association Regard aux Couches Vulnerables (ARCV), emphasises its neutrality. Acting as a mediator, it reaches out to mayors and prefects even where these leaders are allied with slaveholders. Gambana, with its “zero tolerance” policy, views ARCV as too soft on pro-slavery elites.

According to some, many enslaved people prefer a less confrontational strategy. A paralegal with Coalition Malienne des Défenseurs des Droits Humains (COMADDH) says that their approach of working more closely with people allows them to “feel heard and part of something bigger” and avoid hostility. “They’ve come to see Gambana as provocateurs, uninterested in slave perspectives and priorities. So slaves have begun avoiding them,” added the activist.

Through the work of Temedt, ARCV, AJM, and others over the last 18 months, nearly 100 former enslaved people have gained their freedom through negotiation. In Diema, third-party mediation by the local prefect proved productive with the official able to control outbursts by masters who became abusive.

These efforts have been effective for a small number of formerly enslaved people, but if Mali is to overcome broader oppressive structures much more needs to be done. Without official recognition, legislation and enforcement, slavery will continue.

Prosecuting abusive slaveholders is one possible approach, though Mali’s weak judiciary and increasing insecurity across the south means few lawyers are available and many local courts have closed. Meanwhile, the culture of denial remains strong in many areas. One often hears the view that “we have no problem, it’s the activists who bring the problems”.

Whether through Gambana’s confrontational approach or its counterparts’ more conciliatory efforts, many more years of grassroots activism will be needed to uproot slavery in Mali.

Edward Rackley is an adviser to security and governance programming in fragile and conflict states. He has worked in Niger and Mali for the United Nations and USG, but the analysis and findings presented here are his own.

Cost of living protests descended in riots last month. Food and fuel prices are set to rise further. In late-April, protests against the soaring cost of living erupted in cities ...
By continuing to browse the site you are agreeing to our use of cookies.